But Not Much Else

Failed military tactics, failed financial policies -- it's all in a day's work for the Bush administration. Finding Saddam Hussein certainly won't make up for incompetence at the top. 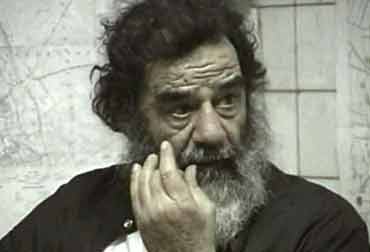 Saddam is in custody, but the war's not over yet. The U.S. faces several important hurdles in the bringing the war to an end and extricating U.S. troops from a seemingly endless fracas.

The most critical problem involves the ceaseless guerrilla attacks. According to a series of interviews with Iraqi guerrillas conducted by the French Press Agency, the guerrillas are composed of three main groups, only one of which supports Saddam Hussein. Of the other two groups one is Iraqi Islamists, who are fighting to drive the infidel Americans from Iraq's holy places. The third group is composed of nationalists -- disaffected, anti-Saddam, former Baath party members and other pan-Arabists -- who are fighting a war of liberation. And, unsurprisingly, these groups often coordinate their attacks, to devastating effect.

Nor is it safe to assume that the pro-Saddam faction is now beheaded. U.S. military officers said that, when they pulled Saddam Hussein out of his hole in the ground, he had no radio or other communications equipment. Clearly, he wasn't coordinating any attacks, issuing any orders, or in charge of any guerrilla movements.

The main value of having Saddam in custody is that it removes a symbol, a source of inspiration for a sizable contingent of the guerrillas. But to hope that this will bring an immediate end to the war is to forget how adaptable human loyalties are. If Saddam Hussein has not been directing guerrilla attacks, someone else surely has, and that person or group of people command as much or more loyalty than Saddam ever has. In the end, a figurehead is merely a figurehead; the people who do the practical work -- who have the face-to-face contact and provide the weapons and money -- are the ones who command the loyalty of their troops. And not all the guerrillas look to Saddam for inspiration -- not when there are plenty of other reasons to rebel in Iraq these days.

Such tactics include: destroying buildings suspected of being guerrilla hideouts, bulldozing the homes of suspected guerrillas and their family members, arresting the relatives of suspected guerrillas and/or people who may have information about the guerrillas, and surrounding entire villages with razor wire, forcing the occupants to pass through a single checkpoint in order to come and go. If people can't make it back through crowded checkpoints before curfew, they have to spend the night in the desert. At these checkpoints, Iraqis must show ID cards issued by the U.S. military and printed only in English. Humiliated Iraqis are drawing clear parallels to the Palestinian situation, and that should be a warning sign for the U.S. military. Unfortunately, it's going unheeded.

Lt. Col. Nathan Sassaman, the man in charge of surrounding the village of Abu Hishma with razor wire, told the New York Times, "With a heavy dose of fear and violence, and a lot of money for projects, I think we can convince these people we are here to help them." A sign posted on the wire fence reads "This fence is here for your protection. Do not approach or try to cross or you will be shot."

One of the "heavy doses of fear and violence" that the U.S. military is currently employing is the use of assassination squads, modeled on the same squads the Israeli Defense Forces (IDF) have used in the West Bank and Gaza Strip. The U.S. military's new Task Force 121 is being trained by the IDF at Fort Bragg to carry out assassinations of suspected guerrilla leaders. The Guardian newspaper of London recently noted that U.S. special forces teams are already operating inside Syria in an attempt to kill "foreign jihadists" before they cross the border, raising questions of "who is a jihadist and how do we define that?" and "how do we know who's planning to cross the border?" -- not to mention the ultimate question of the legality of assassination under international law.

At least one of those questions can be answered. A principle planner behind Task Force 121 is Lt. Gen. William "Jerry" Boykin who, in October, told an Oregon church congregation that the U.S. is a "Christian army" at war with Satan. Such fanatics will stretch the definition of "foreign jihadists" to cover whomever they wish to target. And such brutal tactics will be as successful in Iraq as they've been in the Occupied Territories, where assassinations have led to ever more militant attacks against Israeli troops and civilians.

On the "money for projects" end, the Bush administration has failed miserably so far. The major donor's conference in October brought large pledges, but few of them have been honored because of the deteriorating security situation in Iraq and the ongoing, world-wide economic slump. The bulk of the money for reconstruction in Iraq will come from the U.S. -- money that is swiftly disappearing into the pockets of U.S. corporations, like Halliburton, which was recently excoriated for an overpriced contract to ship gasoline into a country that holds the world's second largest oil reserves.

The rest of the funds will come from the World Bank and the IMF in the form of loans. But, before those funds can be released, the U.S. has to negotiate with Iraq's pre-war debtors to forgive massive loans left over from the Saddam era. In typically brilliant fashion, the Pentagon issued a directive last week that bars French, German, and Russian corporations from bidding on contracts for reconstruction in Iraq. Well, guess who owns most of Iraq's pre-war debt? European nations and Russia, that's who. Vladimir Putin, offended by the Pentagon's action, last week adamantly refused to forgive some $8 billion of Iraq's Saddam-era debt.

Failed military tactics, failed financial policies -- it's all in a day's work for the Bush administration. Finding Saddam Hussein certainly won't make up for incompetence at the top.

Maria Tomchick's writings have appeared on Alternet, Znet, the CounterPunch website, Common Dreams newswire, MotherJones.com and AntiWar.com. She is a co-editor and contributing writer for Eat The State!, a biweekly anti-authoritarian newspaper of political opinion, research and humor, based in Seattle, Washington.  Coutesy, Znet

Sources for this article include:

We Finally Got Our Monster