Earlier, 1,000 farmers had submitted individual affidavits in the High Court against the land acquisition process. 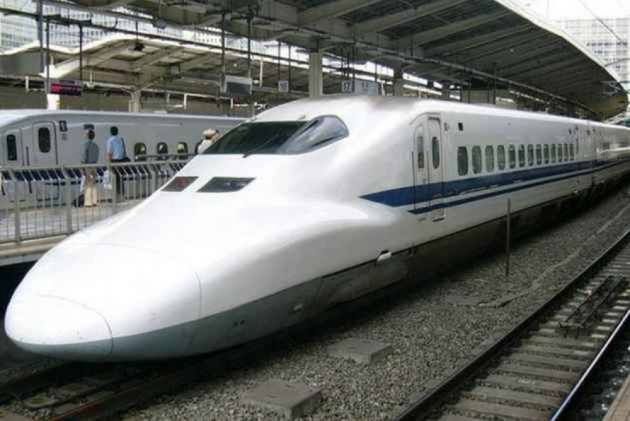 As many as 40 new petitions have been filed in the Gujarat High Court by farmers challenging the land acquisition process for the Mumbai-Ahmedabad bullet train project.

A division bench of Chief Justice R Subhash Reddy and Justice V M Pancholi is likely to hear the petitions on Thursday along with similar pleas submitted in June this year.

The 40 petitions have been filed even as four pleas of farmers from Antroli village in Surat district were withdrawn recently.

A station for the bullet train is planned to be constructed in this village.

"As against that withdrawal, 40 more petitions were filed by the affected farmers, and the Gujarat Khedut Samaj intends to file 200 petitions by the weekend covering more than 150 affected villages," said Anand Yagnik, the lawyer of petitioners.

He said the latest petitioners hailed from Surat, Valsad and Navsari districts of south Gujarat.

Earlier, 1,000 farmers had submitted individual affidavits in the High Court against the land acquisition process.

In their petitions, the 40 farmers have said that since the project extends to more than one state (Gujarat and Maharashtra), the Centre is the "appropriate government" to acquire the land for it.

Another contention of the petitioners is that the market value of the land has not been revised, as required under Section 26 of the Land Acquisition Act.

The petitioners have also challenged the Gujarat Amendment Act 2016 which tweaked the land acquisition law of 2013.

"It (the Gujarat Amendment Act 2016) gives unbridled and unfettered powers to the state government to exempt any project in public interest from the social impact assessment (SIA)," they said.

The state government, in its reply, said since the width of the land to be acquired for the project is just 17.5 metres, the resettlement issues are minimal.

The Central government, however, is yet to file a detailed affidavit in the matter.

The ambitious bullet train project was launched by Prime Minister Narendra Modi and his Japanese counterpart Shinzo Abe in September last year. The bullet train will run at a speed of 320-350 kmph. There will be 12 stations across the 500-km stretch.

For the project, around 1,400 hectares of land will be acquired in Gujarat and Maharashtra, 1,120 hectares of which is privately owned. Around 6,000 land owners will have to be compensated.

Even as the issue of petitions has reached the court, farmers affected by the Ahmedabad-Mumbai bullet train project are planning to take the issue of "illegal acquisition of land" to Japan Prime Minister Shinzo Abe.

Claiming "flagrant violation" of the conditions of the contract between India and Japan, the farmers have alleged that the Japan International Cooperation Agency (JICA) is not acting as per the laws of that country.

JICA has extended soft loan of around Rs 88,000 crore to the Indian government for the ambitious project that envisages connecting Mumbai with Ahmedabad by the bullet train.

The project is said to be close to the heart of Prime Minister Narendra Modi.

However, farmers falling in the alignment zone for the bullet train in Gujarat, Maharashtra and Union Territory of Dadra and Nagar Haveli, have been opposing the acquisition of land.

The farmer representatives said on Monday that they have sought appointments with Abe and Japanese leader of opposition Yukio Edano "to brief them about the issues affecting the farmers".

They said they wanted to "raise questions about the impartiality of JICA in India, as the social and environmental guidelines are being violated flagrantly".

"We are planning to travel to Japan where we will hold press conferences in five cities, including Tokyo, Osaka, Hiroshima and Nagashaki. We will raise various issues pertaining to acquisition of land for the bullet train project," said Anand Yagnik, the lawyer of farmers who have approached the HC.

He said farmers have written to Abe and Edano stating that the acquisition of land has been adversely affecting the "statutory and constitutional rights" of the farmers.

"They (Japanese leaders) are provided with evidences about the arbitrary nature of acquisition of land which is contrary to the JICA guidelines," Yagnik said.

Despite receiving representation from 1000 farmers affected by the project, JICA is not acting as per the laws of Japan, the farmers have claimed.

"We have also told them (Japanese leaders) how JICA itself is violating the terms and conditions by not responding to the representation from farmers. A team of experts need to hear the grievances of farmers despite the farmers stating that the acquisition is leading to their involuntary displacement," he said.

Yagnik said that farmers are also contemplating legal action against JICA through his counterparts in Japan.