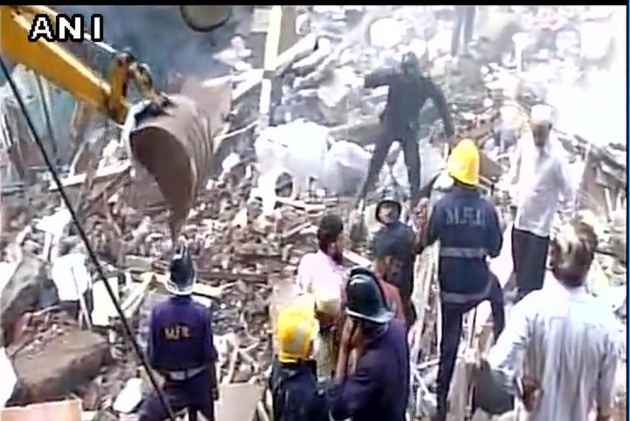 Nineteen persons were killed, 15 others injured, while around 25 people were rescued after a five-storey residential building collapsed in Bhendi Bazaar area of south Mumbai today.

The building, located at Pakmodia street near the J J Hospital, with 12 rooms and six godowns on the ground floor, crumbled at around 8:30 am.

According to fire brigade sources present at the spot, "There were around nine families staying in the building. Thirty people are feared trapped".

The disaster management cell of the Municipal Corporation of Greater Mumbai (MCGM) received a call about the collapse at 8.40 am.

"We immediately rushed fire brigade personnel to the site to rescue the trapped people," a senior MCGM official said.

A senior police official said seven persons, including an elderly couple, died and 13 others were injured in the incident. The injured were admitted to the J J Hospital.

Their identity is being established.

A 45-member team of the National Disaster Response Force (NDRF) is carrying out the rescue operation with the help of fire brigade personnel.

It is not known whether the building was on the list of dangerous structures under the MCGM limits.

The incident occurred two days after the city was pummelled by torrential rains, which may have caused damage to the building. (PTI)