The shortlisted works reflect a wide diversity of Indian writing, in terms of theme and language. Five novels have been shortlisted. 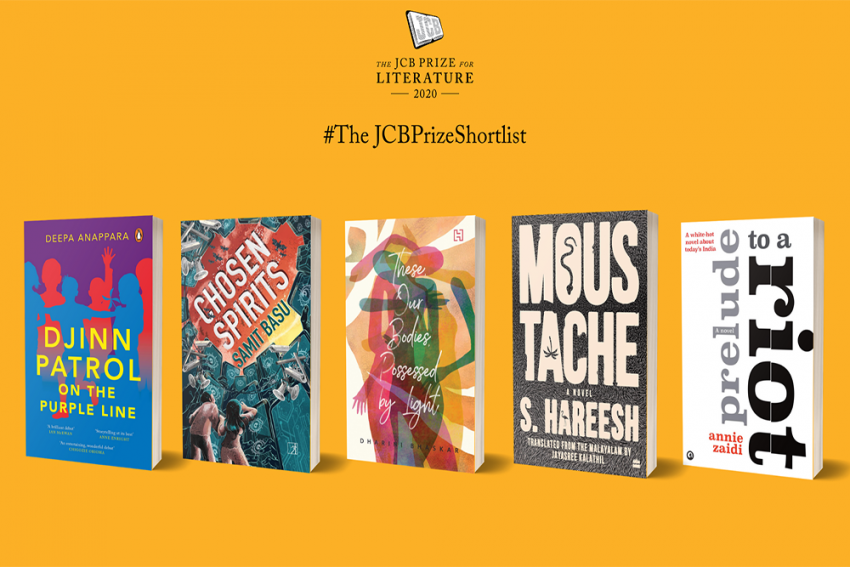 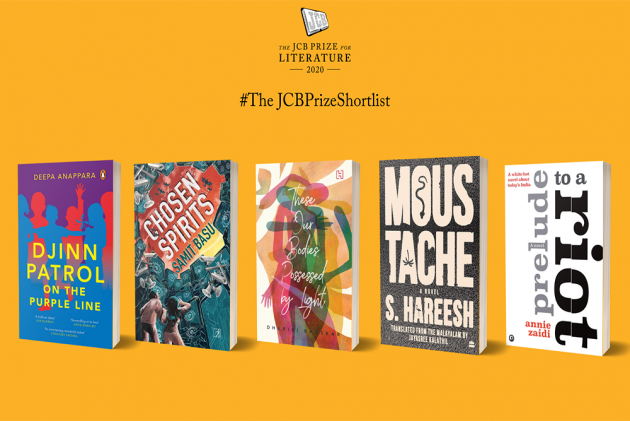 The JCB Prize for Literature has announced its shortlist for this year. This year’s five shortlisted works are Djinn Patrol on the Purple Line by Deepa Anappara, Chosen Spirits by Samit Basu, These, Our Bodies, Possessed by Light by Dharini Bhaskar, Moustache by S. Hareesh and Prelude to a Riot by Annie Zaidi.

Commenting on the shortlist, the chair of the 2020 jury, Tejaswini Niranjana, said, “What the shortlisted books have in common is their ability to pull out tendencies from our contemporary socio-political world in India and represent them through intriguing characters, sparkling dialogue, and accomplished narration.” The winner of the Rs 25 lakh JCB Prize for Literature will be announced on 7th November 2020.

A thriller set in the slums of an unknown Indian metropolitan, the Djinn Patrol on The Purple Line, follows the adventures of a group of slum kids out to solve the disappearance of their friend. The novel explores social inequalities and religious divide through the eyes of children, as the danger moves closer home.

Djinn Patrol on the Purple Line is Deepa Anappara’s debut novel and was longlisted for the Women’s Prize for Fiction 2020. A partial of the novel won the Lucy Cavendish Fiction Prize, the Deborah Rogers Foundation Writer’s Award, and the Bridport/Peggy Chapman-Andrews Award for a First Novel. It is being translated into 22 languages.

Deepa Anappara was born in Kerala and worked as a journalist in Mumbai and Delhi. Her reports on the impact of poverty and religious violence on the education of children won the Developing Asia Journalism Awards, the Every Human has Rights Media Awards, and the Sanskriti-Prabha Dutt Fellowship in Journalism.

A cautionary tale of a dystopian future, Chosen Spirits follows Joey, a reality controller - image builder for the famous, who is faced by unnamed evils each day at work and personal fronts. Whilst Joey wants to get her job done and keep her family safe, she is pulled towards forces set up for rebellion against the powerful in trying to help her friend Rudra, who dreams of changing the world they live in.

Samit Basu is an Indian novelist, film director and screenwriter. His first novel, The Simoqin Prophecies, published by Penguin India in 2003, when Samit was 23, was the first book in the bestselling Gameworld Trilogy and marked the beginning of Indian English fantasy writing. The other books in the trilogy are The Manticore’s Secret and The Unwaba Revelations. Samit also works as a film director and screenwriter. His debut film, House Arrest, was released as part of Netflix’s International Originals in 2019.

These, Our Bodies, Possessed by Light by Dharini Bhaskar (Hachette India, 2019)

Deeya, a middle child, struggles with the choice, of a life she wants and a life she has led herself to live. A journey into a labyrinth of stories from her past and that of her mother, grandmother and sisters is what she thinks will help her with an answer. Dharini Bhaskar, unravels the ‘fact and fiction that is family’ in a fascinating tale of five women across three generations.

Born in Bombay, Dharini Bhaskar has at various points also called Britain, Greece and Delhi home. Dharini was the former editorial director of Simon and Schuster India and was one of five young Indian writers selected for Caravan's Writers of India Festival, Paris. She has been published in an anthology, Day's End Stories, and in Hindu Blink and Arre, among other publications. When she isn't writing, Dharini backpacks, reads, and finds immense joy in being brought up by her son.

Moustache is as much about caste politics, oppression and gender parity as it is about the expansive landscape and changing ecology of south-west Kerala. The main character, Vavachan, is a lower cast individual who grows a moustache that takes on a life of epic proportion.

S. Hareesh is the author of three short-story collections: Adam, which received the Kerala Sahitya Akademi Award, Rasavidyayude Charithram, and Appan. He is also a recipient of the Geetha Hiranyan Endowment, the Thomas Mundassery Prize, and the V.P. Sivakumar Memorial Prize. Hareesh is also the author of two screenplays - for the film Aedan, which received the Kerala State Award for best screenplay in 2017, and for the 2019 film Jallikattu, which premiered at the Toronto Film Festival and won a silver peacock at the International Film Festival of India. Hareesh works in the revenue department, and hails from Neendoor in Kottayam district, Kerala. Moustache, is his debut novel.

Prelude to a Riot by Annie Zaidi (Aleph Book Company, 2019)

Narrated in a series of soliloquies, Prelude to a Riot captures the anxiety, fear, injustice, changing dynamics of India, and what it means to be 'Indian'. Children, young adults, and the old lay bare their innermost thoughts as tensions simmer, fault lines crack, while the whole community tries holding on to superficial social etiquette.

Annie Zaidi is the author of Bread, Cement, Cactus: A memoir of belonging and dislocation, Prelude to a Riot, Gulab, Love Stories # 1 to 14, Known Turf: Bantering with Bandits and Other True Tales, and the editor of Unbound: 2000 Years of Indian Women's Writing. She is the recipient of the Nine Dots Prize (2019) and The Hindu Playwright Award (2018) for her play, Untitled 1. Her work has appeared in various anthologies and literary journals including The Griffith Review, The Aleph Review, The Massachusetts Review, The Charles River Journal, and The Missing Slate.