How the Land Was Won

Odisha and the tale of Adivasi marginalisation. 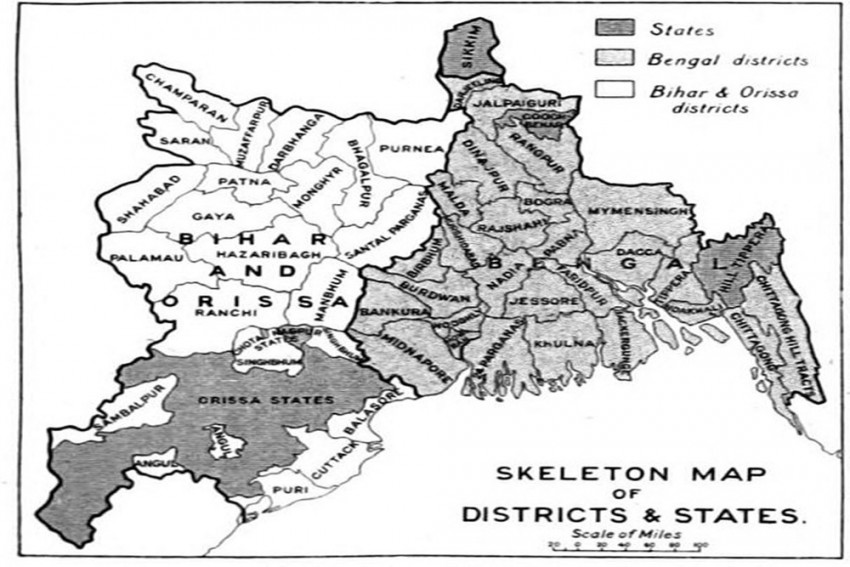 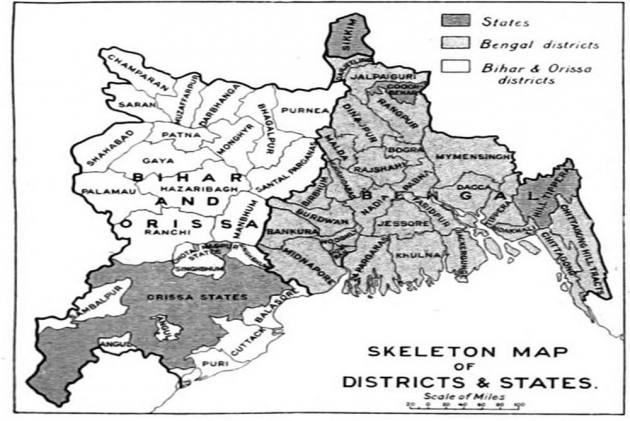 In the Satyajit Ray mystery The Acharya Murder Case—titled Bospukurey Khunkharapi in its original Bengali avatar and first published in the children’s magazine Sandesh in 1985—to solve a murder case, Feluda (Pradosh C. Mitter), the iconic super-sleuth, proposes a game of “twenty-nine” on the pavement behind Acharya mansion in Calcutta’s Bospukur, really late one evening, to keep an eye on the house. His cousin and assistant Tapesh, the Bengali thriller writer Lalmohan Ganguli (Jatayu) and the latter’s driver Haripada make up the other three members of this team of card players, dressed in dirty-looking dhotis and shawls as “Oriya cooks”, as suggested by the private investigator.

A large part of the labour that Odia writers and intellectuals have performed over the last 150 years is to battle such stereotypes (of Odias as dirty and fit only for manual labour) harboured by dominant neighbouring groups such as Bengalis, Biharis and Telugus. Two related strategies have been central to such processes: recovering histories of Odia language and literature, and claiming for these an ancient provenance; and envisioning a geographical region inhabited by speakers of the Odia language, contiguous as a territory and unified as an administrative unit.

Although an affective bonding with Odia language and the idea of Odisha as a sacred geography are not necessarily colonial inventions, the process of language-based identity-making perhaps started in earnest among Odia-speaking communities only during British Raj. In 1837, the Government of Bengal Presidency, through its Act Number 29, changed the language of revenue and judicial administration from Persian to Bangla, Odia and Hindustani. With the institution of Wood’s Despatch of 1854, these languages also became the medium of instruction of primary education and some secondary education in the areas in which they were spoken.

Odia occupied a peculiar place among these languages. In the 19th century, its speakers constituted minorities in three British Indian provinces (the Bengal and Madras Presidencies and the Central Provinces), besides being strewn across 26 princely states. The undivided districts of Balasore, Cuttack and Puri were located in the then Bengal Presidency as a Division, and had the largest number of Odia speakers under any one unit of administration.
It is here, in the Orissa Division, that the first steps were taken towards finding the Odia language its “natural home” and for uniting all its speakers. These began as a reactive measure to oppose campaigns in the 1860s and 1870s by a section of the Bengali intelligentsia that claimed Odia as a dialect of Bangla. This section of Bengalis then went on to argue that the language of schools, courts and administrative offices of the Orissa Division should be Bangla and not Odia.

The Flowering of the ‘Odia Renaissance’

In 1866, a massive famine rocked the districts of the Orissa Division, killing off nearly a third of the population. A newspaper called The Utkal Dipika was started that year to articulate issues related to famine relief, socio-economic progress of the Division, and the development of Odia language and literature. Soon, similar initiatives were started elsewhere in the Odia-speaking areas. Bangla was unable to replace Odia in the Orissa Division, and soon there was a printing revolution led by the publishing of school textbooks.

By the end of the 19th century, there was a thriving culture of debate across the Odia-speaking regions around the production of textbooks, their quality and authors, and which texts from the older Odia canon were to be used in schools and why. Controversies raged about the appropriateness (or otherwise) of the works of pre-colonial writers such as poet Upendra Bhanja. Their work was seen an unsuitable for young minds due to its erotic content and the apparent lack of pedagogic value. The debates surrounding textbooks slowly produced an Odia literary cannon whose premise was a certain broad humanism.
The revolution brought about through printing technology in the last third of the 19th century also aided in this process, as many older classics that existed only in the form of palm leaf manuscripts till then were reproduced as printed books. Newer, modern literary forms were also domesticated during this period. But such a process did have its “outside”,— the works of tribal poets such as Bhima Bhoi and of innovations in traditional jatra theatre brought about by dramatists such as Baishnaba Pani, perhaps precisely because of their popularity, remained outside the literary cannon that was being formed. 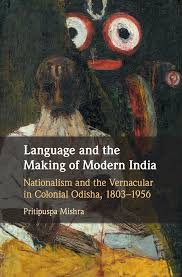 Along with the changes happening in the publishing field, associations and debating societies started cropping up across the Odia-speaking regions, in towns such as Cuttack, Balasore and Sambalpur. These were also the places where the first periodicals and newspapers in Odia started getting published. This formed a nascent and small public sphere comprising primarily the elite. A watershed moment in this regard was the formation in 1903 of the Utkal Sammilani, a pan-Odia organisation, whose main goals were the development of Odia language, socio-economic progress of Odia-speaking peoples and, most importantly, the unification of regions inhabited by them as one unit of administration. This latter process has been termed as the Desa-misrana (unifying the land) movement.

The Politics of Language and Odia as the Language of Politics

The Linguistic Survey of India that began in the 19th century and continued well into the 20th, had started cementing boundaries between languages, as it demarcated India into distinct regions inhabited by the speakers of these bhashas. It was a comprehensive survey of languages of the British Indian Empire and described 364 languages and dialects. This modern conflation of language and geography, coupled with the pre-colonial structures of emotions associated with these tongues, created the basis for language-based identity-formation. Initially, the Indian National Congress (INC) was not very comfortable with such identity politics because it saw itself as a pan-Indian organisation.

But two events finally made INC accept language-based communities as the basis of popular politics and processes of nation-building in India. The first was its advocacy of a united Bengal on a linguistic logic, following the partition of the province in 1905 into essentially a Hindu-majority Bengal and a Muslim-majority province called Eastern Bengal and Assam. The second were the Montagu-Chelmsford reforms that brought in the Government of India Act of 1919, according to which direct elections (with limited franchise) took place for the first time, including for Provincial Legislative Councils. This meant that the language of politics had to pluralise to include regional vernaculars, which were very important at the level of the provinces, and the interests of elite speakers of these languages had to be accommodated.
The case of Odia and Odisha formed the template through which language became the increasingly acceptable marker of identity in India. The ideologues of Desa-misrana, aided by the work of professional historians, argued for the existence of what they called ‘Natural Orissa’ that had been later fragmented through processes of successive colonialisms. Thus, Odia now came to have not only a community of speakers, but also a geographical region that was its supposed natural habitation. From being a movement for the protection of interests of Odia speakers, the Odia movement then grew to have a wider humanistic underpinning through the ideological work of a second-generation of leaders such as Gopabandhu Das (1877-1928).

‘Natural Orissa’ and Adivasi Communities as a Problem and a Resource

This also meant that some other justification was to be found for uniting ‘Natural Orissa’, as apart from Telugu- and Bangla-speaking minorities, this region also had a large number of Adivasi communities who spoke their own languages. These latter social groups comprised nearly a quarter of the population of the proposed British province of Orissa. The ideological justification of including the areas demographically dominated by these Adivasi groups in Orissa was provided through many stratagems by the ideologues of the Desa-misrana movement. These included highlighting those aspects of Odia language that had an Adivasi provenance, foregrounding the purported shared everyday existence of tribal and caste Odia groups, highlighting the Jagannath cult as a unifying force that apparently had tribal origins and had claims of inclusion through processes such as the Ratha Jatra, and the apparent suitability of Odias to carry out the colonial civilising mission among the Adivasis in a benign fashion.

But the inclusion of tribal-majority regions into Orissa (that was finally formed as a separate province of British India in 1936) and subsequently into other states of India created on a linguistic basis, such as Andhra Pradesh, Gujarat and Maharashtra, has not benefited Adivasi communities in any meaningful manner. Rather, the tribal people of peninsular India have become an almost invisible minority. They have often been violently removed from their lands in the name of development. Their cultural decline has sometimes been justifiably described as “cultural genocide”.

‘Language and the Making of Modern India’

The book under review by Pritipuspa Mishra chronicles these processes with a lot of sensitivity and scholarly attention to details. With the example of Odia and Odisha, the volume demonstrates how the marginalisation of Adivasi communities of peninsular India was almost an inevitable outcome of the process of creation of linguistic states.

Despite being an important addition to the literature, the book is riddled with mistakes of various kinds whose provenance is difficult to make out. I will mention only a few here. In page 87, the name of the poet Madhusudan Rao is misspelt as Madhusudan Roy and as Madhududan Roy. In page 100, the litterateur Fakir Mohan Senapati’s year of passing away is wrongly mentioned as 1911, when he in fact died in 1918. Many Odia words are inappropriately translated into English; e.g., in footnote number 7 in page 109, the word “byaghata” is mistranslated as “attack” when the contextual reference suggests it should be rendered as “impediment”.

The way the book has been produced, ranging from problems in a few of the footnotes to the presence of some unnecessary repetitions, make it obvious that it has perhaps been hurriedly cobbled together from essays written earlier and published elsewhere. Despite these reservations, the book contributes significantly to discussions on the relationship between language, politics, identity, place-making and marginalisation, and deserves to be widely read and circulated.

The volume makes it clear that the process of empowerment of vernaculars like Odia, especially through their territorialisation and the creation of linguistic states, has disempowered the Adivasi communities of peninsular India. This is perhaps a valid point that merits reiteration. But here one may ponder on a few lines from Sujata Bhatt’s poem A Different History: “Which language/ has not been the oppressor’s tongue?/ Which language/ truly meant to murder someone?”.

If we truly want to do normative social theory and imagine a world in which Adivasis are able to demand and get justice and equality as both individuals and communities, one needs to undertake the much-needed task of imagining social life without the State. In such a project, stories of how different linguistic groups collaborate outside of statist logics merit much more attention, than narratives of competition and subjugation.

Pritipuspa Mishra. 2020. Language and the Making of Modern India: Nationalism and the Vernacular in Colonial Odisha, 1803–1956. Cambridge University Press. 247 + xii pages. Available as an open access e-book at www.cambridge.org/core with Online ISBN 9781108591263