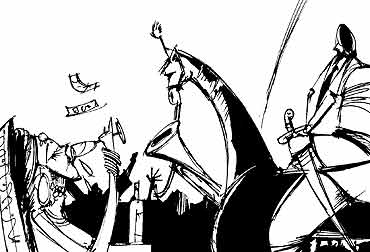 A cousin was getting hitched in Delhi, a love marriage that would further dilute the family’s already mixed-up UP Brahmin stock in a joyous celebration of India’s diversity.

Our very own Y, who drives barefoot and works with refugees, finally chose K, a lithe sardar of refined sensibilities and—obviously— impeccable taste in women.

My husband and I fled the snowstorms of our home in Seoul to plunge into wedding celebrations in Delhi.

I felt my way around this newness.

At the first theme bash, we had to wear one of the five Ks: kirpan, kachha, kangha, kada or kesh.

My husband, who shaves his head, wrapped a sky-blue cloth around his skull, donned a suit and dark glasses. He supplemented it with an earpiece for a mobile phone. At my mother’s theatrical suggestion, I braided my hair into two plaits and looped them above my ears. I couldn’t think of anything else. "Will they be offended?" somebody asked. A few phone calls were made to the groom’s side, and it was decided not. In the end, thumping Bhangra beats drowned out all doubts.

Y, the bride-to-be, had several vodkas, climbed onto the divan and proclaimed firmly to her betrothed— "Darling, I love you." A constellation of iPods kept the Bollywood tunes and Bhangra rhythms coming and we danced into the night.

"It’s not Gajra Re, it’s Kajra Re," my sister said. "NRI!" I learned that when a Sikh man travels, he might, for example, check the kind of door handle the hotel room has, to see if he can use it to help tie his turban. "Gurmukhi’s the script," said Ma.
"Isn’t it also a language?" asked someone. "Sardar means leader!"

On the appointed day, K came on a horse, surrounded by friends and relatives in crimson turbans. From a distance, us waiting UP relatives only saw hands twisting in the air, shoulders jumping and the joyous cacophony of a Karol Bagh band. K wore a splendid silk achkan and a sword and was clearly delighted to be marrying my cousin, who looked resplendent in her pink salwar kameez. I looked on in amazement, for UP-ites get married in an unadorned cotton sari dipped in haldi, bedecked with flowers only.

The Sikh hymns were mellifluous. I didn’t understand the words, but the music was stripped of drama and drifted simply around the congregation sitting cross-legged on white sheets. Y and K walked around the Granth Sahib under its canopy, and Y was escorted by her sisters and brothers-in-law around each quarter of the circle. It was a walk that tied each of us more tightly to the Punjab. The alliance was cemented in the only appropriate way —with feasting in the Delhi sunshine.