Holocaust survivors were shocked, because Netanyahu was really absolving Hitler, and the Germans in general, of the main blame for the horrendous crime. 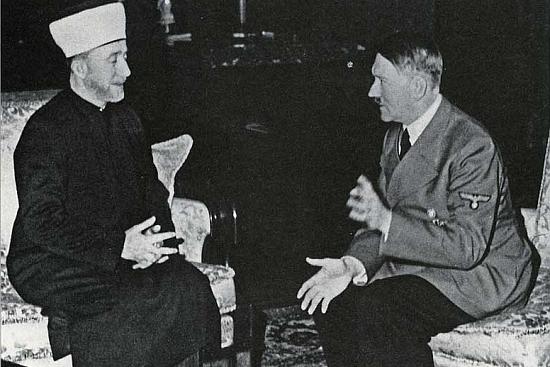 IT IS not very pleasant when serious people around the world — historians, psychiatrists, diplomats — ask themselves if my prime minister is completely sane.

But this is happening now. And not only abroad. More and more people in Israel are asking themselves the same question.

All this is the result of one event. But people are now looking at many other events — past and present — in a new light.

Until now, many strange actions and utterances by Binyamin Netanyahu have been seen as the manipulations of a clever politician, a talented demagogue who knows the soul of his constituents and supplies them with ample lies.

Not anymore. A troubling suspicion is getting around: that our prime minister has serious mental problems. Is he losing his marbles?

IT ALL started two weeks ago, when Netanyahu made a speech to a world-wide Zionist assembly. What he said was shocking.

Adolf Hitler, he pontificated, did not really want to exterminate the Jews. He just wanted to expel them. But then he met the Mufti of Jerusalem, who convinced him to "burn" the Jews. Thus the Holocaust was born.

The conclusion? Hitler was not so bad after all. The Germans are not really to blame. It was the Palestinians who were the instigators of the murder of six million Jews.

If the subject had been different, this speech could be considered as one of the usual lies and falsifications typical of Netanyahu. Hitler was really not so bad, the Palestinians are to blame, the Mufti was the forerunner of Mahmoud Abbas. Just a routine piece of political propaganda.

But this concerns the Holocaust, one of the most atrocious events of modern times, and by far the most important event in modern Jewish history. This event has a direct bearing on the lives of half the Jewish population of Israel (including myself) who lost their relatives in the Holocaust, or are themselves survivors.

This speech was not just a minor political manipulation, one of those we have become accustomed to since Netanyahu became prime minister. This was something new, something awful.

ALL AROUND the world there was an outcry. There are many thousands of experts on the Holocaust. Innumerable books have been written on Nazi Germany (including one by me). Every single detail has been researched over and over again.

Holocaust survivors were shocked, because Netanyahu was really absolving Hitler, and the Germans in general, of the main blame for the horrendous crime. So Hitler was not so bad, after all. He just wanted to expel the Jews, not to kill them. It was the evil Arabs who induced him to commit the atrocity of atrocities.

Angela Merkel did the decent thing and issued an immediate denial, assuming again the total blame of the German people. Thousands of furious articles appeared around the world, many hundreds of them in Israel.

This particular utterance of Netanyahu's was not just stupid, not just ignorant. It borders on the insane.

A MUFTI is a religious scholar, a high ranking authority in an Islamic society, well above a mere judge. A Grand Mufti is the highest local religious authority. In Islam there is no pope.

The Grand Mufti in this story is Hajj Amin al-Husseini, who was chosen by the British authorities in Palestine for the office of Grand Mufti of Jerusalem. As it turned out, this was a grave mistake.

The man who made the mistake was a Jew — Herbert Samuel, the first High Commissioner of the British Mandated territory of Palestine after World War I. Young Hajj Amin was already known as a firebrand, and Samuel followed the well-established colonial practice of appointing enemies to high office, to quiet them down.

The Husseini family is the foremost Hamula (extended family) in Jerusalem. It has some 5000 members and occupies an entire neighborhood. It is one of the three or four most distinguished families in town, and for many generations a Husseini has been either the Mufti, the mayor or another dignitary in Arab Jerusalem.

Hajj Amin (hajj is the appellation of a Muslim who has made the obligatory pilgrimage to Mecca) was a trouble-maker right from the beginning. He saw early on the danger of the Zionist immigration for the Arab community in Palestine, and several times incited anti-British and anti-Jewish riots. These came to a head in the Great Rebellion of 1936 — known to the Jews as "the events" — which shook the country for three years, until World War II.

During "the events", many Jews and many British were killed, but most of the victims were Arabs. The Mufti (as everybody called him) used the opportunity to have all his rivals and competitors killed off. For the Jews in Palestine he became the symbol of evil, the object of intense hatred.

By now, the British, too, had had enough of him. They chased the Mufti out of the country. He went to Lebanon, but when this country was occupied by the British in World War II (to drive out the troops of the French Vichy regime) the Mufti fled to Iraq, which was in the hands of anti-British and pro-Nazi rebels. When the British re-conquered Iraq, the Mufti fled to Italy, which was leading the Fascist "Axis" effort to win over the Arabs. The Mufti, whose main enemies were the British, acted upon the theory that the enemy of my enemy is my friend. (At the same time, a leader of the Jewish underground in Palestine, Abraham Stern, acting upon the same theory, also sought contact with the Italians and Germans.)

It seems that the Italians were not too keen on having Hajj Amin around, so the Mufti moved to Nazi Germany. At the time, the SS was trying to enlist Muslim volunteers for the war against Russia, and somebody had the bright idea that a picture of the Grand Mufti with Hitler might be useful.

Hitler did not like the idea at all. He was a true believer in the race theory, and the Arabs are Semites — an inferior and detestable race, just like the Jews. But in the end he was weighed upon to receive this Arab refugee for what we now call a "photo opportunity". A picture was taken — the only picture of the only meeting between these two persons. (There are also photos of the Mufti with Muslim Bosnian SS volunteers).

The meeting was short, a perfunctory protocol was taken, the Jews appear nowhere in it. The whole episode was insignificant. Until Netanyahu.

It is ridiculous to crown the Mufti as the father of the Palestinian nation. In all my hundreds of meetings with Palestinians, from Arafat down, I have never heard a good word about Hajj Amin, not even from the wonderful Faisal al-Husseini, a remote relative. They unanimously described him as a real Palestinian patriot, but a person with limited education and narrow-minded outlook, who bears part of the blame for the disaster that befell the Palestinian people in 1948. The bloodbath he carried out among the Palestinians in the 1936-1939 rebellion weakened the Palestinians so much, that when the crucial test came — the 1947 partition of Palestine and the 1948 war — the nation was devoid of any effective leadership.

The idea that the mighty Fuehrer needed or heeded the advice of a fugitive Semite in order to decide on the Holocaust is preposterous. Indeed, it is crazy.

Also, the dates don't jibe. The photo-meeting took place at the end of 1941. The extermination started immediately after the conquest of Poland in 1939, and took on its monstrous dimensions with the Nazi invasion of the Soviet Union in the middle of 1941. It acquired its final, industrial format when Heinrich Himmler, the SS chief, decided that "one cannot demand of a decent German" to shoot all this Jewish scum. The Mufti had absolutely nothing to do with this, and the very idea is insane.

Until 1939, Hitler did indeed further the expulsion of the Jews, because physical extermination in a peaceful Europe was unthinkable. But once the war broke out, he saw at once the chance for mass extermination — and said so quite openly.

SO HOW did this son of a "renowned historian" come to say this crazy thing?). (This appellation of Ben-Zion Netanyahu is now de rigueur in the Israeli media, though I never met anyone who has read his work on the Spanish inquisition.)

Perhaps he heard it from some crackpot hired by Sheldon Adelson — but even so, the fact that he did not reject it outright shows not only that he is a complete ignoramus about the most important chapter in modern Jewish history, but also that he may have some mental problem.

In this light, many others of his decisions now look different, including this week's decision to take measures to cancel the "inhabitant" status of tens of thousands of Arab Jerusalemites. When East Jerusalem was annexed by Israel in 1967, the inhabitants were not granted Israeli citizenship, only reduced resident's rights, which deny them the right to vote for the Knesset. They were graciously allowed to apply for citizenship individually, but, of course, almost nobody did, since this would mean recognition of the annexation.

Now I am afraid. If indeed we are governed by a man with mental problems — just where is he leading us?

SOME OF my friends complained to me that my last article contained — as Churchill would have put it — a terminological inexactitude.

I wrote that the Jews were not mentioned at the Hitler-Husseini meeting. That is a gross exaggeration. Everyone who knows anything about Hitler knows that the Fuehrer could not utter three sentences without mentioning the Jews. (Another gross exaggeration.)

The English version of the official transcript contains a total of about 2250 words. The Jews are mentioned 12 times — three times by Hajj Amin and nine times by Hitler. Hitler used all his stock phrases, the Mufti used blatant flattery. No one said anything new. Hitler politely rejected all the Mufti's requests.

According to Hitler the Jews ruled Britain and the Soviet Union (the US was not yet in the war.) If Italy and Japan had been on the other side, Hitler would have added them to the list.

At the time, November 1941, the extermination by the Einsatzkommandos was already in full swing. Obviously the Mufti did not know anything about this, nor did Hitler tell him. It was State Secret No. 1.

The transcript has been known for a long time. If Netanyahu's preposterous assertions had been true, our super-efficient propaganda machine would have reminded us and the world every single day.

About the Nazi's' regard for the Mufti: Hajj Amin stayed in Germany for another four years until the end of the war. Almost nothing is known about his stay there. Hitler never received him again. That's how important he was.

By the way, this week Netanyahu was compelled to issue a kind of denial — the Netanyahu kind. It says that Hitler was responsible for the Holocaust. It does not apologize.