The State wants to be the grand jury, playing patron like the old nawabs and rajas. But art is a sovereign nation... and just how do you summon a king to the court? 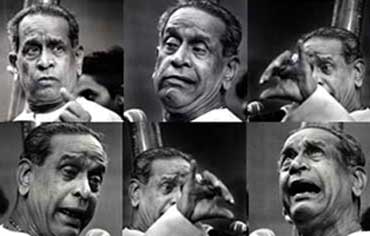 So now we have one more name there. Pt Bhimsen Joshi. He has been conscripted up into the gilded hall, to join the most exalted in India's official Book of Lists. We note this protocol moment with all the deference due to the man. To him we owe at least this--an honest attempt to separate the event from the man. It's conceivable that the young Bhimsen too, as he ran away from his home in the Deccan all those decades ago to join a life-long circus of exaltation, did not count the highest civilian honour in the land among the risks his journey might entail. And yet, the grand old duke of Kirana gayaki has taken the news of the Bharat Ratna manfully and graciously--"on behalf of all Hindustani vocalists".

There is, of course, nothing very horribly remiss here. A State that honours its artists is a darn sight better than one that believes in executing them. And every generation of artists distils from among itself, through the magical processes of gene selection peculiar to art, a self-knighted aristocracy. In the early days of jazz, in the absence of official certification, they went right ahead and literally named themselves King, Earl, Count, Duke, President and Chairman of the Board. But that by itself does not falsify the existence of true nobility among them. There simply are artists who rise above the mediocre and the merely artisanal.

You could try and trace the end of the Blue Period in the singing life of, say, a Mallikarjun or an Amir Khan to see when they passed through the mirror into that rarefied air--or wonder whether Bade Ghulam Ali indeed arrived readymade, sweeping in like some force of nature. You can lament truly blessed practitioners who went unwept into oblivion, even quibble whether this or that alleged beenkar is worth the greatness that is thrust on them. Yet, once someone is irreducibly, ineluctably great--and society has partaken of this greatness--everyone knows it.

It is striking how, for all the sharp dissonances you expect in matters of taste, so many of our formal investitures are attended by an almost universal consent. In lining up our Hall of Famers, only the order of priority remains an open question. And since there is no scientific means to determine an exact hierarchy of the sublime, we can safely leave that to fate and the laws of caprice that move the spheres. Suffice it to say for the moment that Pt Bhimsen Joshi is certainly a name that belongs among, to borrow a phrase from the Indian Penal Code, "the rarest of the rare".

Why does it then feel so strangely flat, this goody-goody spectacle of a maestro being smothered with a sarkari shawl? Ah, there it goes again, we say, that little red blip on the Culture Sensex…. It is vital that we harness our tacit cynicism into something more positively irritating and ask questions. Can official honour express, leave alone exhaust, society's sense of gratitude to those who touch the base metal of life with a hint of gold filament, who animate the subtlest of fibers? Can it ever rise above the necessary follies of selection and exclusion? You are always going to be privileging a certain set of values over others--you don't need Macmohan to be on the jury for judgements to be subjective. And in any case, before comparing a Multani on slow simmer from an Abdul Wahid Khan to say a Sanjay Subramaniam javali, do we not need to make the basic error of relativising the value of absolutes?

Maybe there is a still deeper 'false connection'. Something fundamentally askew in the equation between--if we must put it so grandiosely--the State and arts. The classic liberal position is that it is essentially a misalliance. This does not stem merely from the fear of the artist being coopted, the aesthete's distaste at the alacrity with which they can get down to business and mint a Raag Priyadarshini. One suspects it goes beyond that, to its root credo. If every individual is to be deemed a model of self-government, every artist must necessarily be an autarky. There can be no movements, no genres or genealogies, no sources of inspiration. Ragtime cannot take from minstrelsy, Debussy must never have heard gamelan, Abdul Karim Khan never wandered Southwards, nor did Dikshithar go to Benaras. There can be no pre-existing structures too, no blue notes, only the random distribution in humankind of a mystery substance called genius.

Okay, that was exaggeration…but it's a thin margin of error. It is plain that a primary distrust of too much consensus and a preference for the solitary splendour of the stark, raving artist-in-his-attic is a running theme that has left its mark even on the mainstreams of criticism (which are, delightfully, movements in their own right!). Thus it is that we come to savour bursts of creative violence: the source of the universal modern feeling that art, to be vital, must periodically break out of received categories and be a disruptive force. The idea of such transgressive moments receiving official sanction is laughable. The Marquis de Sade was in no danger in his lifetime of being conferred with the Chevalier de la Legion d'honneur. No one would have given Ornette Coleman the Pulitzer in 1960, when he actually cracked a genre wide open. Bird and his bebop crowd were thought to be peddlers of a disreputable musicianship and elder jazzmen would keep a distance from them. Lawrence, Lolita…the connection between scandal and art seems intimate, even necessary. There is no way of resolving this, short of saying that the only true relationship that ought to exist between the state and the arts is one of censorship….

Ramachandra Guha, whose interest in history segues smoothly into contemporary affairs, offers us visions from a sun-drenched antipode. A happy marriage, no less. He has written that he was once coaxed (without too much difficulty) into publicly recommending the Bharat Ratna for M.S. Subbulakshmi and Lata Mangeshkar--only, he added to it the names of Ravi Shankar and Bismillah Khan. All four, he noted with satisfaction, duly got the award. His choices, as they stand, are of course unimpeachable: the very best, very centre-of-centre, very elegantly Nehruvian.

Guha also wished to see this award rescued from politicians and restored to the authentic soul of India. If he planned for us a collective escape to a realm of grace and purity, it was thwarted by the arrival of pettiness and ego on this blemishless landscape. Put it down to our flawed, axiomatic treatment of greatness. For, there can be (a) borderline cases and (b) those who might have unfairly been denied of club class privileges. Kishori Amonkar (b) had serious issues with fellow Goanese nightingale Lata; Jasraj (a) couldn't fathom how the public estimation of Ravi Shankar could exceed his self-image. Ram Guha ought to have cited to them all the world eminences who narrowly escaped the infamy of a Nobel.

Maybe, disturbed by the contretemps, Guha has demitted office--but whoever has replaced him as spokesman for the silent majority, we can be sure, s/he would heartily approve of Bhimsen. He makes the grade. And this is a modern, benevolent strain of political thought, a reformed Platonic ideal. The poets are to be rehabilitated in the republic, all those spotted butterflies being blown around in divine afflatus are to be netted and seated in ordered ranks, jewels in court in the service of an ordered society. In the soft regime of the poet laureate, palaces are made of volcano ash.

Actually, in a land where the master culture is still not that of the literate but the oral--rather, sruti or the heard--it is not surprising that the highest honour has gone four times to musicians and not even once to a litterateur (unless you count the near-miss of the millennium, A B Vajpayee, as a poet). Could the non-argumentative nature of music have something to do with this? I can remember someone who had difficulty adjusting to Indian classical music because, he said, unlike other art, it did not seem to have any subversive, revolutionary potential! Not being a keen student of the applied arts, the thought hadn't occurred to me. Well, it does have, at one level, a harmonising, balance-restoring effect. And indeed, what is ati-vilambit if not the stricken, trance-like, super slow motion of the bullock cart, the very nucleus image of modern India's self-loathing? In its passage, only the faintest difference exists between motion and a creeping stillness--it's the most distilled form of status quoism you could get.

Happily, the converse view is possible. A noted music critic--from the South, but musically bilingual--once wrote on the kernel difference between Hindustani and Carnatic as he saw it. In his book, it was not held to exist on musicological grounds, but on spiritual territory. He wrote that the northern strain had the potential to lead a person astray--he said that approvingly--and the southern school engendered decorum and obedience. If there can be unforeseen complications in the interplay between personal politics and music, why deny the public sphere its share of problematics and ironies? The number of khayal bandishes that sing the praise of Mohammed Shah Rangeela--on whom there is resounding consensus in political history for being the biggest joke of the Mughal era--can fill a big book. In more innocent times, Rajendra Prasad once asked Amjad Ali Khan's father Hafiz Ali, an early recipient of a Padma award, whether there was anything he could do for him. The gentle Khan, with a touching naivete unimaginable today, merely said: "Please take care of the Darbari raag, if you can." And Bhimsen, who everybody remembers for singing the Mile sur anthem, also sang the title song for the televising of Srilal Shukla's political satire, Raag Darbari.

Darbaaris are generally well taken care of. The rest of humankind will get by on messy, real music. Moments of bathos--I have seen Bismillah doing Goonj Uthi Shehnai for an audience of police top brass, sipping their whisky with napkins wrapped around the glass as the maestro played requests; a friend claims to have seen Kishori come on dais one merry evening and plonk down, back to the audience. And occasional epiphany--chancing across a late-night bhajan mandali in a small village temple in Goa, people who looked like they drove trucks in the morning, singing piece after piece in perfect raag; an extended session by desert troubadours on the sidelines of a kitschy mela; a Texan elder with a Chinese musette throwing respectable Delhiites into a deep funk. And yes, the glory of Bhimsen Joshi al-fresco in the rain, summer of 2000, Nehru Park. That pure dawn, young colts and silver-haired women standing around in wonderment on the grassy knolls, getting all wet and raptured, a mountain of a man boxed into a wheelchair, but still the very picture of leonine dignity against that huge tree, the ficus religiosa, an image at which sarcasm finally deserts me…