Mohiniyattam exponent Bharati Shivaji turns 70. Hers is a fascinating cross-culture story, which is also the core of Hindustani violinist Kala Ramnath whose birthday, too, falls today: 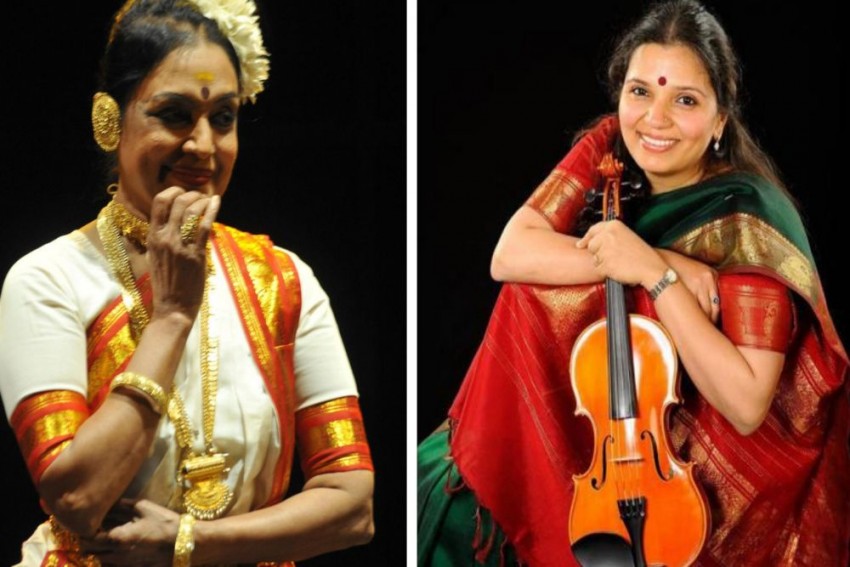 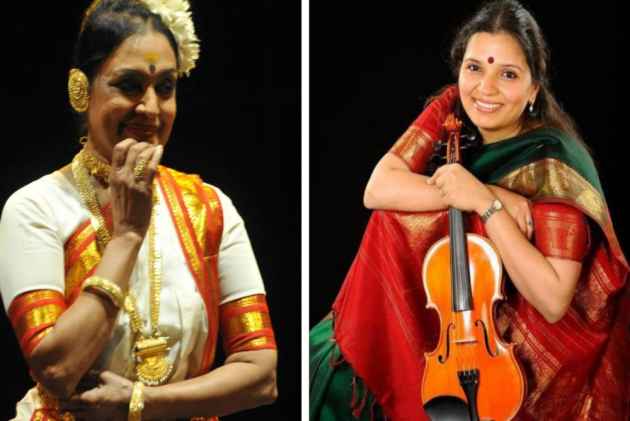 In her younger days as a researcher danseuse, Bharati Shivaji travelled to Kerala to learn more about the state’s classical dance of Mohiniyattam so as to spread its aesthetics to the rest of the world. That was in the mid-1970s, when a government scholarship enabled her to receive guidance from scholar-playwright Kavalam Narayana Panicker.

Bharati’s advanced studies led her to train also under Kalamandalam Kalyanikutty Amma, the doyenne of the contemporary version of Mohiniyattam, at the veteran’s residence in Tripunithura. That heritage pocket, just south of Kochi, is also to where instrumentalist Kala Ramnath traces her familial moorings. The famed Hindustani violinist and the frontline classical danseuse celebrate their birthday today.

Kumbakonam-born Bharati, who is based in Delhi, turns 70, while Mumbaikar Kala Ramnath, 19 years younger, too, has her household originally belonging to Tamil Nadu from where her forefathers migrated to the other side of the Western Ghats. Together, the two exponents spin yet another tale of how cross-culture endeavours have embellished India’s classical performing arts in the present times (as it has always been).

The temple town where Bharati was born bears the Cauvery-belt ethos of Thanjavur, known for its enrichment of the subcontinent’s Dravidian culture—primarily in the fields of music (Carnatic), dance (Bharatanatyam) and architecture (Chola-era temples). That being the case, in hindsight, it’s no small wonder that a person from that region ended up specialising in an art spread down the Malabar Coast, where Mohiniyattam was itself struggling to come back from a near-death it faced in the early first half of the 20th century owing to a social degeneration augmented also by the ruling British who were largely un-patronising to the Indian arts.

Bharati was 10 years old when she stumbled upon the Kerala dance at a pan-India symposium the Sangeet Natak Akademi held in the national capital in 1958. Aspiring to be a danseuse in Bharatanatyam and Odissi—two forms in which she was being trained then—a Mohiniyattam recital at the event by Indrani Rehman bowled Bharati over. She soon found a Delhiite guru, and that was how Radha Marar began teaching her the Kerala dance.

That chapter only added to the young danseuse’s appetite to further explore the beauty of Mohiniyattam, triggering her trip down the Vindhyas to God’s Own Country. Today, the dance form has even a Bharati Sivaji style among its handful of nuanced variations starting from the times of Kalyanikutty Amma (1915-99), who was among the first batch of Mohiniyattam students in the 1930-instituted Kalamandalam where the form was resurrected.

Kalamandalam, which went on to become Kerala’s premier performing-arts institution (as a deemed university of late today), is a 100 km north of Tripunithura, where Kalyanikutty Amma happened to eventually settle (along with her Kathakali icon husband Kalamandalam Krishnan Nair). It’s a town that had been the capital of the Kochi kingdom—and is a nerve-centre of a whole range of arts (owing to royal patronage).

It is there that a family of yester-century immigrants got a new member in 1928; his name T.N. Krishnan. It’s a name almost synonymous with Carnatic violin of the present times when TNK, as the retired professor from Delhi University is fondly known, is poised to touch 90 this October. Krishnan has a sister, also violin-playing—in the Hindustani style—called N. Rajam, soon to become an octogenarian, having had a teaching association with Benares Hindu University, her alma mater too. The two artiste siblings got a nephew in 1967 from their brother T.N. Mani living in Madras, where he had been associated with the music circles of Tamil film industry.

The girl, Kala, was only two-and-a-half years old when her grandfather, A. Narayana Iyer, began giving the child primary lessons on the violin in Carnatic style. Into her early teens, Kala gave her debut public concert in classical music, where she branched out to specialise in Hindustani. Her full bloom happened under the tutelage of Mewati gharana maestro Pt Jasraj, now 88.

Thoroughly close to both the two classical music streams of her country, Kala is also known for her artistic collaborations with instrumentalists from abroad. She is adept in blending into her bowing certain techniques and aesthetics of Western classical besides sharing stage with masters of Jazz, Flamenco and African music.

Such traits run much in parallel to Bharati, known for her associations with allied Kerala art-forms and even unrelated ones—like a Mohiniyattam adaptation of the 19th-century ballet by Russian composer Pyotr Ilyich Tchaikovsky. Closer home, she has done productions (some of them along with daughter Vijayalakshmi) inspired by classics such as Bhanusimher Padabali (Rabindranath Tagore), Chandrotsavam (Manipravalam) and Somastuti from the Rig Veda besides the Devagita from Jayadeva’s Ashtapadi. Equally, Bharati pooled in movements, postures and even music from traditional Kerala art-forms like Krishnanattam, Ottanthullal and Kaikottikkali alongside the chenda drum concert called thayambaka.

It’s no surprise, overall, that a mix of cultures is only gaining momentum in modern India.