Bhajji, Irfan Give Lessons To Seniors

The result was never in doubt after the Indian top order's tame capitulation for the second time at the Chinnaswamy Stadium, but what the Aussies had not reckoned for was the dogged resistance from Harbhajan Singh (42) and Irfan Pathan (55). The duo' 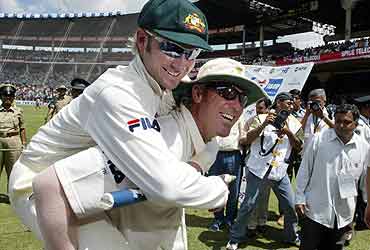 Australia were made to sweat a little bit by the defiant Indian tailenders before wrapping up the first Test with a resounding 217-run victory and take a 1-0 lead in the four-match series today.

Needing just four wickets on the final day's play, the visitors were made to wait for nearly three hours before breaking the dogged late order resistance to dismiss India for 239 and inflict one of the heaviest Test defeats on the hosts in their own backyard.

The Indians were thoroughly outplayed in all departments of the game from the very first day and overhauling a record target of 457 on a wearing track at the M Chinnaswamy Stadium was well beyond the reach of a batting line up which has been miserably out of form.

Resuming at the overnight score of 105 for six, the Indian tailenders Irfan Pathan (55) and Harbhajan Singh (42) managed to delay the inevitable by batting with a determination not shown by their famed top order batsmen.

The young Pathan cracked his maiden Test half century and got able support from Harbhajan to not only frustrate the visitors but also ensure that India's margin of defeat was less than 329 runs -- their biggest defeat by runs so far which had come against South Africa at the Eden Gardens in 1996-97.

Pathan and Harbhajan added 89 runs for the ninth wicket that lifted them from 125 for eight to 214.

Pathan repeatedly stepped out to Shane Warne and smacked him to the on side boundary, twice the ball sailed over the ropes.

Harbhajan at the other end showed guts to take on the pacers, and was careful to avoid the fate of being foxed by a slower one by Glenn McGrath. He also clouted Warne for a huge six over mid-wicket.

In the process, the Aussie leg spinner was denied from equalling Mutthiah Muralitharan's world record of 532 Test scalps.

He will now have to wait another three days to achieve the feat in the second Test that starts in Chennai on Thursday.

Adam Gilchrist, after allowing Warne an extended spell, had to finally take the second new ball.

Jason Gillespie, who was suffering from a side strain, struck almost immediately when he had Pathan caught behind.

The 20-year old faced 141 balls and struck eight fours and two sixes, showing that he has the potential to become an all-rounder.

Harbhajan then lifted McGrath over the head to the long off boundary before Gillespie forced a miscued pull for a catch at fine leg.

It remains to be seen how much the exploits of Pathan and Harbhajan help the team's morale.

Placards in the galleries read "India discovered new openers" when the duo were on song. It was more an indignation of India's top order failure than a praise for the tailenders.

India lost vice-captain Rahul Dravid after a watchful 60 in the 16th over of the day and the end seemed near when Anil Kumble dragged one on to his stumps.

The scoreboard read 125 for eight at that stage and the target of 457 a monumental 332 runs away. But Pathan and Harbhajan put the Aussie bowling to the sword with some belligerent shots.

Pathan was dropped on seven by Michael Clarke, who was declared the man-of-the-match, in the morning session, a lapse which made the Australians spend a lot more time on the field.

It was a far cry when Dravid and Pathan began the day with the chance of saving the match remote. Dravid's vigil ended when Michael Kasprowicz's reverse swing found him plumb in front of the wicket.

Kasprowicz then had another success in the next over when Kumble played on to his stumps.