The exit of Aravinda 'Mad Max' De Silva is a major event in the history of one day cricket and should have been observed at least by all the commentators. 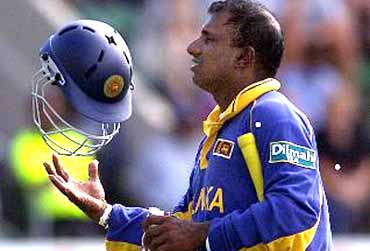 Old Trafford, June 17, 2002. After making 40 runs in typical but undemonstrative fashion, Aravinda raised his bat to the acknowledging cheers of the Manchester crowd which knew fully well that they will not see this peerless batsman play another Test match in England again.

Sadly, the departure of the same batsman after being run out (more due to old age than due to poor judgement) at the World Cup Semi Final, did not see the same warmth from the crowd which was perhaps preoccupied with other concerns. The exit of De Silva is a major event in the history of one day cricket and should have been observed at least by all the commentators.

Short, stocky and never lean even in his heyday, he seemed to undergo a magical transformation the moment the ball was delivered and his feet got into position. At that moment he seemed to justify the reason why cricket bats were created and why cricket balls are bowled (sometimes chucked) at them.

There are plenty of batsmen from all corners of the world who have impressed with their achievements in the shorter and longer versions of the game in the modern era. Some have brutally bludgeoned bowlers into submission through raw power. Some have worn them out through attrition. Some have done both. But only a very carefully picked handful could match the sheer visual spectacle that Aravinda De Silva makes with his strokeplay.

Brian Lara, with his bent back and high back lift and instinctive aggression comes to mind. David Gower, with his trademark "lazy" elegance also flashes briefly. But no other right hander comes even close. Mmmm…maybe Mark Waugh. Maybe not. Bullies or grafters or unorthodox types need not apply. Elegance, fluidity, silken grace and other synonyms form the criteria.

He seemed to do his thing irrespective of the situation or whether it was a ODI or Test. Known as Mad Max by his mates for his youthful aggression during his early days, he settled down later into the gentlemanly persona that typifies his glory days. There aren't very many who could have taken the fight back to the Indian camp after they struck deathly blows by removing Jayasuriya and Kaluwitharana in the early overs of the game during the '96 World Cup Semi Final at the Eden Gardens.

The calm and unruffled manner in which he played shots of stunning beauty to shut the doors on any Indian hopes of a collapse still lingers in memory. Even though Kumble eventually got him with a beauty for 66, the damage was already done. But there was still work to do and he carried on in the Final with relatively less magic but with more determination. Another batsman had wreaked similar havoc on Indian hearts at the same venue a few years before. This was Salim Malik with his magical 72 against Kapil Dev and co. That was a miraculous innings alright but it would not match De Silva's in a beauty contest.

Had Pinnaduwage Aravinda de Silva been an Indian cricketer, he would have been elevated to divine status many times and then demoted to bovine status a few times in between. Being Sri Lankan, he has been spared this special treatment and allowed to go about his business of simply being a superb cricketer who played a huge role in the maturing of a minnow of yesteryears into a formidable world-beating unit.

Timing one's exit to a nicety is also a rare gift. Only a handful have managed to execute this with the same dexterity with which they played the game, Gavaskar being a prime example. Aravinda can be equally satisfied with his own timing. While he did not outdo his own past achievements in this World cup, he left connoisseurs of the game with brief glimpses of his greatness to keep wanting more. Be they during longer essays (against SA and Australia) or during shorter ones ended cruelly by run outs brought about by aging legs (against WI and Australia) his presence always brought out the adjectives and sighs.

It was more than a decade ago, when I first encountered his batsmanship during a ODI against Pakistan that I happened to watch live from the lawns of Centurion. He played a stroke filled 93 for a losing cause against Waqar, Aaquib and Ata-ur Rehman. Since then I've never let slip an opportunity to enjoy the batting of one of the greatest the game has ever known.

The author likes James Joyce, Ludwig von Beethoven, The Coen Brothers, The Grateful Dead and Aravinda de Silva, not necessarily in that order.

"We Are Not Here To Watch Cricket"