A sectarian contest within the Muslim community --a quest to establish Barelwi supremacy over the Deobandis -- escalates and ignites the simmering animosity between Hindus and Muslims in the sleepy, small city in UP 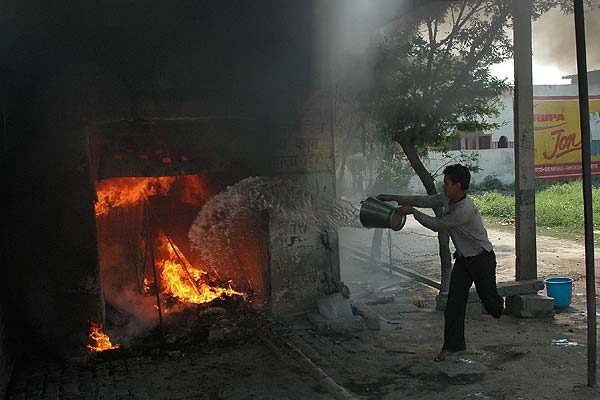 It is now two weeks since parts of Bareilly was placed under curfew. The trouble that started when a Juloos-e-Muhammadi procession (a procession taken out to mark the birthday of Prophet Muhammad) insisted on marching through a communally sensitive locality escalated and seems to have ignited the simmering animosity between Hindus and Muslims in this sleepy, small city in Uttar Pradesh.

Bareilly has nearly 34% Muslims but, within the city, the proportion is much higher. Within Muslims, it is the Barelwis who are, and have traditionally been, the numerical majority. Deobandis and other reformist traditions within Indian Islam are a minority here although their numbers are growing. Bareilly also has its history of shared spaces -- the land for one of its famous temple was donated by a Muslim; and both Hindus and Muslims are fond of their composite tradition of kite flying.

Perhaps the matter would not have escalated to the extent that it did, had the police been perceived as being even handed. First they arrested Maulana Tauqeer Raza Khan, one of the most important Maulanas of the Barelwis in India. Resident in Bareilly, Tauqeer Raza Khan is a direct descendant of Ahmad Riza Khan, who is revered by the Barelwis throughout the subcontinent. Some Muslims claimed this proved the partiality of the police as they did not arrest any other ‘prominent’ person from the Hindu community.

May be the importance of Tauqeer Raza dawned upon the police much later -- or the political pressure from above saw to it that he was freed. But the damage had been done by then.

So now we have a case that while earlier, the Muslims were protesting against the arrest of the Maulana, now it is the Hindus who are protesting against his release. It needs to be said that Bareilly has been a traditional seat for the BJP. It was only in the last elections that the Congress won from there. The release of Tauqeer Raza also saw the release of pent up feelings of the Muslims; and similar mobilization from Hindu organizations. The VHP and Bajrang Dal have deep roots in the city and their role in fomenting trouble cannot be discounted.

The problem got murkier because parties as varied as the Congress, the BSP and the SP want to court Tauqeer Raza. The result is going to be polarization between the two communities, and the net gainer, amidst all this, would be Tauqeer Raza himself.

It is important to know some things about him. Some years ago, he came out of the All India Muslim Personal Law Board and formed a new board, styled as AIMPLB - Jadeed (or modern) under his leadership. Of course,  there was hardly anything modern about this Board; it was as retrograde as the AIMPLB. The Maulana also runs an organization called Ittehad-e-Millat (Council of Muslim Unity), although given half a chance; he would pronounce those not following his interpretation of Islam as being not Muslim enough. Thus Deobandis and the Ahle Hadis are not Muslim enough and it is not permissible for Muslims to pray behind imams (prayer leaders) of such denominations. Can there be a better way to create Muslim unity? The Maulana is also infamous for offering a Rs five lakh reward to anyone who killed Taslima Nasreen, allegedly for giving a bad name to Islam.

And yet, at the same time, Tauqeer Raza and his group, the Barelwis, are a besieged lot. Some months ago, in a meeting of prominent Barelwis, Tauqeer Raza gave a call to all Barelwi Muslims to ‘liberate’ their mosques and madrasas from the clutches of the Deobandis. It is a fact of Indian Muslims, that while the Deobandis are the numerical minority, they enjoy disproportionate power.  Prominent Muslim bodies such as the AIMPLB are dominated by the Deobandis and various governments have courted them with an eye on the Muslim vote. Locally, the Deobandis are much better organized and through their network or madrasas and movements such as the Tabligh Jamaat, they are winning over considerable sections of the Barelwis Muslims.

Over the years, the Barelwis have been organizing themselves to ‘defend’ the Muslims from the ‘evil’ influences of the Deobandis. Thus Tauqeer Raza’s insistence on a particular route for the Juloos-e-Muhhamadi should be understood as coming from a position of embittered marginality. The positioning of Tauqeer Raza thus should not be seen only in relation to the Hindu Right but, more importantly, perhaps as an expression of sectarian contest within the Muslim community itself.

It needs to be understood that the Deobandis have traditionally been opposed to the Juloos-e-Muhammadi, terming it as religious innovation. Thus the procession was not a Muslim procession; rather it would be better to understand it as an all Barelwi affair. Such processions usually become a show of strength for communities and in Bareilly the Juloos was an expression of the power of the Barelwi leadership aimed at the emerging threat of the Deobandis. However, in being transformed into a Hindu-Muslim conflict, Tauqeer Raza can now claim to be the custodian of all Muslims, something which he had wanted to be for a long time.

The price for such a religio-political ambition has been paid this time by the ordinary Muslims and Hindus of Bareilly. Doesn’t it sound familiar?

Arshad Alam is with the Centre for Jawaharlal Nehru Studies, Jamia Millia Islamia