Governance has been abandoned to mob intimidation at the price of free speech. The law — even in its width — was intended to outlaw malicious speech, which intended disruption. Today the disrupters claim a sensitivity that they do not possess and a p 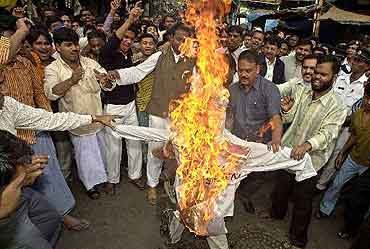 In the last decade or so, new emerging patterns of social censorship seem to have eclipsed the framework of legal censorship that has been bequeathed to India by the British. Apart from innumerable local statutes, legal censorship is imposed by

(a) prosecution,
(b) banning by the State Government with an appeal to the High Court,
(c) customs law preventing import and export of a book,
(d) a civil suit for defamation, invasion of privacy and the like or
(e) through the film Censor Board.

Thus, D.H. Lawrence's Lady Chatterley's Lover was successfully prosecuted all the way to the Supreme Court in 1965. The latest state bans include those on Taslima Nasreen's Dwikhondito by West Bengal in November 2003 and James Laine's Shivaji: Hindu King in Islamic India by the Maharashtra Government earlier this month. A customs ban was imposed on Salman Rushdie's Satanic Verses in 1988.

Likewise, Khushwant Singh's autobiography, Truth, Lies and a Little Malice, was injuncted by the Delhi High Court in a suit filed by Maneka Gandhi. The Bandit Queen case decided by the Supreme Court was about cinema censorship. Even though we cannot be complacent about court bans, which are increasing to silence the private, public and activist voices as with S. Kumar's suit against activists of the Narmada Bachao Andolan in 2001-03, a new combination of state and social censorship plagues India.

If the government bans a book and writing, it should take a firm and an independent decision based on limited public interest grounds. When the Hone Anhone, Tamas, Ore Oru Gramathile and Bhopal [gas tragedy] documentary cases came before the Supreme Court (1987-1992), the Court upheld the preferred status of free speech. Today, State Governments no longer seek to defend the constitutional right to free speech — including the right of every individual to decide what he/she wishes to read or see. They simply ban books and films totally abdicating their discretion to mob pressure and for electoral gains.

Little would be left of a free speech-based secular democracy if this trend continues. No government seems to be immune to these pressures. On November 28, 2003, the Government of West Bengal proscribed Taslima Nasreen's book. Sunil Gangopadhyay's observation that the Bangladeshi version of the book was truncated and abridged compared to the Indian is hardly an argument; it is, in fact, a tribute to Indian democracy. Anyone having a personal grievance with the book can file a defamation suit. It was done by Syed Shamshul Haq in Dhaka and Syed Hashmat Jalal in Kolkata.

In fact, on November 18, 2003, the Calcutta High Court injuncted the book. Even though the book was banned by the Calcutta High Court on defamatory grounds, the West Bengal Government banned it 10 days later. For doing this, there have to be good public interest reasons — such as whether the work causes enmity between groups or has the deliberate and malicious intent to outrage the religious feelings of a community as defined in the Indian Penal Code. Little of this sort really existed in Ms. Nasreen's book other than the fact that the Ulema Council and others wanted to spite the book and its author. Shockingly, a patently illegal public offer of Rs.20,000 was made to anyone who would blacken Ms. Nasreen's face or garland her with used shoes. Social pressure and vote-bank politics triumphed over good governance.

Anything West Bengal does, Maharashtra tries to do better. In June 2003, the Oxford University Press published James Laine's book on Shivaji. Some historians protested on November 10, which led to an apology and withdrawal of the book by the OUP on November 21, 2003. Once the book was withdrawn, surely the controversy was dead. However, on December 10, Shiv Sena workers sought an explanation from Shrikant Banulkar, a researcher at the famous Bhandarkar Institute of Oriental Studies, Pune, whose name figured in Mr. Laine's list of acknowledgements.

The controversy moved from banning books to intimidating authors. In protest, Dr. Mahendale, who had asked for a ban on the book earlier, destroyed his own manuscript on Shivaji. On December 28, Raj Thackeray apologised to Dr. Banulkar. This should have ended the controversy. But it did not. On January 5, 2004, the Bhandarkar Institute itself was ransacked by members of the Sambhaji Brigade. Thousands of priceless manuscripts were destroyed. After this, on January 13, the Maharashtra Government banned the book. Why? To appease criminals and those behind them? Now it wants to arrest the publisher and the author.

The banning of the book on Shivaji demonstrates exactly how lumpen fundamentalism dominates our censorship today. Even after a book has been withdrawn, threats and violence continue to result in the destruction of the very books that form part of Maharashtra's heritage, which the elements claim to protect. The attitude of the Maharashtra Government displayed no application of mind. A book withdrawn from circulation was banned by playing into the hands of lumpen elements for sectarian votes and an unedifying notoriety for defending a supposed heritage at the instance of those bent on destroying it.

The core of the emergence of the new form of social censorship has only one watchword: "You cannot read what we do not like even if we have not read it". To this is added the xenophobic threat that if people help collaborate or help those (especially outsiders) who write on certain subjects, all hell will break loose with disproportionate ferocity. Mr. Laine's explanation that he merely reflectively summarised what Indian historians had said seems more than plausible. But no one was interested in the merits of the controversy.

This new social censorship has become the order of the day. It was at the instance of angry Muslim elements that the Satanic Verses was subject to a customs ban. Miscreants sought to destroy Sahmat's exhibition on Ayodhya, which displayed one panel on the various versions of the Ramayana. At the instance of L.K. Advani and other BJP leaders (the party was in the Opposition in Parliament and in power in Delhi), the panel was banned by the Delhi Government in 1993 till the Delhi High Court liberated it years later. In December 1998, mischievous elements and other groups demonstrated against Deepa Mehta's film, Fire. In 2000, similar elements refused to permit the filming of Ms. Mehta's Water in Varanasi. In 1998, huge protests prevented the Pakistani gazal vocalist, Ghulam Ali, from performing in Mumbai. In 1996, M.F. Husain's paintings were destroyed by mobs — a travesty repeated in April-May 2002. In 2003, there was a little hiccup on whether Laloo Prasad Yadav would allow the exhibition of Prakash Jha's Gangajal in Bihar — to which Mr. Yadav agreed. No doubt, political riots would have broken out if such approval had not been given.

All this is not about just public pressure to ban books or street pressure reaching a pitch that the government is scared into retreat. Some of these incidents show the pervasiveness of a new and terrifying social censorship. Mani Ratnam accepted some cuts in the film, Bombay, from the Shiv Sena leader, Bal Thackeray. Apart from the incidents concerning M.F. Husain, other examples are no less menacing. In March 1998 and again 1999, the Bajrang Dal disrupted a beauty pageant in Gujarat. In the same year, copies of the Bible were burnt in Rajkot. There is also a kind of informal pre-censorship. Michael Jackson met Mr. Thackeray and donated the proceeds of his performance to a local charity before performing in Mumbai. He was allowed to perform. But the Australian group, Savage Garden, had to submit its lyrics and perform in a particular way with the eventual threat that transgressors would be dealt with `underground'. Matters have gone worse. Despite investigations, there is still a question mark on the disappearance and death of the political cartoonist, Irfan Hussain, who published cartoons on anti-Christian violence. In Assam ULFA wanted bans on all kinds of films to which the State Government agreed to a limited extent.

Where does all this take us? The old inherited British model of public pressure and limited selective bans have gone. Today's new intimidating social censorship knows no limits. Direct threats are handed out by lumpen elements. Powerful informal censorship systems have crippled performance, films, shows and publications. Faced with this barrage, state censorship has retreated or capitulated. Governance has been abandoned to mob intimidation at the price of free speech. The law — even in its width — was intended to outlaw malicious speech, which intended disruption. Today the disrupters claim a sensitivity that they do not possess and a power they should not have. Social censorship in India is a fatal cancer, which is destroying both India and its governance. It has degenerated into hoodlum and goonda rule. Is this the `feel-good factor' we are looking for?

Rajeev Dhavan, Senior Advocate in the Supreme Court, is a well-known commentator on legal issues. This article appears here courtesy, The Hindu