Discovering the Delhi chapter of the Dead Persian Poets Society: outside India, in Dushanbe, during the US bombing of Afghanistan... 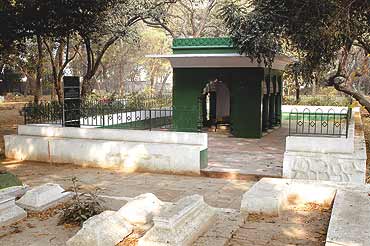 For the follow-ups to this article, please follow this blog link

Would the honourable judges of the Supreme and High Courts know that a stone’s throw from their Lordship’s chambers is the grave of one of the greatest poets this country ever produced?

(It is one hell of an uphill task: trying to compose poetry in Bedil’s style.)

If you are walking from the Supreme Court, on the pavement opposite Pragati Maidan, past the Sports Club of India, you cannot miss the enclosed area, carpeted with grass, leading to Bedil’s tomb.

It is ironical that I should expect the honourable judges and lawyers in the vicinity of the tomb to be familiar with Bedil when even committed Urdu poetrywalas know him only cursorily.

I myself learnt of Bedil outside India. During the US bombing of Afghanistan, many journalists, including yours truly, travelled to the areas under the control of the Northern alliance (which was helping the West in ousting the Taleban) via Tajikistan, where Ahmad Shah Masood, the great Afghan patriot, found frequent sanctuary.

In Dushanbe I located people who told me about Masood’s love for Bedil’s poetry. Since the spoken language in Tajikistan is Persian (it is called Tajik in Tajikistan and Darri in Afghanistan), I mentioned a few Persian poets I thought would be high in their esteem. Not only did they not know much about Ghalib’s Persian poetry, they did not seem to place great store by the poets of Shiraz in Iran, like Hafiz or Saadi.

This was astonishing, because Hafiz was something of an icon for ‘cultured’ Indians in the first half of the 20th century. Rabindranath Tagore made a special pilgrimage to Hafiz’s tomb in Shiraz. His photograph at the tomb, reading Hafiz, adorns the wall of the library attached to the tomb. Tagore, like Raja Ram Mohan Roy (he edited a newspaper in Persian) considered Iran to be the repository of Persian culture.

I conducted my own opinion poll in Dushanbe: who is the greatest poet Tajiks know? There is absolute unanimity in Tajikistan and Afghanistan that there has been no greater poet than Bedil.

For Indians unfamiliar with Urdu or Persian literature Bedil presents a bit of a paradox: he was born in Patna (died in Delhi) but he is among the world’s greatest Persian poets, and the most loved poet of Afghanistan and Tajikistan—but unknown in India.

Mirza Abdul Qadir Bedil was born in what is Today’s Bihar. At the age of nine he demonstrated his talents by writing a quatrain on a classmate.

He witnessed the last phase of Shahjehan’s reign, recorded significant details of Aurangzeb’s religiosity. As a concession to the rising power of the clergy, Aurangzeb encouraged long beards as a symbol of faith. Bedil retaliated that an age of "goats and bears" had been inaugurated. He warned the Mullah that his long beard would block his entry into paradise where nothing that is aesthetically offensive would be tolerated.

All right, that’s four questions. The other evening I met Ahmad Faraz, possibly Urdu’s greatest living poet, and asked him another question: what did he think of Bedil? His answer: "Bedil is the greatest poet in Persian—which includes Iran!"

This article originally appeared in Delhi City Limits, March 2007. For the follow-ups to this article, please follow this blog link