Back To Square One

It was deja vu all over again as India was bowled out for 179 to lose the second cricket Test against South Africa by 174 runs and thus allowing SA to level the series 1-1. 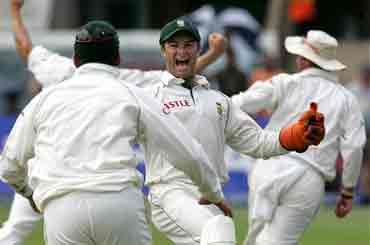 The euphoria of the historic win in Johannesburg gave way to utter despair as India surrendered meekly to give South Africa a series-levelling 174-run victory in the second cricket Test here today.

Set a stiff 354-run target, the fragile Indian batting line-up crumbled without much resistance to be dismissed for 179 in 55.1 overs, about 45 minutes after tea on the fifth and final day at the Kingsmead ground.

Makhaya Nitini (5-48) plotted the downfall of the visitors with a devastating exhibition of seam bowling which completely rattled the Indians who had just to bat out the day to save the game and retain their 1-0 advantage.

A delayed start and overcast conditions in the morning raised India's hopes of saving the Test, having been two wickets down overnight, but the sun filtered through the clouds to allow just enough overs for the home team to achieve their task.

The two teams would now travel to Cape Town for the series decider beginning on January 2.

Resuming at 38 for 2, India were rocked rightaway, losing both the overnight batsmen -- Sachin Tendulkar (0) and Wasim Jaffer (28) in quick succession to be reduced to 47 for 4, a position from where they could never recover although the tailenders did their best to thwart the hosts.

Both Tendulkar, who topscored in the first innings with 63, and Jaffer were dismissed by Ntini in the bowler's consecutive overs.

Tendulkar departed in Ntini's first over when he failed to bring his bat down in time and was beaten for pace by an incoming delivery. He failed to get off the mark and India were a wicket further down without any addition to the total.

Jaffer began in style from the other end, flicking a delivery from Shaun Pollock to square leg fence but in the bowler's next over was out playing a horrendous shot.

He tried to pull a short delivery from Ntini 0 -- declared man of the match -- from outside his off-stump and succeeded only in lobbing it up for Andre Nel at mid-on.

Jaffer, who like in the first innings promised much, made only 28 from 47 balls though there were four delightful fours studded in it.

India lost four wickets in all in the extended afternoon session starting with Sourav Ganguly's scalp who began aggressively and made 26 in quick time before guiding a lifting Makhaya Ntini delivery into gully, giving the South African paceman his fifth wicket of the innings.

VVS Laxman (15) followed him soon when he went back to Andre Nel and missed it completely to be out bowled for 15.

Anil Kumble defended stoutly for his 11 runs and batted for nearly an hour before the introduction of Andrew Hall ejected him from the middle.

Hall sent down an awkward bouncer at Kumble and the batsman could do no better than lob it for forward short leg fielder, Hashim Amla.

India then produced some rearguard action from its tailenders with Mahendra Singh Dhoni (47) doing his best to keep the hosts at bay.

The wicketkeeper-batsman put on 59 runs for the eighth wicket before being dismissed in the last over before tea break.

Dhoni, seeking to reach his half century, made an attempt to play a forcing stroke against Andre Nel and edged it behind, caught brilliantly by Mark Boucher.

Zaheer Khan (21) then showed admirable defence and tenacity in batting for over an hour but once Dhoni was out in the last over before tea break, the dye was cast in the favour of the hosts.

As clouds began to gather in the final session, India started using the option of consuming time. Both Zaheer and S Sreesanth (10) took a lot of time in taking guard and moving to their appointed places between the overs.

When Sreesanth was hit on his forearm by Ntini and the attendance from team's physio which took up a fair bit of time, it seemed to irritate the host skipper Graeme Smith no end.

Sreesanth even received a word from the two umpires in this regard.

But the hosts were not be stopped as Zaheer edged a catch i nto the slip cordon off Nel, bringing an end to his 56-ball vigil at the wicket.

Sreesanth (10) was a trifle unlucky to be adjudged caught behind with replays suggesting the ball had hit his shoulder and not the bat.

The South African victory was all the more creditable since they were without their talismanic all-rounder Jacques Kallis who sat out of the match because of an injury.

At the end of the match, Rahul Dravid was found saying he would not hesitate to take tough decisions for the series-deciding third cricket Test in Cape Town. Dravid said that managing the resources would be a priority for the team in the next match starting January 2. "Any decision which is going to help the team would be taken irrespective of what the decision is," he said.

Brave words, these. Both the openers -- Wasim Jaffer and Virender Sehwag -- have been big failures in this series but it would call for a really strong decision to put Sehwag on the bench as he is still averaging over 50 in Test cricket and has been a regular in the side for the last six years. "Two of our priorities going into the final Test are to look at our top order batting and manage our resources," Dravid said

The Indian captain also hinted at a possible change in the bowling line-up, which could see the inclusion of seamer Munaf Patel in the final eleven for the third Test. "The three fast bowlers and a spinner have done a lot of hard work and we have to manage them well," Dravid said.

Dravid admitted that batting let the team down here as they conceded an 88-run first innings lead. The Indians also failed to bat out the final day to preserve their 1-0 series advantage. "We needed to bat 75 overs today and could not do it. It was disappointing. But having said so, they bowled in better conditions. It was overcast in both the innings when they bowled to us. We could have played better on the second day and third morning. Looking back, it was an advantage lost," Dravid admitted.

Looking at the positives from the game, Dravid said but for the final day, his side provided a tough challenge to the hosts. "It was not one-sided and we kept it close for most of the match except towards the end when they played better cricket and pushed ahead of us," he said. Dravid praised Mahendra Singh Dhoni for his resilience in the second innings even though the wicketkeeper played an indiscreet stroke to get out just before the tea break. "I think he had batted well till he made that mistake. He is showing a lot of improvement, he is learning and adapting his game. As time goes on, he will also get better at understanding the game. I can sense he is learning from mistakes and curbing his natural instincts," he said.

With the third and final Test a little more than 48 hours away, Dravid said it was a blessing in disguise as it would force his unit not to "brood over" the loss at Kingsmead.

The South African captain hailed bowling spearhead Ntini for rising to the occasion. "There were a few things Ntini was searching within himself at the Wanderers but it's a hallmark of a good cricketer that he comes good when the situation demands it."

Smith was happy his team "stayed away from all the rubbish going around" after the loss in the first Test. "We managed to stay away from a lot of rubbish which was going on and worked things privately which helped in turning things around in this Test," he said.

Smith said he wants to keep his feet on the ground and start afresh in the Cape Town Test starting January 2. "Usually we do well in back-to-back Tests so we are confident but we have to keep our feet on the ground, respect India and the conditions."