There have been numerous spy pictures floating around the internet which gives us a glimpse of what the entire CFMoto lineup looks like. The company’s initial plans include launching the 300NK alongside its mid-displacement 650NK and 650MT this May. Read all about it here. While the first two are sports naked bikes, the 650MT is an adventurer tourer which will take on the Versys 650, a bike that’s been fending off the competition with ease until now. Can the CFMoto 650MT put up a good fight and challenge the crown that currently belongs to the Versys 650? Let’s find out. 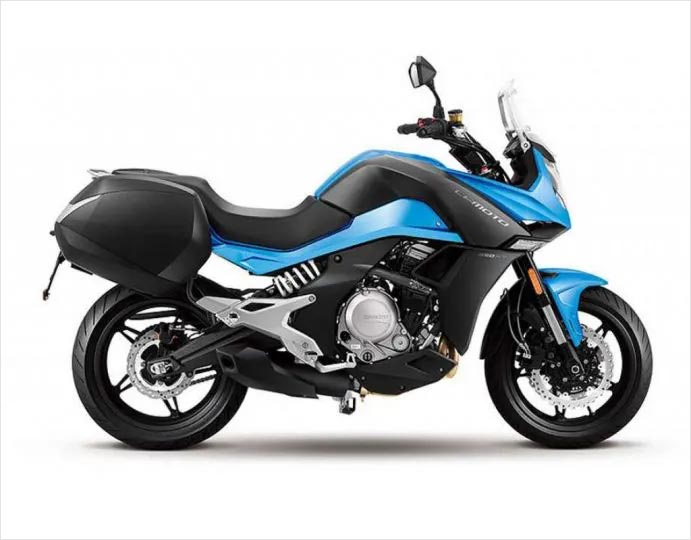 At a glance, the two engines may look similar and as a matter of fact, they are! You see, the CFMoto 650MT's engine is heavily inspired by the Kawasaki’s 650cc unit, so-much-so that the bore and stroke figures are the same. However, the 650MT puts out a wee bit more power higher up the rev range compared to the Versys 650. 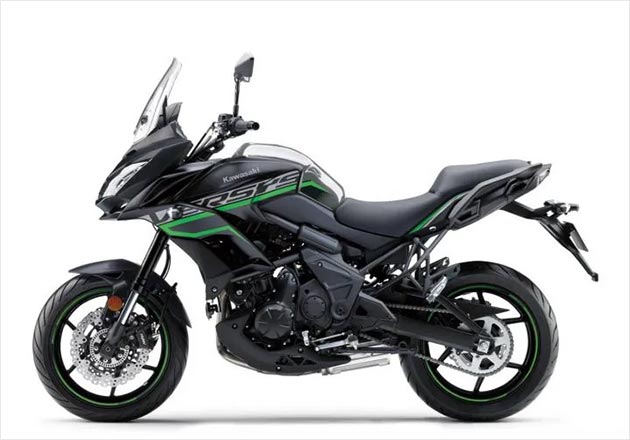 While we are yet to test out how the motor on the 650MT behaves, we do know a lot about the one on the Versys. Power delivery is linear and friendly. You have good drive lower down the rev range. Its peppy motor dishes out 2Nm of torque more than the 650MT. This could help the Versys cut down any disadvantage it has over the MT thanks to it being 3kg heavier. 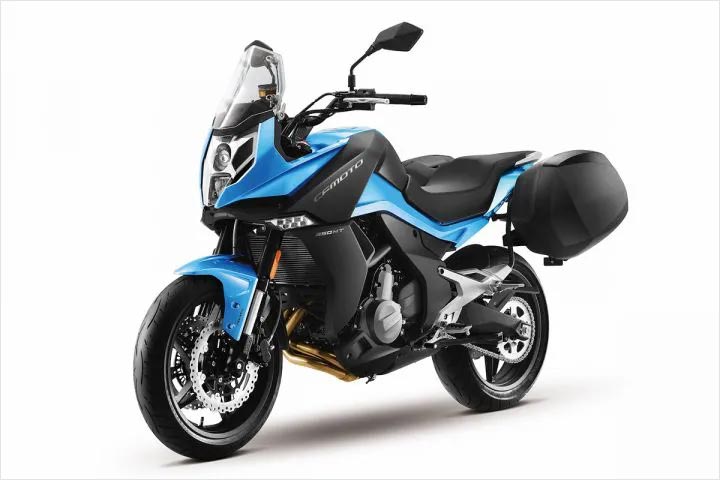 When compared through pictures, the 650MT looks visually bigger than the Versys 650. However, on paper, it's a totally different story. It is, in fact, the more compact motorcycle of the two. Both bikes share the same seat height and ground clearance, which could prove to be a hurdle for vertically challenged riders. You have to compliment the engineers at CFMoto who have managed to keep the 650MT lighter than the Versys despite the former having a larger fuel tank. 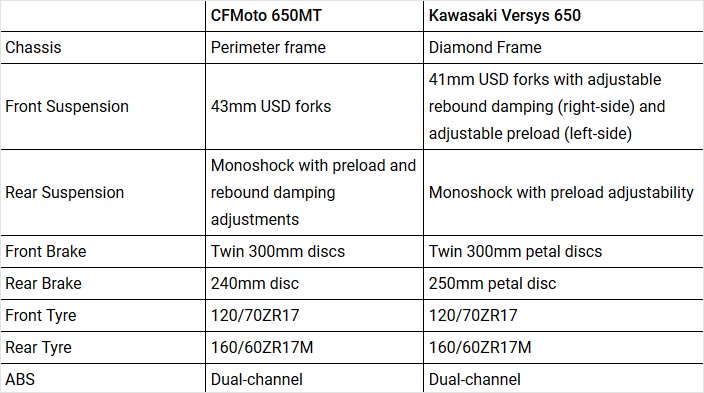 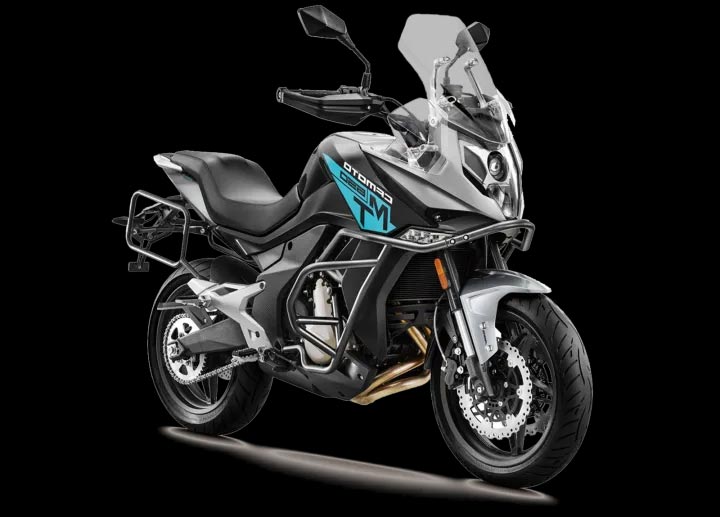 Both the bikes are similarly kitted out in terms of mechanicals. However, the Versys 650 has the upper hand thanks to its adjustable front suspension setup. In essence, riders can tweak the bike’s suspension according to the terrain or to suit their riding style, which is something the 650MT misses out on. 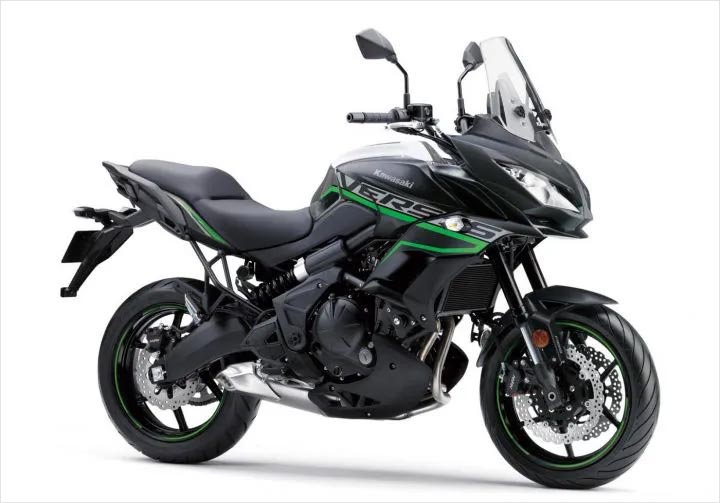 The braking setup on both bikes may look similar, but the Kawasaki gets petal discs which are better at heat dissipation and in turn should provide better feel and bite. Last but not the least, the tyres. The Kawasaki Versys 650 we tested came shod with road-biased Dunlops, which didn’t feel up to the mark. On the other hand, the CFMoto 650MT which was spotted testing was equipped with Metzelers that are known to be a lot more grippier on the road. So we could expect the latter to be a better handler compared to the Versys 650. That said, neither of the bikes are proper off-roaders. In fact, both are road-biased motorcycles with alloys wheels. So if we were you, we wouldn’t push these bikes off the beaten path.

If you’re looking for an off-road oriented adventure tourer, you could consider the Suzuki V-Strom 650XT. 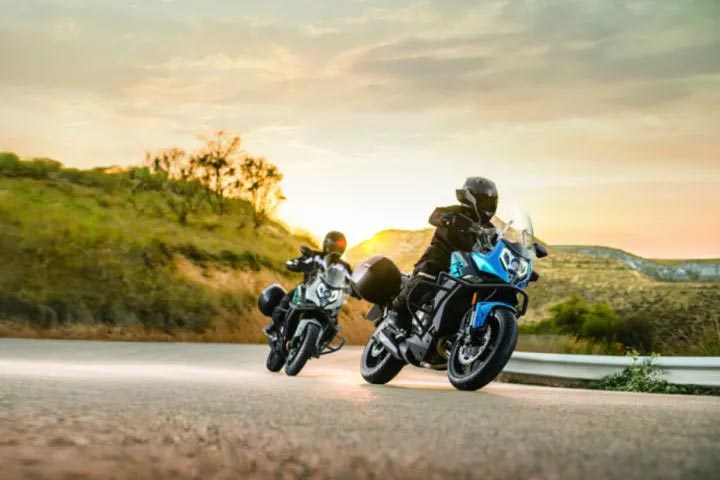 It’s no news that the Kawasaki Versys 650 is the benchmark in the mid-displacement adventure touring segment. And with the kind of equipment the bike offers, it makes for a pretty good value-for-money proposition. However, the 650MT isn’t far behind and is on par with its Japanese rival on most instances. If CFMoto manages to price the bike between Rs 6.2 lakh - Rs 6.5 lakh, it could give the Versys a run for its money.