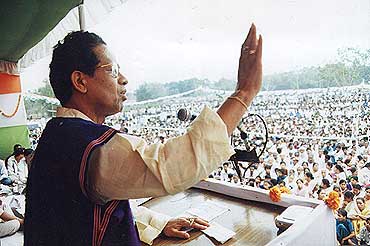 The 25 year old tradition has been maintained -- and the incumbent party has been defeated at the hustings.Congress is back to power defeating Asom Gana Parishad..

No party has been able to retain power in Assam since 1975. In fact, the state has seen power change hands between the Congress and the AGP every five years since 1985, when the AGP was born out of the six-year-long anti-foreigner movement in Assam.

Tarun Gogoi - Next CM?
Assam congress president Tarun Gogoi, tipped to be the new chief minister, today said the new government would be formed after the arrival of AICC general secretary Kamal Nath and his party's central observers tomorrow.

"Kamal Nath and the central observers would decide when we will form the government", Gogoi, who is tipped to be the new chief minister told reporters here at the congress headquarters.  He said the congress legislature party (CLP) meeting would be held here on may 16 to formally elect its leader. Asked what would be the size of the ministry, Gogoi said, "many considerations have to be made as there are so many different communities and ethnic groups in the state".

He said the mandate was  "vote for a better government and change from the misrule of the AGP-led government". "The people of Assam were for a long time looking for a change of government and they have full confidence in our party and leadership of Sonia Gandhi", a triumphant Gogoi, under whose stewardship congress won 71 seats to form the next goverment, told newspersons here.

He promised to provide a government, which, he said, would bring about economic development in the state, effectively tackle the unemployment situation and solve the insurgency issue both politically and economically. Assuring that the new government would be a "transparent and open" one, he said administrative reforms would be brought about.

Decentralisation of power, holding of panchayat polls at the year end, special policy for the youth, revamping of the education policy to give more emphasis on it and vocational training would be among the programmes of the new government.

"Kashmir Type Ceasefire"
Gogoi also said that a Kashmir-like ceasefire could be declared in Assam as a measure to solve the insurgency problem in the state. ``There is a possibility for a ceasefire as declared in Kashmir and Nagaland if the central government agreed to it."

The ongoing anti-insurgency unified command structure in the state would continue under the control of the present authority. Gogoi also appealed to the militants to come to the negotiation table to discuss their problems.``We want to have a political as well as economic solution to the insurgency problem'', he added.

Other AGP ministers who retained their respective seats:

AGP suffered its most humiliating defeat in the prestigious Dispur seat where chief minister Prafulla Kumar Mahanta was beaten by congress candidate Captain Robin Bordoloi and he finished a poor third behind arch rival Atul Bora. He however managed to win his home constituency Barhampur.

Smoother Than One Thought