The defending champions reached the target with 82 balls to spare. Skipper Rohit Sharma and Dinesh Karthik remained unbeaten on 83 and 0 respectively. 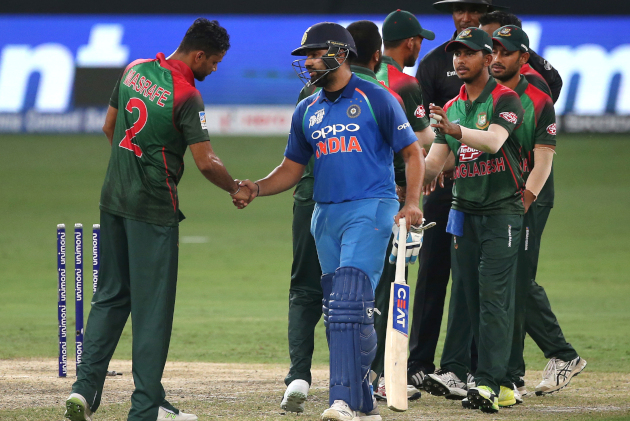 India chased down Bangladesh's 173 with relative ease to win the first Super Four match of 2018 Asia Cup at Dubai on Friday.

The defending champions reached the target in the 36.2 over with skipper Rohit Sharma and Dinesh Karthik remaining unbeaten on 83 and 0 respectively.

It was yet another all-round performance by the defending champions. After winning the toss, India opted to bowl first, they restricted Bangladesh under 200 then chased down the target with 82 balls still left in the match.

Against a disciplined Indian bowling attack, Bangladesh could manage only 173 in 49.1 overs.

Then openers Rohit and Shikhar Dhawan laid a solid foundation by scoring 61 runs in 14.2 overs before the latter was trapped in front of the wicket by Shakib Al Hasan.

Dhawan, who played the attacker's role in the partnership, scored 40 off 47 balls. The left-handed batsman is the leading scorer of the tournament with 213 runs. He had previously scored of 127 against Hong Kong, 46 against Pakistan.

Skipper Rohit and Ambati Rayudu then stitched a 45-run second wicket partnership as the Bangladeshis wait for the imminent defeat at the hands of the defending champions.

Rayudu departed in the 24th over after making 13 runs, caught behind off Rubel Hossain to bring Mahendra Singh Dhoni with India still needing 68 runs.

Dhoni's promotion at number seemed to have worked for both the player and team as the former skipper hit 33 from 37 balls. He departed with India still needing four runs, in the 36th over, bowled by Mashrafe Mortaza.

In the previous over, Rohit brought up his second fifty in two matches with six off the fourth ball, bowled by Shakib. He took 62 balls to reach 36th half-century.

Earlier, India won the toss and put Bangladesh in to bat. Ravindra Jadeja came in for injured Hardik Pandya, while Bangladesh made two chances by bringing in Mushfiqur Rahim and Mustafizur Rahman for Monimul Haque and Abu Haider.

India dominated from the outset with Bhuvneshwar removing Liton Das (7) in the 5th over. From 15/1, Bangladesh soon found themselves tottering at 101/7.

But a 66-run eighth-wicket stand between Mortaza (26) and Mehidy Hasan Miraz (42) helped Bangladesh move past 150-run mark for a fighting total.

Next, India play Pakistan at Dubai, while Bangladesh face Afghanistan at Abu Dhabi on Sunday.

Man of the match: Ravindra Jadeja