Another First For Sania 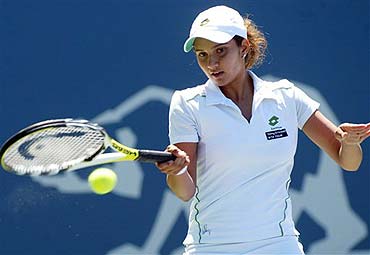 Sania Mirza added another milestone to her growing list of records by breaking into top-30 in world rankings today, thanks to her amazing run in recent weeks on the US hard courts.

The 20-year-old Indian made it to the quarterfinals at the $1.3-million Acura Classic in San Diego last week, which enabled her to move up one place to 30th on the latest WTA Tour ranking list.

The Hyderabadi girl lost in straight sets to eventual winner and world no. 2 Maria Sharapova, but the performance fetched her 110 points, which improved on her career-best ranking.

Also making a splash was Rohan Bopanna who became the first Indian male player since Leander Paes and Mahesh Bhupathi to break into the top-100 in doubles rankings.

Sania becomes the first Indian, man or woman, to be in the top-30 after Ramesh Krishnan who was ranked 23 in 1987.

Sania, whose career earnings now stand at $827,476, also retained her doubles ranking of 26 despite a first round loss at San Diego.

"It will be more of a personal achievement if I break into the top-30," Sania had said last week.

"As long as I keep improving and play good tennis, I feel that in the long run, the rankings will take care of themselves."

She was entered in the main draw of the $600,000 East West Bank Classic at Los Angeles this week, and faces a qualifier in the first round.