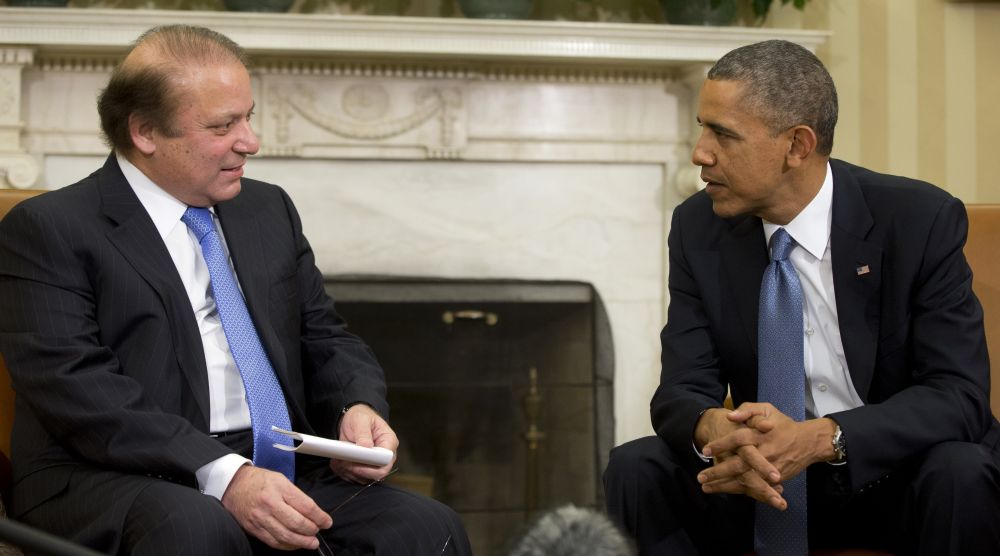 The United States and Pakistan are like an incompatible couple who can’t help bickering when together while well aware that divorce is not an option. The awkward joint appearance of US President Barrack Obama and Pakistani Prime Minister Nawaz Sharif for a press briefing after their White House meeting on 23 October, when they declined to take questions from reporters, aptly summed up the troubled relationship. This dysfunctional kinship, however, is moving towards a climax as the US withdraws forces and equipment from Afghanistan primarily through Pakistan

The bottom line is that the glue holding the two countries together consists of more negative than positive elements. Washington needs Islamabad in its ongoing war on Islamist terrorism – a desperate necessity at least until the withdrawal of its troops from Afghanistan. And cash-strapped Pakistan is humiliatingly dependent on handouts from Washington and US-sanctioned International Monetary Fund loans.

This dependency exists against the background of mutual Pakistan-American mistrust at the popular level.

A 2013 survey by the Pew Research Center shows that only 11 percent of Pakistanis have a favourable view of America. An earlier survey by the Pew Center and the Carnegie Endowment for International Peace revealed that only 10 percent of Americans have a great or fair amount of trust in Pakistan.  It also showed that 97 percent of Pakistanis familiar with US drone strikes held a negative view of them. “Those who are familiar with the drone campaign also overwhelmingly (94%) believe the attacks kill too many innocent people,” stated the report. “Nearly three-quarters (74%) say they are not necessary to defend Pakistan from extremist organizations.” In stark contrast, a survey by the Washington Post-ABC News in February 2012 found that 83 percent of Americans supported Washington’s drone attacks.

Reflecting popular opinion, Sharif, appearing next to Obama, said “The use of drones is not only a violation of our territorial integrity but they are also detrimental to our efforts to eliminate terrorism from our country.” His government was committed to bringing them to an end, he added.

Obama left Sharif’s words – delivered at the brief briefing in a tone so soft that reporters strained to hear him – stand alone, and refrained from making any related statement of his own. Strikingly, the word "drone" was missing in their 2,500-word joint statement. By contrast, the term “terrorism” appeared 13 times and “nuclear” 10 times – not in the context of parity with the US-India civil nuclear agreement that Sharif wanted, but in the context of “nuclear terrorism.”

Well practiced in the art of politically expedient leaks, the Obama administration disarmed Sharif’s protest on the drones – on which he had secured all party backing in Pakistan’s National Assembly – by briefing Greg Miller and Bob Woodward of the Washington Post.

On the day Sharif met Obama, the Post published their story. Citing hitherto classified documents of the US Central Intelligence Agency and Pakistan’s diplomatic memos, Miller and Woodward showed that, contrary to its vociferous denunciations of drone strikes for years, Pakistan’s government had clandestinely endorsed the campaign and received classified briefings on the attacks and casualty counts.

However, over the years the campaign has widened. Initially it was directed at “high value” Al Qaeda targets, and their number was limited. Between December 2007 and September 2008, during the presidency of George W. Bush, there were only 15 such attacks. In contrast, their number rocketed to 117 in 2010 under Obama, when Asaf Ali Zardari of the Pakistan People’s Party was his Pakistani counterpart. So far, according to Pakistan's Defense Ministry, since 2008 the United States has launched 317 drone strikes in Pakistan, resulting in 2,227 deaths, including 67 civilians.

These attacks are set to continue despite the fact that the 18 October report by Ben Emmerson, the UN special rapporteur on extrajudicial, summary or arbitrary executions, concluded that they violate international law. With that died any chance of a peace agreement between the Pakistani government and the Tehrik-e Taliban Pakistan – or TTP, the Movement of Taliban in Pakistan – an umbrella organization of militant Pakistani jihadist groups.

In mid-September, Sharif had secured all-party consensus in the National Assembly to negotiate peace with the TTP without conditions. TTP leaders then raised the stakes by insisting that the prime minister must first devise a policy that halts the US drone campaign against them in Pakistan’s tribal borderlands during the negotiations.

In the Pentagon’s drawdown plans in Afghanistan, to be completed by December 2014, Pakistan looms large. It is required to remove or transport at least 1.4 million pieces of equipment, ranging from small arms to massive wheeled and tracked vehicles. Pakistan provides the cheapest and quickest land routes for this purpose. On its part, Pakistan gains financially by charging transit fees while its private transport companies benefit from an estimated budget of up to $7 billion earmarked by the Pentagon for the pullout.

The Obama administration’s logistical dependence on Pakistan has led it to overlook its intelligence finding about Islamabad’s Inter-Services Intelligence Directorate’s ties with the Haqqani network, based in North Waziristan Tribal Agency, which has attacked Western and Indian targets in Afghanistan.

As yet, however, there is no sign that Mullah Muhammad Omar, the supreme leader of the Afghan Taliban, widely believed to be under surreptitious Pakistani protection, is ready to negotiate with the government of Afghan President Hamid Karzai whom he regularly denounces as an American puppet.

In his annual message for Eid al Fitr, the Festival of Breaking the Fast, in August, Omar was unmistakably hawkish. He called for continued struggle against US-led NATO troops and their Afghan allies, and urged Kabul's security forces to direct their guns at foreign solders, government officials, and Afghans cooperating with Pentagon-led troops. By contrast, Sharif and Obama in their joint communiqué welcomed Afghan-led preparations for April’s presidential elections.

Why do Sharif’s words echo Obama’s while his actions run counter to US interests? The answer lies in the dire state of Pakistan’s economy. Pakistan’s GDP expansion of 3 percent is barely keeping up with population growth. Its budget deficit at 9 percent of GDP is high whereas tax collection at 10 percent of the GDP is one of the lowest in the world.

Facing economic crisis, Sharif’s newly installed government applied for a massive loan to the IMF. Thanks to Washington’s backing, a $6.7 billion loan was approved in early September to be paid over three years – despite the fact that Islamabad already owes the IMF nearly $5 billion from credit received in 2007.

A few days after the Sharif-Obama meeting, the US agreed to release $322 million in Coalition Support Funds to Islamabad and announced plans to release nearly $1.6 billion to Pakistan in the current fiscal year.

While the patchwork of compromise keeps Pakistan afloat and US drones hovering over the tribal badlands along the Afghan-Pakistan border, a denouement is expected in 2014, starting with the Afghan presidential poll in April and ending with the US pullout deadline of December. The US-Pakistani marriage may become even more fractious next year, testing its very survival.

Dilip Hiro is the author of Jihad on Two Fronts: South Asia's Unfolding Drama published by HaperCollins India. His latest book is A Comprehensive Dictionary of the Middle East (Interlink Publishing Group, Northampton, Massachusetts, and London) Rights:Copyright © 2013 The Whitney and Betty MacMillan Center for International and Area Studies at Yale. Courtesy: YaleGlobal Online