Adityanath is the first BJP CM of UP to visit the monument of love. 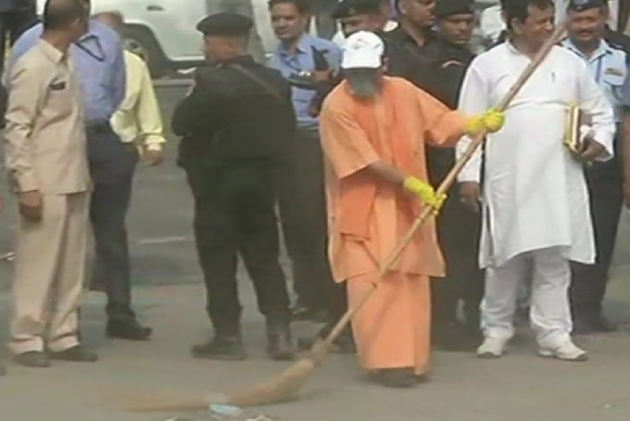 Donning a mask and wielding a broom, Uttar Pradesh chief minister Yogi Adityanath swept a parking area outside the Taj Mahal on Thursday, days after his BJP leaders and ministers made provocative statements against the 17th century monument.

Yogi accompanied by dozens of officials and police commandos wore yellow gloves, a white cap and an anti- pollution mask to sweep litter at the west gate of the Taj Mahal along with 500 BJP members.

Over 14,000 policemen have been deployed across the city for the security of Adityanath, who arrived in Agra early in the morning.

Adityanath will be the first BJP CM of UP to visit the monument of love.

The chief minister, who landed in the city’s Kheria Airport, went to Nangla Paima village and visited the rubber check dam. He also visited Kachhpura village.

A senior police officer told PTI that more than 14,000 policemen have been deployed across the city for the security of the CM.

“The monument is open for tourists and the entry will be allowed as per the routine process. The security has been stepped up,” he said.

According to his programme, Adityanath will stay for half an hour at the graves of Shah Jahan and Mumtaz Mahal and visit the Shah Jahan park nearby.

The chief minister will inspect various places along the way, inside and outside the monument.

He will also lay foundation for the development of a tourist pathway from the Taj Mahal to the Agra Fort.

The chief minister has already declared that the state government will spend Rs 370 crore on development plans aimed at promoting tourism in the city of Taj.

Along with the visit to the Taj Mahal, Adityanath will inaugurate various development projects in Agra, according to an official spokesman.

"During his tour of Agra.., the chief minister will be visiting all the places inside Taj Mahal," principal secretary, tourism, Awanish Awasthi said on Wednesday.

His decision to visit the Taj Mahal was announced after a series of controversies erupted, beginning with a UP tourism department booklet not mentioning the monument in its list of development projects in the state.

However, addressing a rally in Gorakhpur recently, Adityanath called Taj Mahal the "pride of India" and referred to it as a "world class monument".

This was a significant departure from his remarks at a rally in Bihar last year, when he had said that the Taj does not represent Indian culture and that visiting foreign dignitaries should be presented with the Gita rather than replicas of Taj Mahal.

The last time a UP CM visited the Taj was Akhilesh Yadav, more than two years back.

That was the Valentine's Day and Akhilesh sat on one of the benches in front of the monument along with his wife and Kannauj MP Dimple Yadav.