All You Need To Know About Justice C.S. Karnan, Who Now Faces Contempt Charge By Supreme Court

On January 23, 2017, Justice Karnan had published an open letter to the prime minister naming “an initial list” of 20 sitting and retired Supreme Court and High Court judges, accusing them of corruption 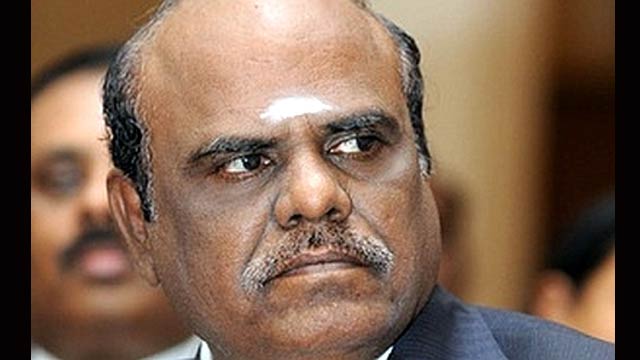 A seven-judge bench of the Supreme Court has directed Justice Karnan — presently with the Calcutta High Court — to appear before it on February 13, 2017 to speak out before the apex court initiates contempt charges. In a first where a judge has been served a show cause notice pending contempt charges, Justice Karnan has been pulled up for making comments against members of the judiciary.

The bench, led by Chief Justice of India (CJI), Justice JS Khehar, asked Justice Karnan to appear in person and answer the charges and have stripped him off his administrative and judicial powers till then.

In what also appears to be a first, Justice Karnan will appear in person to defend the contempt case after the Supreme Court allowed him to do so by a January 5 order.

The Attorney General of India Mukul Rohatgi argued on Wednesday that the judge should be made an example of to “protect the judiciary”.

Justice Ganguly had also said that he did have a soft corner for Justice Karnan and thought him to be a good man, though probably misguided.

Later, Justice Karnan has himself described the collegium system as ‘autocratic’.

In 2011, Justice Karnan had written to the National Commission for Scheduled Castes (NCSC) complaining of victimisation by the other judges because he was a Dalit.

He invited members of the press into his chambers and held a press conference there alleging victimisation at the hand of 4-5 of his brother judges.

The letter alleged that, at a wedding, a judge sitting next to Justice Karnan had crossed his legs to “deliberately touch mine”.

Several members of the judiciary found the letter to be in poor taste when the complaint became public. The NCSC had forwarded it to then CJI, late Justice SH Kapadia, since it was related to members of the senior judiciary.

In 2013, Justice Karnan had passed a much-criticised judgment which created a new law. Penal law allows a woman to approach a court when a man deserts a woman after pre-marital sex with a promise to marry her. Justice Karnan ruled that apart from the penal law, the woman could claim social status as his wife if the man were 21 and single and the woman 18 and single and that the premise of the pre-marital sex was marriage.

He later went on to explicitly prohibit criticism of this order through a gag order.

The Supreme Court described his behaviour uncharitable, ungenerous and indecorous because sitting judges don't appear or argue before another court, least of all, at another courtroom of the court where he himself sits. In fact, even after retirement or resignation, HC judges can only appear before other High Courts and the Supreme Courts. Most former HC judges only practice before the apex court.

Then chief justice of Madras HC, RK Agrawal, had asked then CJI, Justice P Sathasivam, to transfer Justice Karnan saying that other judges were afraid of him and that Justice Karnan had barged into his chamber “hurling a volley of invectives”.

Justice Karnan hit back with another complaint to the NCSC alleging caste-based discrimination. He also wrote to the CJI to stay the transfer request till he had proved the allegations he had earlier made.

In August 2014, when Justice Kaul was appointed as Madras HC chief justice, Justice Karnan launched into a one-man attack against many of the judges. He supposedly hurled accusations at the judges, who fell silent. It is believed that the issue was again based on discrimination. 20 judges sent a memorandum to the CJI asking that Justice Karnan be transferred since they found it difficult to work with him.

In 2015, Justice Karnan publicly alleged that another judge had sexually harassed an intern in his chamber — an allegation that he has since been unable to substantiate.

In late 2015, he wrote a letter to Justice Kaul saying he was going on a long leave because of the ‘dummy cases’ he was being allotted.

Justice Karnan, who belongs to a Dalit community, had alleged caste-based discrimination by Justice Kaul. He said that the collegium system preferred ‘high caste candidates’.

The Madras HC Registrar General took exception to this allegation and approached the Supreme Court immediately. In In February 2016, the apex court transferred him to Calcutta HC.

Justice Karnan retorted and suo motu stayed the CJI’s order of his own transfer, citing a nine-bench judgment of the Supreme Court. He also directed the CJI to file written submissions regarding the transfer. Justice Karnan had even called for a press conference inside his chambers yet again.

In Calcutta HC, he had a public spat with Justice AK Roy, who was heading their two-judge bench. In the Vivekananda Flyover collapse, several people had been killed when a flyover collapsed in the heart of Kolkata. The two-judge bench had refused bail to the accused. Later, Justice Karnan changed the order from his chambers, allowing bail to the accused. The then chief justice of the Calcutta HC had to remove Justice Karnan to a single-judge bench to hear education matters.

A similar case of contempt was initiated by the Supreme Court when lawyer Prashant Bhushan had alleged that half of the former chief justices of India were corrupt. Served a notice, Bhushan filed an affidavit with evidence corroborating his statement. Truth is a defence in contempt of court matters.

Most recently, Justice (retd) Markandey Katju was pulled up for criticising a Supreme Court bench. He had made comments in social media on a murder case.

The Supreme Court asked him to appear and explain his comments and later issued him a contempt notice. AG Rohatgi had argued that the comments may have been intemperate but not necessarily contemptuous.

Veteran jurist, Fali Nariman, appeared on his behalf and Katju tendered an unconditional apology. Since then, his comments on social media have been more measured.

While the matter was being heard, Nariman issued a temporary gag order on Katju, who stayed noticeably absent from social media sites for a while.

In Justice Karnan’s case, the allegations have been made through a public letter. He will have to produce some evidence regarding his allegations against topmost judges. One of them is Justice Sankay Jishan Kaul is a sitting SC judge. Another is Justice Ibrahim Kalifulla, who retired in July, last year.

RBI Increases Withdrawal Limits For Savings Accounts To Rs 50,000 From February 20, No Limit After March 13