G Kishen Reddy also said that people from Myanmar and Bangladesh were staying in the Old City illegally and the union home ministry will take action. 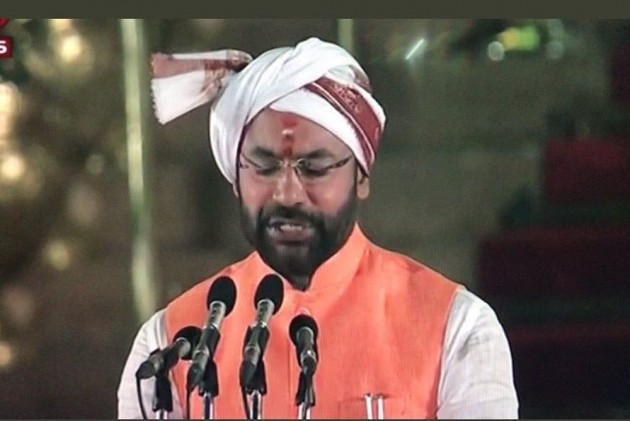 A day after he was sworn in as a minister of state in the Narendra Modi-led government, G Kishan Reddy kicked up a storm, saying all terrorist incidents in the country had their roots in Hyderabad.

Speaking to a newspaper, Reddy, who is now a minister of state for home affairs, had on Friday said: "Wherever in the county, a terrorist incident happens, its roots are in Hyderabad." He also called Hyderabad a terror safe zone.

Reddy also said that people from Myanmar and Bangladesh were staying in the Old City illegally and the union home ministry will take action.

The BJP MP's comment has ruffled feathers across the political spectrum, with Telangana Rashtra Samiti (TRS) and AIMIM chief Asaduddin Owaisi slamming Reddy for categorizing Hyderabad as a safe zone for terror.

Reacting to Reddy's statement, Owaisi said, "He has spoken in a disgraceful manner even before taking charge. Talking like this in an irresponsible manner does not suit a minister. But we expect them to talk like this because wherever they (BJP) see Muslims, they see terrorists."

"This is so unfortunate that in the last 5 years, NIA, RAW issued advisories that Hyderabad was turning into a terror hub," the Hyderabad parliamentarian said.

"There is peace in Hyderabad. All religious ceremonies took place with peace and harmony here. This is the second largest software hub after Bengaluru. Why are they (BJP) so jealous of Telangana and Andhra Pradesh? They do not want to see Telangana grow," he said.

Owaisi took a dig at the central government over the high unemployment and poor economic growth and said that BJP's voters only care about what he called "lynching rate". "Yesterday, data on unemployment and GDP was released. It showed downfall. But Modi's voter demands that keep the lynching rate at 5-6 per cent even if there is no employment," he stated.