'I have realised that when my players perform well, that has been only when they are up for it and aggressive. This is what I try to instil in their minds.' 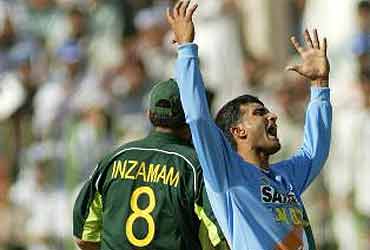 Aggression is one of the keys to the success of the Indian cricket team, according to skipper Saurav Ganguly.

Ganguly said he has always tried to inculcate a sense of aggression in his team-mates and this was beginning to show in their performances.

"I have been the captain of the team for quite some time and I have realised that when my players perform well, that has been only when they are up for it and aggressive. This is what I try to instil in the minds of the players," Ganguly said in exclusive interview in Chennai.

"To be honest I do not believe in sitting back and taking things which are not right. If it is right, I am up to it and
listen to you and try to rectify. But if you are not, I am not a sort of person to sit back and listen."

On how could India become the number one team in the world, he said, "It is simple. We have to have the consistency of the Australians who are the world number one. They have been a pretty consistent side over the years. To be the number one side, we need to beat teams more consistently.

"It is true that we played very well against Australia in the Test matches and we have shown better results over them for the last four years in the longer version of the game. But we also understand that they have dominated over us in the one-dayers," said the captain who turned 32 yesterday.

"I think it is because of the manner we played in India in 2001 and also due to our performance in Australia in 2003, that probably made people respect us as one of the best teams in the world," Ganguly said.

The skipper was, however, not willing to take all the credit for India's resurgence in recent times.

"... It is just that we have started to play better since the time I have taken over as captain. It is just a coincidence. It is the right combination of the team, the quality of the players has been very very good."

The elegant left-hander said increased level of fitness of the players had also played its part in the team's success.

"Raising the level of fitness of players is definitely one huge reason. I have noticed in my career that the fitter you are, you perform better. That is one of the reasons why we brought in a fitness trainer. Obviously there are other factors like work ethics, collectivity and co-ordination which reflect on our performances and the good performance of the team."

On his man-management skills, he said, "The players know that they have to give their best when they are on the field. It is the job of all team members when we travel as a team. There cannot be any compromise on that. But I also realise that at this level everybody wants to do well. Some may be blessed with abilities, some may not be.

"Once I am on the cricket field my relation with the person does not depend on whether he is a cricketer or not. It just depends on my personal terms and how good a human being he is."

Ganguly said although the upcoming season would be hectic, his players were geared up for the challenges including the ICC Champions Trophy in September in England.

"We are used to this as we have been playing a lot of cricket over the years. It is the matter of one's strength to withstand the strain, using your free time to rest well and such factors will definitely keep us going for performing well in any situation," he said.

The Indian skipper conceded that excessive training could put some strain on the players but said it was essential for the team in the long run.

"Yes, it does (put a strain) but at the same time we have to be fit and train hard because you play the way you train. In any other sport you see the top players -- be it tennis or football or any other game which requires a lot of running -- requires a lot of hard training. But it is the right way of training. Balancing rest and training can bring about desired results."

Ganguly saw a lot of scope for improvement in the middle overs in one-dayers, but on the positive side, acknowledged that the depth in the bowling department had increased.

"I think we can get better. We play with four bowlers and we have part time bowlers operating after 15 overs. We play seven batsmen to try and make it up with our batting. One-day cricket is all about how quickly you score runs. We definitely have to improve in the middle overs but with people like Zaheer Khan coming in, our bowling depth has increased," he said.

Ganguly, India's most successful captain ever, said the recent success of his team was largely because of a change in attitude and a growing desire to be noticed worldwide.

"It was an awareness which we needed to create in the team. If we are to be recognised as a strong team and get noticed all over the world, we have to bring this change in the attitude of the players. So the change that took place was not only in technique but also in attitude."

He admitted that India lacked a genuine all-rounder but said he tried to make up for it by assigning additional roles to his teammates.

"Sehwag is a bit of a spinning all-rounder, Sachin and me bowl a bit, so we try to make it up because we do not have a genuine all-rounder. If we have one, it will definitely help us in the fifth bowling position, that is for sure," he said.