After Meeting Kerala CM, Hanan Hamid Says She Is' Daughter Of The Govt'

The 21-year-old was viciously trolled and faced cyber bully after the story of her struggle to fund her studies and take care of her family was widely shared on social media. 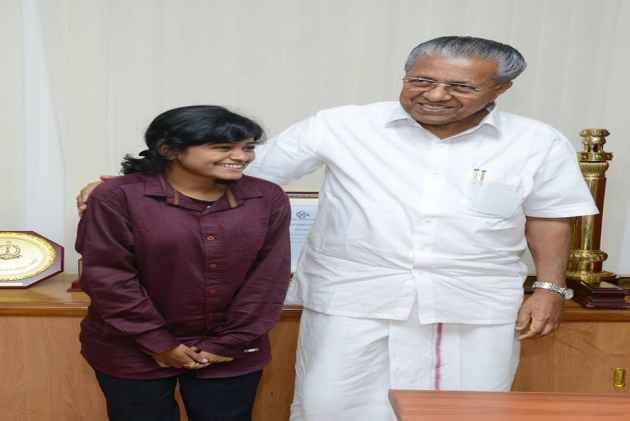 Hanan, a college student whose story of selling fish to raise money made her a national sensation, on Wednesday met Kerala Chief Minister Pinarayi Vijayan and described herself a "daughter of the government" who wants to be protected by her parents.

The 21-year-old was viciously trolled and faced cyber bullying after the story of her struggle to fund her studies and take care of her family was widely shared on social media.

She came to thank the government for the support it has extended to her, the chief minister said in a Facebook post after meeting Hanan at his office in Thiruvananthapuram.

The student had suffered "harsh cyber bullying" after her story of struggle to live and study by doing a job came out, Vijayan said, adding that the government has assured all protection to her and the culprit was arrested.

He also shared a photo of him standing besides a smiling Hanan, clad in jeans and shirt.

"Hanan came to meet after the cabinet meeting. Felt happy seeing smile on her face," the chief minister said in the post.

She came to thank the government for this. "I have assured all support and asked her to go ahead with courage", he said.

Instructions had been given to officials to ensure adequate protection to the student, he said.

Hanan later told reporters that she thanked the chief minister for the support and that she was assured all protection.

"A daughter always wishes for the protection of parents. And the chief minister has assured me all the protection. I am the daughter of the government," she said.

A B.Sc student at a private college at Thodupuzha in Idukki district, Hanan's story had become viral last week after a Malayalam daily reported about her struggles.

Her touching story was widely shared on social media by several people, including film artistes and politicians.

But, a section of social media users expressed doubts about her story and termed it "fake".

Vijayan had directed the police to initiate action against the cyber bullies following which a man had been arrested under various sections of the IT Act and the Indian Penal Code (IPC).