A Warm Winter Ahead

What goes up but doesn't come down? Well, prices of course. But there is no discernible lack of buyers. Because people have money on their hands and demand is insatiable... 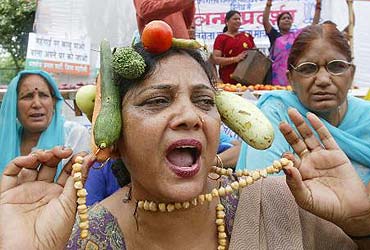 It’s well into November and potatoes are still ruling in Delhi at Rs 15 a kg. This is in spite of the new crop having come in—which is still costlier at Rs 20. Prices of pulses of course never came down since summer, despite the local government selling two varieties (with a lot of dirt thrown in) cheaper at a few designated outlets. While cauliflower is down to Rs 15, videshi green gobhi (broccoli) is Rs 80. Even as minimum temperatures rule at 15-16 degrees, we seem set for an unreasonably warm winter.

Worse, there is no lack of buyers at these prices. Vegetables are essential items, did you say? True, but that is only a partial explanation. The fact is, prices are so tightwire that any tiny demand-pull/supply-push factor can set them clawing up the hill. And why are prices on the edge? Because people have money on their hands and demand is insatiable..

A fact that worries the central bank deeply. By raising the repo rate (the rate at which banks take money from the RBI) on October 31, it very clearly told the banks that if they wanted liquidity, they better get prepared to pay more for it. Not that there is a liquidity crunch in the system already. But RBI, as we know, just feels safer being ready for it.

Still, there are some obvious pointers to a tightening system. Prices of course are the first. And give that we’re already doing over 8 per cent and targeting 10, it could be the biggest demand push to higher inflation. Naturally, the RBI’s main worry is to keep it in check. As the RBI governor explained at a press conference, "more than the loan rates touching 10-12 per cent as they used to be five-six years ago, my concern is that interest rates don’t go back to nine-ten per cent or what they used to be earlier."

The second pointer is deposit growth, which is rising much slower at 20 per cent compared to credit growth of over 30 per cent. The several interest rate hikes that have been implemented to curb the appetite for personal, durable or housing loans haven’t had much impact. As a last course—and as finance minister P Chidambaram has frequently reminded them —banks have started raising deposit rates to attract more money and if they are borrowing costlier, sooner or later they have to start lending costlier too, isn’t it?

Then there is this fear of "overheating". While the word does give rise to a scenario where the market seems ticking like a bomb, in reality all that it means is that the lag between decisions and actions is getting shorter. Projects get completed faster, a takeover deal is signed up faster than it ever used to be, investments land forthwith even from across the shores, export/import consignments reach faster than they ever did—all point to faster capacity utilization. Is the economy mature and connected enough to handle that, is also what worries RBI.

The last is credit quality. In simple terms, this means: Have the banks lent more to people who may not be able to pay back than what they actually think? The housing loans sector has grown at 54 per cent over the same time last year, and retail loans (for cars and plasma TVs) at 41 per cent. Since there has not been a noticeable rise in per capita income, it is safe to assume that some of this growth has gone to fund repeat purchases—second houses or bigger cars for instance. Has a section of the population overreached itself and could the prosperity perception be a mirage?

Most analysts don't think so. In fact, quite possibly, another quarter percentage point hike in loan rates may not affect future consumers at all—instead, there might be a scramble for loans considering that rates are on the upswing. The party is not getting over very soon, because right now at least, the potential demand situation looks set to strengthen, especially if the agricultural growth numbers turn out better than the expected 2-3 per cent..

Still, real estate prices could do well with a breather. Very soon, it will be cheaper for Indian companies to make purchases abroad than at home, whether it is companies or land. Already, hotel rates are far beyond travellers’ expectations. Although global analysts are hopeful that Asia’s party may go on independent of the downturn in the US, Indian policymakers will take time to get past their traditional inhibitions and join the dance-floor.