A Summer Of Discontent

If the arrival the leaders of the rebel NSCN (IM) leaders in New Delhi, and later in Nagaland, appeared to herald a winter of hope, their departure in mid-summer, has raised doubts on the outcome of the seven month long negotiations. 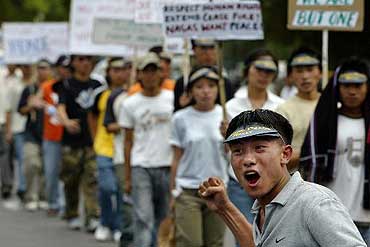 After a seven-month stay in India, talking peace, the leaders of the rebel National Socialist Council of Nagaland faction headed by 'chairman' Isak Chishi Swu and 'general secretary' Thuingaleng Muivah (NCSN-IM) returned to their 'shelters' abroad. While Swu had left sometime back, Muivah took a flight to Amsterdam on July 4, 2005. They had arrived in India to a rousing welcome by Naga supporters in December 2004, sparking hopes for a resolution of the nearly six decade-old Naga problem. If their arrival in New Delhi, and later in Nagaland, appeared to herald a winter of hope, their departure in mid-summer has raised doubts on the outcome of the negotiations.

It would be simplistic to conclude that the Naga peace process, as it stands now, is in the reverse gear. But, the forward movement that was expected is absent. New Delhi has reason to be happy that the NSCN-IM has not really pushed its key demand: that of a sovereign Naga homeland. But, the government negotiators could not get the NSCN-IM to budge from the next best option that the group thinks is actually feasible - the integration of all Naga-inhabited areas in the Northeast with the existing State of Nagaland to constitute a single politico-administrative unit. It is the logjam over integration demand that stalled the forward movement of the negotiation process.

The peace process between the NSCN-IM and New Delhi has been on since 1997, after the two sides entered into a formal ceasefire agreement. But if the outcome of the past seven months of negotiations is to be assessed, the NSCN-IM, rather that the government, appears to have secured some advantage. As a top NSCN-IM leader and the group's 'Home Minister,' R.H. Raising, told this writer on July 9, 2005: "As far as we are concerned, the current rounds of talks have ended on a positive note. We have certainly succeeded in making the Indian government understand the strength of our arguments in favour of our demands, and what the Nagas think of it. We are sincere in our effort at seeking a solution. We hope, New Delhi too comes to adopt an equally sincere approach in the days to come."

The government remains caught in a bind and shied away from telling the NSCN-IM leadership that their demand for integration of the Naga-inhabited areas in the region could not be conceded. New Delhi is aware of the mood of both the state governments and the people in the states of Assam, Manipur and Arunachal Pradesh - they have made it clear they will not part with any stretch of their territory to appease the Nagas. Obviously, the government of India cannot attempt to resolve one nagging problem only to open up several new fronts in the already turbulent Northeast.

Significant ground was, nevertheless, covered during the latest rounds of talks in New Delhi:

The direct one-on-one meetings between the top NSCN-IM leaders and the Prime Minister and other government and political leaders has certainly helped the two sides understand each other's position better. That may come in handy when the next rounds of talks begin, at a location outside India. It was such direct contacts that prevented the talks from getting derailed. At one stage, when New Delhi was silent on the NSCN-IM's integration demand, Muivah and other rebel leaders got impatient and blamed the government of trying to buy time by harping on the need for a 'consensus' on the issue. The angry rebel bosses were reassured during several informal sessions and dinner meetings at the initiative of Oscar Fernandes and National Security Adviser Narayanan.

The turnaround was evident in reassuring comments from the NSCN-IM camp - Muivah said before leaving that they can certainly return to India to take the peace process further, and the rebel group put it on record that it was still positive about the eventual outcome. Besides the tactful handling of the situation at the last moment by leaders like Fernandes and Narayanan, the NSCN-IM leadership may have realized that, if the talks were snapped off at this stage, their group, and not New Delhi, would be in a spot. All the top leaders of the group, Swu, Muivah, Raising, and many others are ageing, and, therefore, the sooner an acceptable solution is reached, the better it would be for them. Most importantly, however, the NSCN-IM leadership is certainly aware of the fact that it would not be easy to order their young cadres back to the jungles - despite the threat to do so if the situation warranted - after they have lived a life of relative comfort in designated camps and outside, for eight years at a stretch.

In the coming days, New Delhi will be busy carrying out the annual formality of extending the prevailing ceasefire between the two sides for another year, after the current term expires on July 31, 2005. Then, government negotiators would need to build on the latest 'understanding' between the two sides to try and break the deadlock over the integration issue. That will be far from easy, and would require the NSCN-IM to come up with yet another compromise offer, either on its own, or with prodding from New Delhi. The peace process has now entered a delicate stage, with options progressively narrowing, and the rebel cadres and the common Naga people becoming restive.

Evidence of this impatience was visible in the latest orgy of violence in the four Naga-dominated districts of Manipur - Ukhrul, Senapati, Tamenglong and Chandel. In blistering and coordinated mob violence on July 9, 2005, angry Naga youth torched at least 25 government buildings, including the offices of two district magistrates in these districts. Significantly, the immediate provocation for the violence was the death of a Naga youth at the hands of the police, who were trying to break an ongoing road blockade campaign. The road blockade stir had been launched in protest against the Manipur government's decision to observe June 18 as 'State integration day. '

Clearly, the 'greater Nagalim' idea has enormous potential to spark violence in the region, and even the smallest symbolic measure by either side - the Manipuris had resorted to widespread violence after the ceasefire agreement between the centre and the NSCN-IM had been extended 'without territorial limits' on June 18, 2001 - has the capacity to set off the ethnic tinderbox in wide areas around the present state of Nagaland.

A Tragedy Without An End