A Question Of Arrogance

...of a very special people who want one set rules for themselves and a different set of rules for others. Kashmiri women be damned. They have suffered in silence in the past and they will continue to suffer in the future. 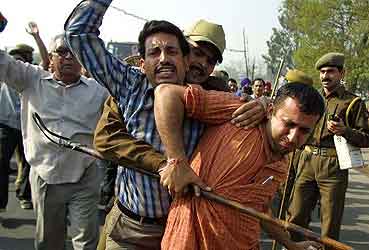 Even as the debate in the rest of India centered on the singularity of the Jammu and Kashmir Permanent Resident (Disqualification) Bill (henceforth called "the Bill") in denying women equality enshrined in the Indian Constitution, the shrill rhetoric from political adversaries in the valley did not even touch that issue.

The Bill, which had a short span of 6 days between the day it was passed in the State Assembly on March 5 and March 11 when it was shelved in the Legislative Assembly for future consideration, has again exposed how differently state leaders, especially valley based spokesmen for Kashmiri Muslims, view contemporary life in general, and our secular society in particular.

A piece of this behavior was beautifully captured in the recently released Kashmiri film "Bub" – the first Kashmiri language film in the last four decades. In the film, a valley Muslim girl (supposedly emancipated because she had lived part of her life in London) falls in love with a Kashmiri Pandit (KP) boy. Her parents recoil in horror when they learn about it, but agree to their marriage if the KP boy converts to Islam. Our heroine makes a bold statement by comparing her situation to the real life romance between Suzanne Khan and Hrithik Roshan that culminated in marriage, but it falls on deaf ears. The KP boy agrees to her parents' wishes on the condition that the parents will not object to how the couple would live after marriage, including converting to another faith, if they choose to do so. This is unacceptable to girl’s parents, as is a compromise proposed by the KP boy that they both keep their respective faiths and respect each other’s religious beliefs. There is a tragic parting soon thereafter.

If anyone thinks this is celluloid fantasy (circa 2001, when Bub was made), think again. Just look at the recent furor involving Farooq Abdullah's daughter Sarah Abdullah. Her grandfather (Sheikh Abdullah) married a woman whose father was a British hotelier; her own father (Farooq Abdullah) married a British Christian lady; her brother (Omar Abdullah) is married to a Sikh. But she was excommunicated by her family (read family males) for marrying Sachin Pilot, a Hindu boy, in January 2004. The fact that Sachin, son of late Rajesh Pilot, came from a well known political family was of little significance when it came to these worthies who claim to represent not just the Muslims of J&K but are heard swearing by Indian secularism when it suits them.

This duplicity has gone on for generations. And the Abdullahs are not the only culprits. The Chief Minister's own daughter Rubiya is married in Chennai also lost her 'citizenship' but yet the other daughter, the President of PDP, Mehbooba Mufti maintains that the law is required for "maintaining their special status" so that rich men do not marry "poor girls from our state only with an eye on state property".

They want one set rules for themselves and a different set of rules for others, including their womenfolk - indeed the womenfolk of the entire state. Why not apply this law to the men too, then, is the obvious question. It is this duplicity of the spokesmen and so-called representatives which panders to marinating an Islamic hegemony in J&K. These opportunistic leaders know that had the proposed legislation been debated first in public, it would have caused a firestorm among women of all faiths in the state.

Neither Kashmiri Pandits in the valley, nor any other community in the Jammu and Ladakh regions wish to support a Bill that represents a modern instrument of terror to impose medieval justice on the weaker segment of society. Those who crafted the Bill are not just mere chauvinists – they are Mutawas of the Jammu and Kashmir.

It is not strictly out of protecting their faith, as they would like to proclaim in front of foreign correspondents and TV crews, but out of their arrogance in believing that they are "special people" who just can not be compared to anyone else on the subcontinent.

They have always believed that common rules do not apply to them -- be these civil laws, community relationships or constitutional politics. Even an enlightened ivy-league graduate, Mr. Muzaffar Hussain Baig, state’s Finance Minister, argued "we are a special case" during the debate on the Bill, meaning that equality, fairness and the rule of law have a different meaning in the J&K.

Another example of this arrogance is their determination to deny the Chief Minister’s (CM) post to anyone other than a valley Muslim. Before the PDP-Congress coalition was formed, Mehbooba Mufti used to threaten: "blood will flow in the streets if a Kashmiri Muslim is not made the CM". Completely ignoring the fact that among the three major parties that won seats in September 2002, not only had the PDP garnered the least number of seats, it was also the least representative regionally in its victory. Mrs. Gandhi was generous in letting Mufti take over as the CM, and now the game seems to be in retaining that political power.

So we have come full circle. What is at stake for PDP is how to retain that power and not accede the CM’s post to the Congress, as envisaged by their joint-agreement in 2002. What is at stake for the NC is to wrest the power from PDP, knowing that Mufti Sayeed would rather dissolve the Assembly than hand over power to someone else. So every one is getting ready and political games have begun.

They have suffered in silence in the past and they will continue to suffer in the future. Yesterday it was a jehadi forcing "temporary marriage" on young innocents or an Islamic zealot throwing acid on their uncovered faces. Today, we have hypocrites tell Kashmiri women whom to marry and what they stand to lose otherwise.

While these leaders fiddle, the hope for peace in the state remains just that – hope.