A Profile In Courage

Anjali Waghmare's life changed so dramatically on the morning of Monday, March the 30th, that the 40-year-old lawyer married to a Mumbai police sub-inspector could not have imagined. Four days later, Waghmare represents the finest legal, moral and et 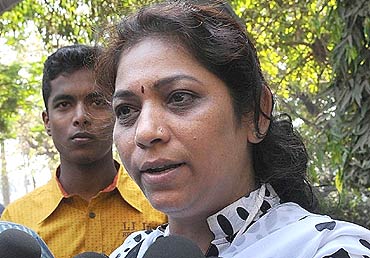 Anjali Waghmare’s life changed so dramatically on the morning of Monday, March the 30th, that the 40-year-old lawyer married to a Mumbai police sub-inspector could not have imagined. Four days later, Waghmare represents the finest legal, moral and ethical strands of the fibre that makes India.

The story has several acts.

Waghmare was in the special courtroom of the sessions court hearing the 26/11 terror attack case, the only advocate from the state legal aid cell to mark her presence in accordance with law. It was the day that special judge ML Tahiliyani ran over the names mentioned in the list provided by the cell. The first three advocates whose names were called out were not present in the court. Fourth on the list was Anjali Waghmare. The judge asked her if she would take up the case. She gave her consent. The judge confirmed her appointment. And, so she came to be the lawyer for Mohammed Ajmal Amir "Kasab", the only terrorist arrested in the horrific terror attack.

Neither did Waghmare seek out the high-profile brief, nor did she display any great desire to represent a 20-something man from across the border, who has come to represent the worst breakdown in Pakistan now. As an advocate of the state legal aid cell, she became his lawyer appointed by the court, so that trial in the terror attack case can start without further delay. All that she would be paid for her efforts would be Rs 1800 at the end of the trial; the tension and barbs would be perks. Indian jurisprudence makes it imperative that an accused is represented in court, either by himself or by a lawyer appointed by him. The special court had asked Kasab last month if he had had a lawyer; when he replied in the negative, the court asked him if he could appoint one. When he replied in the negative again, the court asked him the law allows the court to appoint one for him, and would he accept it. "Yes, sir" replied the accused terrorist. Days later, Waghmare was appointed.

In a democratic civil society that respects law, understands the values on which jurisprudence is based, and appreciates the effort of the court to conduct a fair trail, Waghmare’s appointment should have been seen as a step forward in bringing the perpetrators of the 26/11 attack to book. But some of us, clearly, are not citizens of a democratic civil society. For, that very night, close to a hundred gentlemen -- mostly from the Shiv Sena -- proceeded to Waghmare’s very modest house in Worli police quarters, armed with stones and lathis, banged her door, shouted filthy abuses about her and her family, warned her to not proceed with the brief that she had taken up in the morning, and threatened her. At the forefront of the group was a certain Eknath Omble, cousin to the late police sub-inspector Tukaram Omble who, with just his lathi, was able to overpower Kasab near Chowpatty on Nov 26th night making his capture possible, but took half a dozen bullets in his abdomen and joined the list of martyrs.

The special court opened. Anjali Waghmare walked in, rather tentatively and fearful, clearly shaken by the events of the previous night that pitched her as the traitor of India, vamp of the show. She had read the morning’s papers some of which had wondered what kind of patriotism it was to defend a man like Kasab, she was unnerved by the ugly and offensive graffiti on her main door and the walls outside, she had read the street-corner notice boards that pinned her up as India’s most undesirable character, she had heard the hushed whispers that damned her -- a policeman’s wife -- for taking up the brief to defend Kasab, for after all, it was he who had killed Mumbai’s three top cops besides Omble and many others in uniform.

Her husband, Ramesh, a sub-inspector with the Protection and Security Branch, who till then had to worry about the security apparatus of politicians, businessmen and film stars, suddenly found himself worrying about the security of his wife. Anjali Waghmare was not new to criminal cases; she had appeared on behalf of the Tegli stamp paper accused as also some of the 1993 Mumbai serial blasts accused, apart from a host of cases under TADA and MCOCA. Yet, for the first time, the Waghmares were terrified of the consequences of appearing for Kasab.

Waghmare told the court on Tuesday morning: "I am under a lot of pressure. Give me some time, a day, to think over it". Judge Tahiliyani agreed to take up the matter on Wednesday.

The system started working, as they say. State home minister Jayant Patil told the media: "She is the wife of a policeman, it seems she has taken up the matter of a victim in the 26/11 attack. We will have to consider all these facts."

Omble’s family was pressed to give their reaction. Omble’s still-distraught widow Tara, also a resident of Worli police quarters, told a local daily: "Waghmare’s decision hurt us. She’s the wife of a police officer and stays in a police colony; it was insensitive of her (to do this). My husband sacrificed his life…and she chose to defend that terrorist. I accept that Kasab should be hanged soon, and this can happen only if he gets a lawyer but there are so many others who could have taken up the case".

Political parties like the Shiv Sena stirred the cauldron even more, defending the acts of the men who had created havoc outside her house as patriotic and natural outpouring. Ten Shiv Sainiks were arrested. Ramesh had to hear snide remarks from colleagues about his wife’s motives.

Waghmare believed she was totally boxed in, from all sides. She considered, deeply, the various strands that had got mixed up, the interpretation or mis-interpretation of her agreement to defend Kasab, and her own conscience.

In her place, in the face of such pressure, a lesser woman may have given up.

Anjali Waghmare walked into the court Wednesday morning with a spring in her step, a completely new person from what she appeared the previous day. She was closely watched over by three burly, armed men in safari suits, their automatic weapons poised.

"Now the dust seems to be settling down," remarked judge Tahiliyani, "are you continuing with the case?" "Yes sir," replied Waghmare. "No problem?" he asked. "No sir," she replied, her voice firm.

Soon, the court got down to business and appointed the second advocate for Kasab, according to rules. Judge Tahiliyani remarked that after Waghmare was provided with adequate security, the trail could begin as scheduled on April 6th. As Waghmare walked out of the court room, well-known advocate and defence counsel to many a murder, blasts and fraud accused, Satish Maneshinde, told her: "You are a very brave woman…don’t worry, we are behind you".

Meanwhile, in the Bhoiwada court, the defence counsel for the ten Shiv Sainiks told the court that "these are ordinary men who cannot understand legal norms…they only understand the freedom of expression but don’t understand that it has certain limitations…the incident (stoning Waghmare’s house) was just an expression of showing extreme love for the country". The magistrate, RB Agarwal, remarked: "If these people don’t know what’s right or wrong, then what is the Shiv Sena teaching them?….Are you trying to say that apart from these people others who don’t involve in such incidents don’t love their country? You can’t say that only these ten people love this country".

Waghmare and the second court-appointed advocate KP Pawar both are now under Z-security. Waghmare is now getting used to it all -- the cumbersome security procedures, two trained Special Protection Unit guards in shifts of day and night, a specially-provided car to travel in, one escort at all times. Waghmare, "happy and confident" by her own admission, declared that she was not bogged down by the ill-informed protests, but had made up her mind that she would proceed with the brief if provided security. "It is my constitutional right to fight a case," she says, "besides people have to understand that only if Kasab is adequately represented that the trial can proceed and the judgement will be honoured".

The world’s attention is on this case. For reasons of making the courtroom secure and the trial safe, the Maharashtra government has spent Rs five crore so far. For reasons beyond control on this side of the border, the commencement of the trial has been already delayed. There are groups of people in India -- as seen on Monday night outside Waghmare’s house and as evidenced by the hundreds of chain emails and blogs that are going around damning Waghmare and her integrity -- who want Kasab "hanged for his horrific acts". There are other groups who have sprung up in Waghmare’s defence -- both personal and judicial, who want her to represent Kasab only so that the trial will be deemed fair and the sentence will be accepted by one and all.

Waghmare may be the archetypal cog in the wheel, but in a crucial judicial case that will be held up as a test of India’s judiciary, she is the best cog there is. Waghmare’s decision to return to the case -- whatever factors prompted her decision -- reflects the sanity and sense that still prevails here. Her decision was a victory over those who favoured a Talibanisation of India’s jurisprudence, those who wanted Kasab hanged without a trial preferably from the Gateway of India. Waghmare defence of Kasab is a legal formality; her defence of India’s legal system deserves a round of applause.

The final act of this story may yet be written, but so far Waghmare -- and right-thinking Indians -- are winners.