The crests and troughs of Indian cricket in 2002. 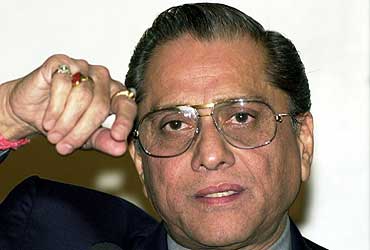 Some exhilirating wins, and some inexplicable losses -- this about sums up the Indian cricket team's topsy-turvy journey through the year 2002, marked also by players' contract issue with the Indian cricketers at the centre of the continuing row.

While the improbable victories in the NatWest Trophy and ICC Champions' Trophy gave the Indian fans much to cheer about, the meek surrender to New Zealand on wickets tailor-made for seamers ended the year on a despairing note.

For the third year in a row, Indian cricket was mired in controversy. After the match-fixing scandal in 2000 and the Mike Denness affair last year, came the contracts issue which once again pitted the Indian cricket establishment against the International Cricket Council.

With the World Cup just round the corner, the final shot in the latest stand-off between ICC and BCCI, that is centred around certain restrictive commercial clauses in players' contracts for participating in ICC events, is yet to be fired.

Outside the boardroom manouevrings, the Indian team had a reasonably satisfying year even though a Test series win outside the sub-continent remained elusive for the 17th consecutive season.

The victories in the NatWest series in England and the mini World Cup in Sri Lanka marked one of the best years for India in one-day cricket in recent times. A narrow 2-3 loss to West Indies at home was the only tournament defeat India suffered in an extremely busy year, a remarkable achievement by any means for a team that is known for its inconsistency.

There were significant performances in the Test arena too, most notably the victories in England and West Indies, but they were overshadowed by the recent 0-2 loss to New Zealand on extra-ordinarily fast and bouncy pitches that many considered were not suitable for Test cricket.

The year began with England coming back for a six-match one-day series after a Christmas break. The Indians ran to a 3-1 lead before Nasser Hussain-led side came back to win the next two matches and square the series.

The series almost cemented the place of Virender Sehwag in the opening slot after he played a couple of scintillating knocks at the top of the order as the Indians made a bold gamble by breaking the hugely successful partnership of Sachin Tendulkar and Sourav Ganguly and demoted the master batsman to provide more stability to the batting.

The third series within 18 months against Zimbabwe did not tax the Indians much though the hosts did have to contend with some anxious moments in the one-day series.

After comfortably taking the two-match Test series 2-0, the Indians were stunned by a virtually unknown Douglas Marllier who played some unbelievable shots to anchor Zimbabwe to an improbable victory in the first one-dayer at Faridabad.

After trailing 1-2 in the series, the Indians won the last two matches at Hyderabad and Guwahati to emerge a 3-2 winner. The final would be remembered for a memorable match- winning innings by Dinesh Mongia, his 159 being the fourth highest one-day score by an Indian.

After a brief rest, the team flew to the West Indies with a very good chance of ending the drought of an overseas Test series victory. A 37-run win in the second Test at Port of Spain brightened those chances but the hosts bounced back to win the next Test at Bridgetown and the fifth and final one at Kingston to win the series 2-1 and put paid to India's hopes.

India though had the consolation of winning the five- match one-day series 2-1 after the first two matches were washed out due to rain.

From West Indies, the team moved to England for a four-match Test series and a triangular one-day tournament also involving Sri Lanka, which in many ways marked the transformation of the Indian side.

After comfortably winning all but one of their league matches, India allowed England to pile up 325 in the final and then collapsed to 146 for five after a good start. The jinx of finals looked set to continue.

But Mohammad Kaif and Yuvraj Singh played the innings of their life to make possible a miraculous victory that was not just India's first win in ten tournament finals but also the second highest successful run chase ever.

That unbeaten innings of 87 under trying circumstances turned Kaif, who until now was in and out of the team - never able to show his true worth - into a big star overnight. He was to become India's new crisis man, a role he played to perfection in a couple of other matches in the ICC Champions Trophy in Sri Lanka.

Kaif was rewarded with a berth in the Test side though he did not get to play any match. But his fighting qualities had rubbed on to other players too.

After a woeful batting display had cost India the first Test at Lord's by 170 runs, the team improved its performance several notches in the next three matches.

Faced with a back to the wall situation in the second Test too, the Indian batsmen, led by 'The Wall' Rahul Dravid, fought back admirably and not only forced a draw in that match but also led India to a series-levelling innings victory in the third Test at Leeds. The fourth match at the Oval ended in a draw.

The series also started the brilliant run of Dravid who went on to score centuries in four consecutive innings - a feat achieved by only three other cricketers including Sir Everton Weekes who holds the world record for scoring hundreds in five successive innings.

Dravid scored 115 in the second innings of the second Test and followed it up with 148 at Leeds and 217 at the Oval to finish the series with 602 runs. He was then unbeaten on 100 in the first Test against West Indies at home in October.

When in England, Dravid also became the first batsman to complete 1,000 runs this year and after the second Test against New Zealand he had aggregated 1357 runs with five centuries at an average of 59.

Riding high on their good performance in England, the Indians entered the ICC Champions Trophy as one of the favourites though they were a bit distracted by the storm brewing around the contracts issue.

The Indians did not disappoint their fans and stormed into the final with victories against Zimbabwe, England and South Africa. But rain gods spoiled their party in the final against Sri Lanka and both the countries had to be declared joint winners.

The victories in the NatWest Trophy and Champions Trophy showed India's preparation for the World Cup was moving on the right track. The team had achieved the right balance, thanks to Dravid's reasonably good performance as a wicketkeeper.

But most important, the team no longer seemed totally dependant on individual performances to win matches. Everyone was contributing and it was a very healthy sign. Also the fact that India looked far more comfortable chasing totals than they were a year ago.

The Indians carried their good show into the home series against West Indies too and comfortably won the first two Tests at Mumbai and Chennai before the Caribbeans got their act together.

The West Indies fought back admirably in the third Test in Kolkata to prevent a whitewash and then achieved something which no other country had this year. They inflicted a 4-3 defeat on the home team in the one-day series, India's first limited-overs tournament loss of the year.

Still, the team was on a high as it set out for New Zealand for a two-Test and seven-match one-day series. But it was in for a rude shock as the New Zealand pacemen ambushed the Indian batsmen on wickets tailor-made for fast bowlers and won both the Tests inside three days.

The defeats reopened the debate over India's ability to bat on fast and bouncy tracks as the world's most-formidable line-up could muster just 121, 161, 99 and 154 in the four innings in the series.

The Indians cried foul over the condition of the pitches but New Zealand captain Stephen Fleming was adamant and said if the Indian batsmen were the best in the world they should be able to score on all kinds of surfaces.

The Indians were not able to take the challenge in the first one-dayer too, scoring their lowest-ever total against the Kiwis to suffer a three-wicket defeat.

With the remaining six one-dayers being their only matches before the World Cup starting on February 8, the Indians were running against time to get their act together and regain their confidence that was severely dented in the first half of the New Zealand tour.

But their below-par performance was not the only concern of the Indians. The contracts issue was yet to be resolved and going by previous experience, it was expected to keep the players' minds engaged right upto the start of the tournament.

The issue involves a few contentious clauses in the Players' Terms Form of the Participating Nations Agreement which every cricketer taking part in an ICC event is required to sign and abide by.

Such clauses hurt the Indians the most since they are the ones with maximum sponsorship deals including with companies that have a conflict of interest with event sponsors. Though cricketers of other countries also opposed such restrictive clauses, they agreed to sign the contract after their Boards offered them a compromise formula.

But the Indians were placed in a unique position and were not ready to lose their lucrative sponsorship deals. After hectic negotiations with ICC, the Indians had managed to bargain substantial concessions for the Champions Trophy but such a compromise is still to be worked out for the World Cup.

The ICC has offered another set of major concessions including reducing the restriction period after the event to five days and the validity of imaging clause to two months, but it seems the bitter wrangle would once again go down to the wire.