A Lot To Look Forward To

The junior World Cup is next year and many of the players who played the series against Pakistan will be in the team. They have now got the taste of top class hockey and more is to come during the Champions Trophy. 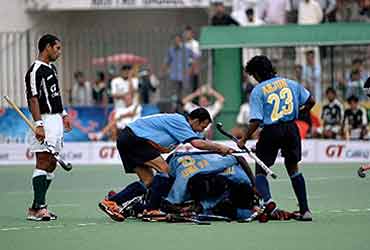 The India-Pakistan series has been a resounding success. It also demolished the myth that people no longer watch hockey. India may have lost the series has proved beyond doubt that hockey still touches a big chord in every Indian heart.

Just as the series ended, there was news that India had got a call for the Champions Trophy. This is great news. This is a God-send opportunity for the players and coach Gerhard Rach. To be able to play the best teams in the world in a premier event is indeed an honour.

The Pakistan-leg provided huge crowds across the border and when the series came to India, some murmurs were heard after the opening match in Delhi, which did not attract as big a crowd as the National Stadium could have accommodated. Yet, believe me, about 8,000-10,000 people on a working day and in the afternoon at 1.30 pm means hockey is still the national sport of this country.

The smaller stadiums in Punjab showed that the game is alive and kicking and there are enough supporters for it. When the last match was held at Hyderabad, the atmosphere was terrific -- under the lights and with a decent crowd around. To add to that India won. That is what can happen to hockey, if everything around it is right.

In the absence of quality international hockey and even the National Championships, we had almost begun to believe that people no longer wanted to see hockey. The fact is there was no hockey, so how could people decide whether or not they wanted to see it.

Also for the players, many of whom seemed new names to the public, got a chance to show their worth. With no Nationals, and only the graded tournaments taking place, there was no platform for them to show their mettle. They may have some way to go, but at least the public has seen some of them.

We have been talking about Adrian D'Souza as a great goalkeeper, and after the Olympics, he has been able to show his class at home as well.

Dilip Tirkey has emerged as the pillar of the team. Ignace Tirkey, Vikram Pillay, Sandeep Michael and Viren Rasquinha have also shown good performances, but I will be happy to see more goals. The penalty corners are the big hole in our plans.

Sandeep Singh is too inconsistent. Also ball stopping during set pieces needs to be worked on. We need variations to catch the opposition off-guard. Then to supplement that, we need our players to be alert to avoid conceding goals off counter attacks.

Above all, taking time to settle down and not going all out till the last second is going to be another area of worry for Rach. There were some loopholes in trapping and off-the-ball running too requires improvement.

Having said that, I must also admit that the side has enough talent to improve on these areas of concern.

This will be the third successive year we will be going to the Champions Trophy and next year the event is at home. So, these two chances should be used to ensure that the Indian team is in perfect shape for the assault on the Asian Games gold medal.

The junior World Cup will be held next year and many of the players who played the series against Pakistan will be in the team. They have now got the taste of top class hockey and more is to come in the Champions Trophy.

And yes, despite the series loss, Indian hockey has a lot to look forward to.