There are more and more reasons to be worried about the security of Pakistan's nuclear establishments--if not of its nuclear arsenal. 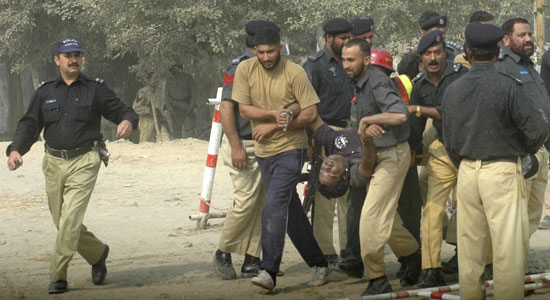 In the wake of the four well-orchestrated commando-style attacks launched by different terrorist groups against security establishments on October 15,2009 -- three in Lahore and one in the North-West Frontier Province -- followed by a fifth attack in a residential area in Peshawar  -- Rehman Mallick, Pakistan's interior minister, is reported to have aptly described the increasingly uncontrollable situation faced by Pakistan in the Pashtun tribal belt and in Punjab as a guerrilla warfare launched against the state of Pakistan.

149 fatalities--security forces personnel and civilians as well as terrorists-- have been reported in a relentless series of fidayeen attacks launched by different groups since October 5, 2009. Among the targets of the terrorists were the highly-guarded but easily penetrated General Headquarters (GHQ) of the Pakistan Army in Rawalpindi, a Lahore office of the Federal Investigation Agency (FIA), which is responsible for the investigation of terrorism-related cases, two training institutions in Lahore and a police station in the NWFP. Rehman Mallick used to be a senior officer of the FIA when Benazir Bhutto was the Prime Minister from 1993 to 96.

The attacks are more and more fidayeen (suicidal) than suicide and have involved a mix of modus operandi--use of hand-held weapons and explosives. Suicide attacks involving explosives-laden vehicles continue to take places against convoys of security forces, but commando-style attacks against well-fortified and supposedly well-guarded fixed establishments of the Army and the police are taking place with increasing frequency--to demonstrate the ability of the terrorists to attack with ferocity despite supposedly enhanced physical security. 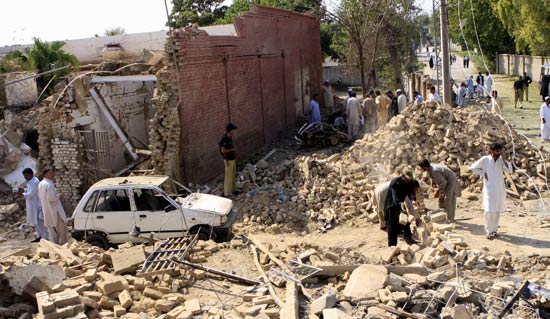 Of the first four attacks reported on October 15, two were against targets which were attacked earlier--the FIA office office in Lahore and the police training academy at Manawan, a Lahore suburb. They had both been attacked in March last, following which physical security was reportedly enhanced. This could not prevent the terrorists from attacking them again. About 20 terrorists split into three groups are reported to have participated in the three attacks in the Lahore area on October 15--against the FIA office, the Manawan Police Academy and a commando school at Bedian on the outskirts of Lahore. It is not yet clear whether the Bedian commando school is of the police or of the army's Special Services Group (SSG). It is, however, noticed that the security forces personnel who participated in the fighting against the attackers at Bedian, which reportedly lasted about four hours, were mainly from the Army and not from the police.

At least 10 of the attackers in Lahore perished--some were killed by the security forces and some blew themselves up. The fourth attack of the day on a police station at Kohat in the NWFP was carried out by a lone vehicle-borne suicide bomber. There were 32 fatalities in the four attacks--of security forces personnel as well as civilians caught in the firing or explosion.

Poor intelligence, poor investigation, poor physical security in establishments of the security forces, including in the army's GHQ, poor access control, poor road security and poor morale and motivation as seen from the failure or reluctance of the security forces personnel to give a chase to the surviving terrorists and capture them continue to be the bane of Pakistan's counter-terrorism mechanism. One saw this after the attack on the Sri Lankan Cricket team earlier this year when the terrorists just sauntered away after the attack without being stopped or chased and caught by the security forces.

While the morale, motivation, training and resilience of the terrorists belonging to different Taliban affiliates have been steadily increasing, there are worrisome signs of poor morale and motivation among the security forces. One notices also an alarming casualness and a lack of professionalism in performing their counter-terrorism tasks There is a tendency, even in the army, to avoid coming to terms with the ground reality, which is that the situation, which has already deteriorated in the Pashtun tribal belt, has now started deteriorating in the non-tribal areas of Punjab. Senior political leaders and military officers continue to behave with a certain nonchalance as if they are the masters of the situation despite the repeated attacks. Seriousness and determination in dealing with the situation are totally lacking.

There are more and more reasons to be worried about the security of Pakistan's nuclear establishments--if not of its nuclear arsenal. If the terrorists can lay hands on Pakistan's nuclear waste, which is stored in the NWFP, they could threaten the international community with the use of dirty bombs. Even if one feels that the fatalities due to the use of nuclear waste may not be much, the psychological effect on the general population could be high.