'This tour has helped me tremendously and I have gained what I might not have learnt in 50 Tests as captain.' 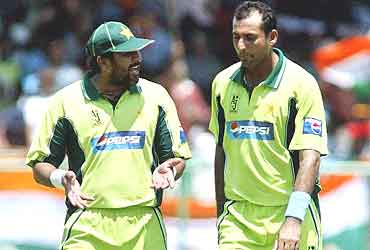 Pakistan skipper Inzamam-ul Haq, who has often been criticised for not being innovative and not asserting his authority in the field, said the successful tour of India was a "great learning experience" which helped him to mature as a captain.

"I would say that this tour has helped me tremendously and I have gained what I might not have learnt in 50 Tests as captain," Inzamam said from Lahore.

"I kept revising the game plan according to the situation which kept changing probably every over. I made regular changes in the batting order, kept rotating the fielders and experimented with regular bowling changes. It has been a tough but great learning series as a captain," he said.

Inzamam's men, who were virtually written off as pushovers when they landed in India, drew the Test series 1-1 and went on to record a remarkable come-from-behind 4-2 series win in the one-dayers.

The 35-year-old veteran of 100 Tests said his players deserved all the praise and they should enjoy the moments after the tension filled 50-day tour but should not get overwhelmed with the win.

"The team should enjoy and celebrate these moments because they deserve it. But they can't live on these laurels forever. It's a performance and result oriented world and we can only survive by maintaining consistency in our performances.

"We have to keep our feet on the ground, stay humble and collect all the praise, well-wishes and prayers because these will help us in future," Inzamam said.

"I admit that after nearly three months, I slept tension-free and there were no nightmares haunting me in my dreams. It's a feeling like I am reborn."

He added with laughter: "I don't want to leave the bed. I have hardly laid on it to relax in the last couple of months."

Inzamam's men were not given even a half chance on the tour as the team had no star players, they had been thrashed on the previous tour of Australia, India were a more experienced team playing in their own backyard and lastly, Shoaib Akhtar was grounded with a hamstring injury. By all means, this was the weakest-ever team to leave the shores.

"It has been an extremely tough and tension-filled series and only those involved in it can feel those pressures.

"My boys have gone through tough times and now they richly deserve the praise, rewards and appreciation because they have earned it through a dedicated and committed performance," Inzamam, who won his first one-day series as captain since taking over charge in October 2003, said.

Inzamam now has drawn Test series against Sri Lanka and India while he has suffered defeats against India and Australia. He has won against Graeme Smith's South Africa and Stephen Fleming's New Zealand.

The skipper said when he saw the flood of Pakistan supporters waiting outside the arrival lounge at Lahore airport yesterday to catch a glimpse of the players, the complete tour film rewound through his mind.

"I was collecting my baggage when Shoaib Malik and Rana Naved-ul Hasan left and I could see through the glass that they were being patted, garlanded, showered with rose petals and what not.

"It was then I recalled what they had gone through during the last two months. I don't think I will do justice if I try and describe their efforts in words.

"But I must admit that their efforts would not have paid dividends had the Almighty not listened to the prayers of our supporters. It was not a Pakistan cricket team's success but the entire nation's victory," said Inzamam, who is one of the devout nine players who offer prayers five times a day.

Admitting that yesterday's reception reminded him of the welcome the national team got after winning the 1992 World Cup, the Pakistan captain said he disagreed that his team was weak."It is inexperienced but talented," he said.

"Nowadays, there is so much cricket being played that in six months, you have 50 one-day internationals under your cap. But that doesn't mean you have gained experience.

"If you look at my team, I think besides me, Yousuf Youhana, Younis Khan, Abdul Razzaq and too some extent Mohammad Sami were experienced while the rest were raw but talented," he added.