During life as well as after his death, Napoleon had ardent admires all over the world... 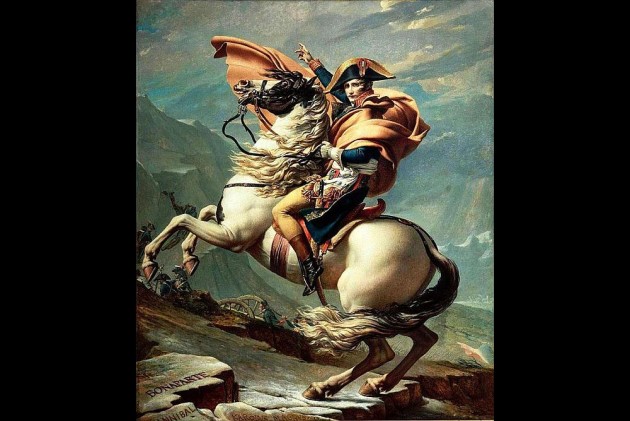 Napoleon sensed during his self-exile that the alliance of Russia, Austria, Prussia and England was not formidable and Bourbons would not be able to manage the affairs of France. So he escaped from Elba and returned to Paris in 1814.

Mobilising the soldiers and raising the army, he decided to meet the English and Prussians near Brussels, where Wellington was camping. The battle was to join in Waterloo, a village nearby.

Napoleon was not only happy with his plan but was sure that Wellington had a defective one. The Battle was joined on June 18, 1815.

Napoleon envisaged obstructing the British forces from joining the Prussians, thereby engaging each separately and defeating both. His strategy went awry, as his reserve force, without any call, joined the battle and the one, which was to join earlier, failed to turn up.

Though Napoleon was a far superior commander, he had overlooked the fact that Wellington was cool, calculating and expert in 'strategic retreat'. Napoleon misconceived Wellington's move and was taken aback, when those retreated British forces rolled back along with the Prussians.

Napoleon then told his immediate assistants that the day was over and he had to rush back to Paris, where a usual rousing reception by the people was not awaiting him. On the contrary, the Chamber of Deputies, who had the real power, demanded his abdication.

With that, Napoleon lost everything — his power, highest place in the land and his country. It was a great fall. The British, Prussians, Austrians and Russians declared that Napoleon could not be trusted to keep the peace.

Napoleon preferred to stay in Britain as a country gentleman. But the allies decided that he should be sent to St. Helena, a small island on the west coast of Africa, in possession of Britain.

The boat, in which Napoleon was to travel, was in Plymouth. As the news reached the people that Napoleon was on board, they flocked to the area, taking whatever transport available, however expensive, to have a glimpse of him. They waved at the Emperor, when they saw him on the deck.

Napoleon sailed with Admiral Cockburn in command and reached St. Helena on October 15. Churchill called this "a journey to sunset".

Napoleon cherished his title, Emperor. Nevertheless, he was given an official letter, addressing him as General. Napoleon said, "They may call me what they please, but they cannot prevent me from being myself". Several rules and restrictions were imposed.

The allied chiefs were apprehensive that the British might not be strict with Napoleon, as by and large, the British people were under his spell. They also knew that various British navy officers had pictures of the French General in their cabins, and his small busts were purchased by several others. However, the new Governor of the island, Sir Hudson Lowe had bitter relations with Napoleon. He was overzealous with restrictions.

Napoleon always complained against the climate, which was hot and had too much rainfall. The island and the house given to him were small. He passed his time by horse-riding and walking. He missed the gardens and flowers he loved. One day Napoleon had a tiff with Lowe, and for some time there was no contact between them.

Napoleon decided to dictate his views and experiences of the series of wars.

He was a voracious and a fast reader, with a marvelous memory. His reading subjects varied.

One day Admiral Cockburn and Napoleon spent a long time talking about various wars. One gets an impression that both were engaged in dissecting the problem like scientists.

Napoleon used to discuss poetry of a Scottish poet with the Scottish wife of an English official.

One of his visitors made remarks about music, which Napoleon disapproved. He told him that it is music, which touches the soul and melts it, which moral pontification could not do.

This life in exile was miserable. It was taking a toll. Because he was spending more time in the house, he became fat, which he hated. He was very particular about his personality as well as his dress.

Nevertheless, during life as well as after his death, Napoleon had ardent admires all over the world, including Beethoven, Goethe, Balzac, Byron, Sir Walter Scott, Keats, Carlisle, Hazlitt, Churchill.

On the day of his death centenary in 1921, the Times (London) had a special supplement, with articles from noted personalities. The Times editorial said, "A century had not sufficed to show the full meaning of his life, nor has it produced any man comparable to him in force of will, energy, military genius or, perhaps, even in sheer power of intellect".

I think, the same holds true even two centuries after Waterloo.