It's over 13 years now but, political rhetoric aside, we, as a nation, have become immune to the plight of the Kashmiri Pandits who remain largely irrelevant in the political discourse -- both within and outside the country. 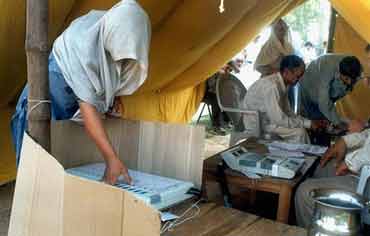 January 19 marked thirteen years since what is generally recognized as the beginning of the process of ethnic cleansing by which the Kashmiri Pandits (descendents of Brahmin priests) were hounded out of the Kashmir Valley. On this day, a Kashmiri Pandit nurse working at the Soura Medical College Hospital in Srinagar was raped and later killed by Pakistan-backed terrorists. The incident was preceded by massacres of Pandit families in the Telwani and Sangrama villages of Budgam district and other places in the Kashmir Valley.

While the Jammu & Kashmir Liberation Front (JKLF) claimed a 'secular' agenda of liberation from Indian rule, the terrorist intent was clearly to drive non-Muslim 'infidels' out of the State and establish Nizam-e-Mustafa (literally, the Order of the Prophet; government according to the Shariah).

Accounts of Pandits from this traumatic period reveal that it was not unusual to see posters and announcements telling them to leave the Valley. On April 4, 1990, for instance, a prominent Urdu newspaper, Alsafa, carried the following headline: "Kashmiri Pandits responsible for duress against Muslims should leave the valley within two days."

Pandit properties were either destroyed or taken over by terrorists or by local Muslims, and there was a continuous succession of brutal killings, a trend that continues even today. Ethnic cleansing was evidently a systematic component of the terrorists' strategic agenda in J&K, and estimates suggest that, just between February and March 1990, 140,000 to 160,000 Pandits had fled the Valley to Jammu, Delhi, or other parts of the country.

Simultaneously, there were a number of high-profile killings of senior Hindu officials, intellectuals and prominent personalities. Eventually, an estimated 400,000 Pandits - some 95 per cent of their original population in the Valley - became part of the neglected statistic of 'internal refugees' who were pushed out of their homes as a result of this campaign of terror. Not only did the Indian state fail to protect them in their homes, successive governments have provided little more than minimal humanitarian relief, and this exiled community seldom figures in the discourse on the 'Kashmir issue' and its resolution.

A majority of the Pandit refugees live in squalid camps with spiraling health and economic problems. Approximately 2,17,000 Pandits still live in abysmal conditions in Jammu with families of five to six people often huddled into a small room. Social workers and psychologists working among them testify that living as refugees in such conditions has taken a severe toll on their physical and mental health.

Confronted with the spectre of cultural extinction, incidence of problems such as insomnia, depression and hypertension have increased and birth rates have declined significantly. A 1997 study based on inquiries at various migrant camps in Jammu and Delhi revealed that there had been only 16 births compared to 49 deaths in about 300 families between 1990 and 1995, a period over which militancy was at its peak.

The deaths were mostly of people in the age group of 20 to 45. Causes for the low birth rates were primarily due to premature menopause in women, hypo-function of the reproductive system and lack of adequate accommodation and privacy. Dr. K.L. Choudhary, who has been treating various Kashmiri Pandit patients, asserts that they had aged physically and mentally by 10 to 15 years beyond their natural age, and that there was a risk that the Pandits could face extinction if current trends persist.

On the abysmal conditions at the camps, one report stated that, at the Muthi camp on the outskirts of Jammu where most of the Pandits stayed after migration from the Valley, a single room was being shared by three generations. In certain cases at other places, six families lived in a hall separated by partitions of blankets or bed sheets.

The Pandits have rejected rehabilitation proposals that envision provision of jobs if the displaced people returned to the Valley, indicating that they were not willing to become 'cannon-fodder' for politicians who cannot guarantee their security. The Pandits insist that they will return to the Valley only when they - and not these 'others' - are able to determine that the situation is conducive to their safety.

"We cannot go back in the conditions prevailing in Kashmir. We will go back on our own terms," Kashmiri Samiti president Sunil Shakdher said in August 2002 in response to the then Farooq Abdullah regime's proposed rehabilitation agenda. At the minimum level, these terms would include security to life and property and, at a broader level, a consensual rehabilitation scheme.

Any proposal to return the Pandits to the Valley in the past has been cut short by terrorists. Whenever any attempt aimed to facilitate their return to the Valley has been initiated, a major incident of terrorist violence against them has occurred. The massacre of 26 Pandits at Wandhama, a hamlet in the Ganderbal area of the Valley on the intervening night of January 25-26, 1998; the earlier killing of eight others at Sangrampora in Budgam district on March 22, 1997; and the massacre of 26 Hindus at Prankote in Udhampur District on April 21, 1998; are only three of the many examples of the terrorists' tactic to block any proposal for the return of migrants to the Valley.

These massacres and a continuous succession of targeted individual killings have ensured the failure of every proposal to resolve the problem of the exiled Pandits. It was, again, this pervasive insecurity that led to the collapse of the proposal to create 13 clusters of residential houses in 'secure zones' in different parts of Anantnag for the return and rehabilitation of Kashmiri Pandit migrants from outside the Valley in April 2001.

Earlier, in 1996, the then Chief Minister Farooq Abdullah had formed a six-member Apex Committee under the chairmanship of Abdul Ahmed Vakil, then Relief and Revenue Minister, with the objective of drawing an action plan for facilitating a safe and honourable return of the migrants to the Valley.

Based on the views of the migrant Pandits and the Apex Committee's interim report, the State government subsequently announced a Rs. 28 billion rehabilitation package. The scheme included the creation of an authority of the Protector General of Migrant Properties; Rs. 1,00,000 for each Kashmiri migrant family willing to return to the Valley; setting up of a transit settlement at Srinagar, Anantnag and Baramulla Districts; rehabilitation grants of Rs. 150,000 to each house; waiver of loans; a sustenance allowance of Rs. 3,000 to those migrants who had been employed in the private sector; and opportunities for the children, among others.

Ramesh Manvati, General Secretary of Panun Kashmir (a frontline organisation of the Pandits), said on January 19, 2002, that the J&K government's rehabilitation of some Pandits at Tulla-Mulla in Srinagar and Matan in the Anantnag district "is being done without consulting us and is largely an eyewash." The Kashmiri Samiti had asked for a probe into the alleged missing 18,000 job applications invited by the Abdullah government from Kashmiri Pandits. The Samiti also claims that approximately 3,000 jobs had fallen vacant since many Pandits in government service had retired over the years, and that not a single person had been appointed from the community so far.

The current Chief Minister Mufti Mohammed Sayeed, addressing his maiden press conference at Srinagar on November 3, 2002, said that the rehabilitation of migrant Pandits was one of his government's 'top priorities', adding that, "Their (the Pandits') migration is a blot on the identity of Kashmir."

The Pandits, however, regard the Sayeed regime's 'healing touch' policy with great skepticism. The regime's decision to release a number of terrorists and secessionists on bail and the proposal to hold talks "without any pre-conditions" with a mélange of groups actively pursuing the agenda of violence has led a section of the Pandit community to believe that the State government, "is turning a blind eye to our plight…"

For a majority of the displaced Kashmiris, the recent State Legislative Assembly elections held little meaning. Panun Kashmir, during the run up to the State Legislative Assembly elections in 2002, had dismissed the exercise as 'meaningless'. They said the Election Commission's decision to make arrangements for Hindu migrants to vote from outside J&K would institutionalise their migrant status. "The move to allow migrant Hindu Pandits to vote at their respective refugee camps only reinforces the mindset that there are no chances for them to return to their homes, ever," said Shakdher.

A section of the Pandits have demanded a geo-political re-organisation of the State and the carving of a separate homeland for them. Ramesh Manvati believes that this "is the only viable option available for our rehabilitation." While such an extreme measure may arises out of the increasing desperation of a people whose plight has been ignored for nearly a decade and a half, the idea itself is fraught with the imminent danger of playing into the hands of religious extremists who seek a division of the State along religious lines.

Their relatively small numbers, coupled with a tradition of non-violent protest, has made the Pandits largely irrelevant in the political discourse - both within the country and internationally - on Kashmir. It should be clear, however, that the many 'peace processes' and 'political solutions' that are initiated from time to time have little meaning until these include some steps to correct the grave injustices done to this unfortunate community.