A Colourful Character, An Intelligent Performer

Where recognition for his multifarious talents is concerned, Olonga might be handicapped by being born in the wrong continent at the wrong time 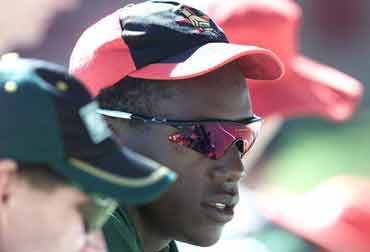 With the retirement of Henry Khaaba Olonga at 27, cricket has lost a colourful character, an intelligent performer, and one whose vision went beyond the boundary. It is unlikely that he will return to Zimbabwe as long as Robert Mugabe continues to be that country's strongman; Olonga has burnt his bridges with the kind of conviction that makes for heroes.

Long after Mugabe is gone, Olonga will be remembered for taking a stand against corruption and human rights violations in his native land. "If I were to continue to play for Zimbabwe I would do so only by neglecting the voice of my conscience," he has said.

"I would be condoning the grotesque human rights violations that continue to be perpetrated against my countrymen." If Olonga's protest had a greater impact than that of the England team, it was because he had more to lose.

The bravery of men like Olonga and Andy Flower -- who wore black bands when they first took the field in the World Cup -- was pushed into the background as the tournament progressed. Can you imagine a Tendulkar or a Ganguly taking the field in black arm bands to protest against the corruption among our politicians?

Sport cannot exist in a vacuum; without a context, there can be no meaning.

To repeat the cliche that sport and politics ought not to mix is a cop out. They are part of the same continuum along with economics, culture, theatre and entertainment and all other aspects of human endeavour. Is a sporting event the right occasion for making a political statement?

The International Cricket Council didn't think so, falling back on something called the purity of sport. But if such a purity ever existed -- and I doubt if it did -- it has long been made impure by outside elements. In the modern context these would include drugs and security problems, politics and outright cheating. Sportsmen tend to keep sports and politics in separate compartments, either because it is convenient to do so or because they simply lack a world-view.

When the late Colin Cowdrey was president of the ICC, I met him in South Africa just before India's first-ever Test in that country. I asked him if he didn't think it was a great moment when a black man was about to see action from behind the bowler's arm for the first time. And also if he didn't think it strange when he toured South Africa as a player that non-whites were herded into cages from where they could barely see what was going on.

"We never dwelt on these things," he replied.

That is why we must celebrate those who dwell on these things, and not merely dwell, but stand up to be counted. It becomes easier to condone what Olonga and Flower did because they were the good guys. By handling themselves with dignity, the two players brought to their protest an element of nobility that shouting from rooftops fails to do.

Flower's future is in Australia and cricket; Olonga's is in any of four continents and any of the three or four professions. And thereby hangs a tale. For cricket was only one facet of his multi-faceted personality. Not since CB Fry, world record holder in the long jump, classics scholar at Oxford, and world table tennis champion, has a cricketer reserved the right to say, like Walt Whitman, "I am large; I contain multitudes."

It is tempting to call Olonga the Black Fry or the Modern Fry, but not even Fry could claim to have an operatic voice with a best-selling single to boot! Then there is the matter of his poetry and painting. The Zimbabwean icon was actually born in Zambia (a fact that is being made much of by his enemies in Harare who wish to soften the impact of a man willing to give up everything for his beliefs).

The family (his mother is a Zimbabwean) moved to Bulawayo in Zimbabwe for the superior educational opportunities. His father, a Kenyan pediatrician, wanted Olonga to run for Kenya in the Olympic Games. That was an early career option. At 16, Olonga was capable of jumping 24 feet, and running the 100m in 10.6 seconds. He rewrote 18 athletics records.

He also sang Comfort Ye in Handel's Messiah, and was the finalist in Zimbabwe for the best actor for his role as Charlie Davenport in Annie Get Your Gun. It is a combination of accomplishments that will serve him well now.

In 1992, Olonga became a committed Christian, and began to see the world and his personal triumphs and disappointments as being part of a grand plan. At 18, Olonga made his Test debut against Pakistan, the youngest from his country and the first black to do so. He claimed a wicket in his first over; he was also called for chucking. He had picked up bowling by watching older boys, and it wasn't until Dennis Lillee worked with him that he was able to sort out his action.

By playing crucial roles in victories over Pakistan and India, Olonga ought to have been a certainty in the national side. But injuries kept him out of the team when selectorial whims didn't. In the '96 World Cup, for example, he was dropped initially, and was finally picked for the Sri Lanka match. He stood down himself because he felt he was out of practice.

Two seasons later, he found a chink in the armour or Sachin Tendulkar in a Sharjah tournament. He had pace, direction, and a drive that saw him trouble the Indian repeatedly outside the off stump. Even when Tendulkar hit him for six over cover point, Olonga knew he had beaten him, and the shot was a mishit.

A year later, he led the charge as India fell to Zimbabwe in the World Cup. He revealed then that he was working on his outswinger with as much focus with which he was working on his CD. Post-cricket, music would seem to be his first option. Or lay preaching. Or television commentary. Or social work (he works with children at risk the world over). Or being the rallying point for anti-Mugabe groups outside Zimbabwe.

Where recognition for his multifarious talents is concerned, Olonga might be handicapped by being born in the wrong continent at the wrong time. His accomplishments would have been the stuff of song and legend anywhere else. But perhaps there is a larger design. Perhaps this is not a retirement so much as a rebirth.