Home  »  Website  »  International  »  A Brief Outline of the Hindutva Movement

A Brief Outline of the Hindutva Movement

The Foreign Exchange of Hate: IDRF and the American Funding of Hindutva

2. A Brief Outline of the Hindutva Movement

The Rashtriya Swayamsevak Sangh (RSS, or the ‘Sangh,’-- literally ‘National Volunteer Corps’), was started in 1925 for ‘propagating Hindu culture.’ As an organization, the RSS is elusive and shadowy—it is only open to Hindu males – primarily upper caste; it maintains no membership records; it has resisted being registered with the Government of India as a public/charitable trust; it has no bank accounts and pays no income tax.

2.2 Hindutva: The Ideology of the RSS

The RSS advocates a form of Hindu nationalism, which seeks to establish India as a Hindu Rashtra (Hindu Nation), and rejects the notion of a composite Indian identity brought about by a synthesis of different cultures and faiths. The RSS claims to be inclusive of all those who are racially and culturally Hindu and places outside of the nation all those who adhere to and identify with a different faith or ethos, thus establishing the idea of a Hindu Rashtra as an exclusive one where minorities are, at best, second class citizens. This particular ideology is variously called an ideology of Hindu pride, Hindu patriotism, Hindu fundamentalism, Hindu revivalism, Hindu chauvinism, Hindu fascism or Hindutva, depending on who controls the definition. What is beyond doubt is the exclusionary and discriminatory nature of the ideology. In this report we use the term used most often in the mainstream press – Hindutva – which translates literally to Hinduness or Hinduhood.

2.3 The Hindutva Movement and the Sangh Parivar

While the foundational core of Hindutva is inculcated in the RSS swayamsevaks (volunteers) through training that begins from childhood in its local shakhas (cells), the broad based work of spreading the ideology and its politics is undertaken through a network of organizations. The RSS (or more commonly, the Sangh) has created and propagated organizations in every facet of socio-political life in India—from political parties to children’s centers, trade unions and militias. These groups are together known as the Sangh Parivar or the Sangh Family of organizations. In recent years, the Sangh Parivar has also expanded its operations outside India and made significant efforts to reach the ‘Hindu’ diaspora, especially in the US, the UK and the Caribbean.

2.4 Constituents of the Sangh Parivar

The spread of the Hindutva ideology in India is carried out at the grassroots level through an army of swayamsevaks deployed by the Sangh Parivar. The recruitment and ideological 'orientation' towards Hindutva is done on many levels and fronts: at the grade school level, or earlier, with Hinduised education, including such 'educational' activities as the holding of Ramayan and Mahabharat competitions for school children in tribal areas—largely with the goal of supplanting tribal culture and traditions; with the 'celebration' of Hindu festivals on a grand scale in areas with large non-Hindu populations; and simultaneously, with the distribution of anti-minority pamphlets and literature and the sporadic creation of anti-minority programs such as the grabbing of minority land or buildings or the promotion of riots and murder. For these purposes, the Sangh has set up hundreds of smaller organizations all over the country, all supervised by volunteers from the Sangh and centrally coordinated, even though each claims to be independent of the Sangh.

While the RSS itself cannot currently accept monetary contributions for its activities from abroad, each of the Sangh-affiliated organizations has been designated a 'charity' and the Sangh actively solicits foreign funding for these organizations. In other words, given that the RSS has no corporate form and ensures an ambiguity around its specific location and form, it would be quite correct to argue that this myriad of smaller organizations together is what precisely constitutes the RSS.

Each of these has a US equivalent –

2.5 Organizational Structure of the The Sangh Parivar {and the US equivalents} 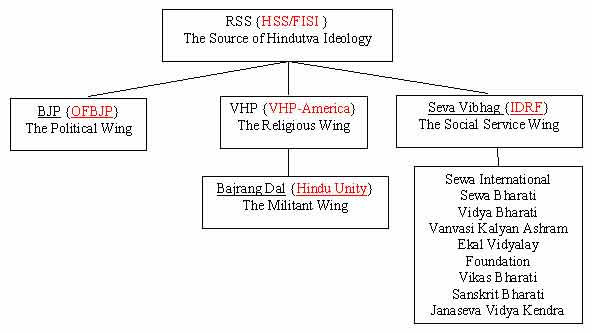 2.6 The Methods of the Sangh: From Violent Riots to Planned Pogroms

Violence is a central strategy in the Sangh’s rise to political power. Often the Sangh presents its use of violence as “self-defense” against armed minority gangs—an idea that is supported by a claim that Hinduism is inherently a tolerant and peaceful religion. While large numbers of Hindus living all across India would shun violence just as many others of different faiths do, Hindutva has, from its inception, been very clear on the necessity of violence.

The use of violence as a political strategy has been clearly outlined by some of the earliest proponents of Hindutva [1].


2.6.2 The Sangh’s Participation in Communal Riots

Violence has not remained an abstract desire within Hindutva—there is ample evidence that this essential and strategic understanding of violence has continuously been practiced by the Sangh. Numerous government reports have clearly indicted the Sangh for fomenting communal violence [2]. In each of these communal riots that the RSS fomented and participated in, the central strategy to greater power is clear. For the Sangh each religious riots translates to greater polarization between the majority Hindu community and the minority communities. Further, riots serve as a basis for the RSS to work with those parts of the “Hindu” community that are not part of the Hindutva project.

In other words, every communal riot that the Sangh incites is the basis for both:

While this dual process of polarization and consolidation has been central to the rise to power of Hindutva, what has changed in more recent times with the ascension of the BJP to State power, and the growth of the VHP and the Bajrang Dal, is that the communal riot has now transformed into an organized pogroms, where minority populations, residences, businesses and institutions are targeted with almost military precision.

After 1998, when the BJP party came to play a leading role in the government, violence against Christian minorities in India has significantly escalated [3]. Between January 1998 and February 1999 alone, there were 116 attacks against the Christian community in India [4], specifically targeting Christian missionaries, priests, nuns, schools and churches. Documenting anti-Christian violence in 1999, the South Asia Human Rights Documentation Center report states:

“Most of these attacks have been perpetrated by individuals connected to the Sangh Parivar, which is comprised of rightwing Hindu fundamentalist organisations including elements from the ruling Bharatiya Janata Party (BJP), Vishwa Hindu Parishad (World Hindu Council), Rashtriya Swayamsevak Sangh (RSS), Bajrang Dal and Hindu Jagran Manch.”[5]

The Gujarat Genocide of 2002 has been by far the most elaborate and well-planned pogrom to date. Numerous reports have documented the massacre of more than 2000 Muslims, the rape, mutilation and murder of Muslim women, the specific targeting of Muslim businesses for burning and arson, and the destruction of Muslim homes leaving in excess of 150,000 Muslims homeless [6]. According to the Human Rights Watch,

“The groups most directly involved in the violence against Muslims include the Vishwa Hindu Parishad (World Hindu Council, VHP), the Bajrang Dal, the Rashtriya Swayamsevak Sangh and the Bharatiya Janata Party (BJP) that heads the Gujarat state government. Collectively, they are known as the sangh parivar, or family of Hindu nationalist organizations. … Numerous police reports filed by eyewitnesses after the attacks have specifically named local VHP, BJP, and Bajrang Dal leaders as instigators or participants in the violence.” [7]

What is currently unfolding is no longer simply the processes of polarization and consolidation (though these continue), but a planned effort at eliminating any semblance of power that a minority community may have, either economic or social.

Probably there is no better way to understand the growth of violent Hindu fascism in India than to look at it as the violent history between two moments in independent India. The first is the assassination of Mahatma Gandhi, the apostle of peace, by Nathuram Godse, a prominent member of the Hindutva movement in 1948 and the second is in Gujarat Genocide of 2002, in Gandhi’s homeland of Gujarat.

(This part of the report describes various aspects of the Sangh and the Hindutva movement in a summary form. For a more detailed discussion of Hindutva and the Sangh see Appendix A.