A Blip On The Screen

The draw at Mohali was salvaged purely because Kamran Akmal played the innings of his life and so did Abdul Razzaq. These two sterling performances can do nothing to hide the glaring weaknesses of Pakistan. 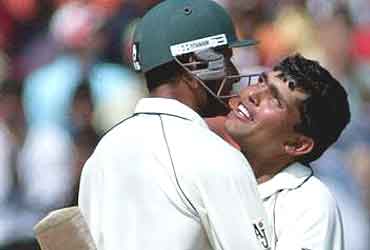 It is time for all good men to come to the aid of sanity. Last week, Reverse Swing’s was a very feeble voice saying that the Pakistan team was not a bunch of pushovers. The cacophony of opinion then was writing them off as lambs for the slaughter.

Now, the din has moved to the other extreme. This Pakistan team, on the strength of its performance on the fifth day at Mohali, is supposed to have become a supremely resilient fighting unit. India, have moved from being the overwhelming favourite to a team struggling to save face at home. John Wright is talking about a lack of killer instinct in the Indian team. Dinesh Kaarthick has made Kamran Akmal his role model. History is being touted as another factor in Pakistan’s favour – they have never lost a Test at the Eden Gardens, winning one and drawing four.

The fact is that nothing much has changed. It is just the way it was before Mohali. India remain the better of the two teams. The Pakistanis remain capable of presenting a stiff challenge.

The Mohali Test ended in glory for Pakistan. But the preceding four days were very much a romp for India. Ganguly’s was clearly the better team. The draw was salvaged purely because Kamran Akmal played the innings of his life and so did Abdul Razzaq. And these two sterling performances can do nothing to hide the glaring weaknesses of Pakistan.

Great teams are built around strong opening pairs. Pakistan’s batting in Mohali really started once the first three wickets had fallen (2 for 30 in the first innings and 3 for 10 in the second). Most batsmen struggle when they cannot figure out where their off-stump is. Salman Butt, in the second innings, did not know where his bat was. Taufeeq Umer did not look the part. And the selectors have been cruel to Younis Khan in making him the vice-captain.

Pakistan’s pace attack remains weak. Both Mohammed Sami and Rana Naved-ul Hasan will have to do a lot more of what they did only in patches on the third and fourth day. Danish Kaneria did take six wickets, but to be fair, he had to take them for about 70-75 runs less to be called a destructive bowler. In fact, the most heartening outcome of Mohali for Pakistan – it is something that people are forgetting already – was yet another proof of Asim Kamal’s undoubted talent, unwavering temperament and undying resolve.

India, on the other hand, are sitting pretty. After a long time, not only the eleven but the fourteen is fighting fit and in form. Their biggest problem in recent years, the opening pair, was not a problem in Mohali. A left-right combination of two aggressive fast-scoring batsmen makes for a happy situation. Sachin Tendulkar showed no sign of the tennis elbow. Lakshmipathy Balaji has come back a better bowler. Rahul Dravid and V.V.S. Laxman are in good nick.

All India have to do is merely maintain their level at the Eden and the Pakistan team will be again required to perform out of its skin. And that may not be possible on a fifth day Eden pitch. As for history, this will be Pakistan’s second Test in Kolkata in some 20 years. And this match is not being played in the past.

'My Aim Is To Be A Good Driver'