The Muslim world with two of its countries—Iraq and Afghanistan— directly occupied by Western troops does not need to be reminded of the language of the Crusades. Violence was and is not the prerogative of any single religion as the continuing Israel 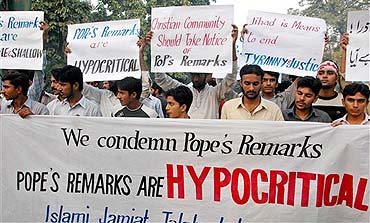 Was Benedict's most recent provocation accidental or deliberate? The Bavarian is a razor-sharp reactionary cleric. A man who organises his own succession to the Papacy with a ruthless purge of potential dissidents and supervises the selection of Cardinals with great care leaves little to chance.

I think he knew what he was saying and why.

Choosing a quote from Manuel II Paleologos, not the most intelligent of the Byzantine rulers, was somewhat disingenuous, especially on the eve of a visit to Turkey. He could have found more effective quotes and closer to home. Perhaps it was his unique tribute to Oriana Fallaci.

The Muslim world with two of its countries—Iraq and Afghanistan—directly occupied by Western troops does not need to be reminded of the language of the Crusades. In a neo-liberal world suffering from environmental degradation, poverty, hunger, repression, a 'planet of slums' (in the graphic phrase of Mike Davis), the Pope chooses to insult the founder of a rival faith.

The reaction in the Muslim world was predictable, but depressingly insufficient. Islamic civilization cannot be reduced to the power of the sword. It was the vital bridge between the Ancient world and the European Renaissance. It was the Catholic Church that declared War on Islam in the Iberian Peninsula and Sicily. Mass expulsions, killings, forced conversions and a vicious Inquisition to police the cleansed Europe and the reformist Protestant enemy.

The fury against 'heretics' led to the burning of Cathar villages in Southern France. Jews and Protestants alike were granted refuge by the Ottoman Empire, a refuge they would have been denied had Istanbul remained Constantinople. 'Slaves, obey your human masters. For Christ is the real master you serve' said Paul (Colossians 3: 22-24) in establishing a collaborationist tradition which fell on its knees before wealth and power and which reached its apogee during the Second World War where the leadership of the Church collaborated with fascism and did not speak up against the judeocide or the butchery on the Eastern Front. Islam does not need pacifist lessons from this Church.

Violence was and is not the prerogative of any single religion as the continuing Israeli occupation of Palestine demonstrates. During the Cold War the Vatican, with rare exceptions, supported the imperial wars. Both sides were blessed during the First and Second World wars; the US Cardinal Spellman was a leading warrior in the battles to destroy Communism during the Korean and Vietnam wars. The Vatican later punished the liberation theologists and peasant-priests in Latin America. Some were excommunicated.

Not all Christians joined in the crusades old and new. When Pope Urban launched the crusades the Norman king of Sicily refused to send troops in which Sicilian Muslims would be compelled to fight against Muslims in the East. His son, Roger II, refused to back the Second Crusade. In doing so they showed more courage than the leaders of contemporary Italy, who are only too willing to join the imperial crusades against the Muslim world.

'To make sure of being right in all things', said the founder of the Jesuits, Ignatius Loyola, 'we ought always to hold to the principle that the white I see I should believe to be black if the hierarchical church were so to rule.'

Today most Catholic prelates in the West (including the Bavarian in the Vatican) and politicians of Centre-Left/Right worship the real Pope who lives in the White House and tells them when black is white.

One More For Ripley's Believe It Or Not!