From largely a bowlers' script in this Champions Trophy, the final could be a nice deviation. 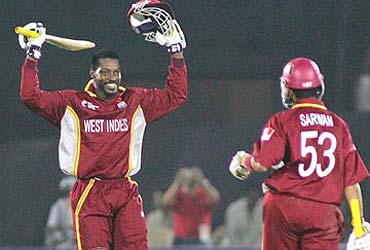 The West Indies have mostly played their cards in the Champions Trophy well, including the manner in which they avoided Mohali and kept themselves in Mumbai, Ahmedabad and Jaipur. They would now start the final against Australia on more or less even terms.

I say so because the West Indies have probably batted the best in this competition. They have three centuries while the rest have none. In their last two matches, they have looked good for 300-plus totals. They have worked on the age-old classic that it is the top order which gets you the most on the board. Not bad for a team which was out for 80-odd in the qualifier.

The mantra against Australia would be to deny them early wickets and you could have a game on.

Chris Gayle, to my mind, played one of the best one-day knocks. It could have been easy to get intimidated by the South African quicks but this Jamaican now backs himself to the hilt.

Just linking his performance in India in 2002 to the present one probably indicates that this is his garden of Eden. He gave a lesson in patience to all those who thump their chest and call themselves only explosive stroke players. You cannot be an opener and be happy with 30s and 40s. He now wants to be known as a batsman who only waits for bad balls.

It is a heady cocktail which would serve the West Indies at the World Cup and beyond. He truly has come of age.

Gayle and Ian Bradshaw are the names which flash first to mind while discussing the West Indian resurgence. But then you remember Brian Lara and Runako Morton, the trick guy Jerome Taylor and Dwayne Bravo and even Marlon Samuels, whose boundary against India is probably the reason why the West Indies have come so far.

They unfailingly bowled tight and gave little away in the field. It has variety and versatility; experience and youth. What else do you need in a team? And remember, one of their best bowlers Corey Collymore hardly played!

Still Graeme Smith's option to bat first would probably haunt him for a long time. He wrongly presumed his tall fast bowlers would derive pace and bounce, if not movement, from the docile surface. If anything, the slowness of the pitch was neutralised by the dew in the evening.

Australia, on the other hand, are still worried about the options they have for a docile pitch. Their all-pace attack, like the one of South Africa, could have their teeth drawn on an unresponsive pitch as Jacob Oram and Daniel Vettori so ably showed in Mohali.

They would be worried if Mumbai would be as much a home to the West Indies as Jaipur was. They only set off the West Indies resurgence in Mumbai and would fear if the pinnacle too would come at their expense.

Australia have just been adequately, and not exceptionally, served by its batsmen. Nobody has kicked on to play a big knock even though 40s and 50s and little cameos have abounded.

They also have lacked a whizzing finish and hence acceleration has not come in the final overs. And don't forget playing in Mohali must have been like playing in there own backyard. The Brabourne could be a little different.

Where Australia have gained is in Glenn McGrath's return to the blocks. The Pigeon is ready to fly and is only going to be better, the vagaries of pitches notwithstanding. If taking away the new ball from him was a trick, it worked to a plan.

I also believe Nathan Bracken has been one of the better users of new ball in this tournament. When you consider that it is impossible to take the new ball out of Brett Lee's hands with his pace, bounce, movement and naked hostility, Australia have formidable bowling wolves at the front. They would be hot in pursuit and it would be difficult to keep them at bay.

Lee and Bracken are also two top wicket-getters this year and have made life difficult for batsmen.

The final could well be a batting slugfest. A nice deviation from largely a bowlers' script in this Champions Trophy.