With 406 runs required on the final day and seven wickets in hand, an embarrassing 1-4 series defeat looks imminent for India as of now. 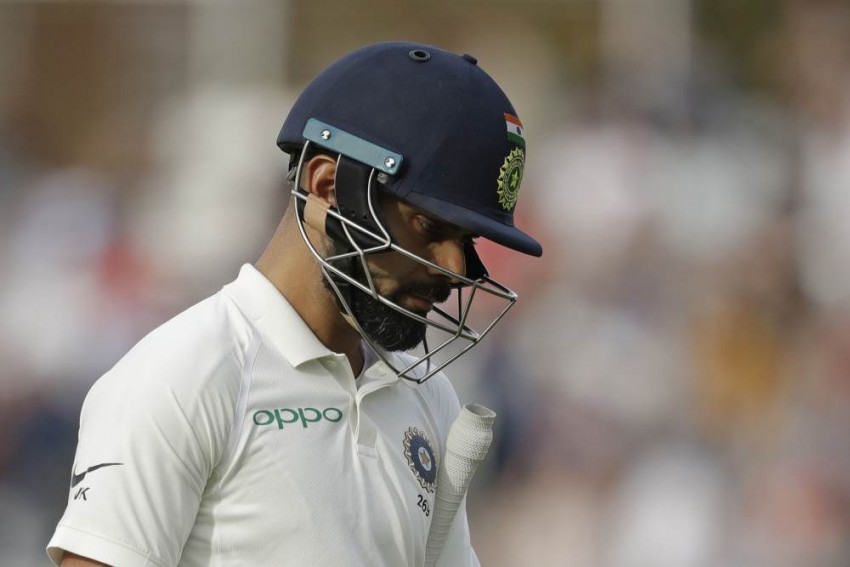 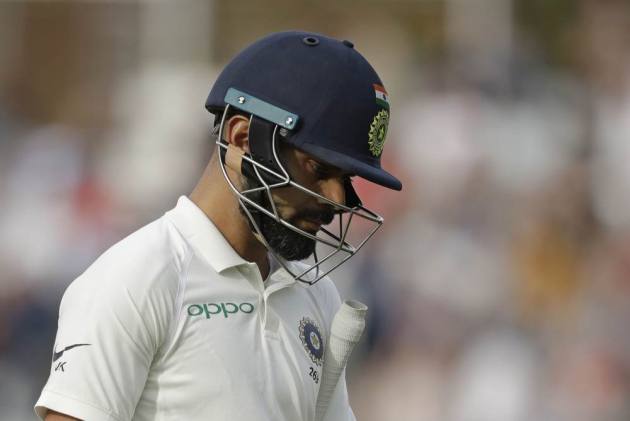 Having already lost the Pataudi Trophy, India faced yet another defeat with England piling more misery on the Virat Kohli-led team on the penultimate day of the fifth Test at The Oval Monday.

Batting for one last time, Alastair Cook made dogged 147 off 286 balls in his final knock while skipper Joe Root roared back to form with a stylish 125, his first hundred in 28 innings, as the duo grinded the Indian bowling into submission with 259-run stand.

Courtesy the twin hundreds by the former and current skipper, England declared their second innings on 423/8 with a massive target of 464 for the Indians.

Deflated after fielding for over 112 overs, India's wobbly top-order once again faltered with Shikhar Dhawan (1), Cheteshwar Pujara (0) and Virat Kohli (0) dismissed in quick succession with day end score being 58 for 3

With 406 runs required on the final day and seven wickets in hand, an embarrassing 1-4 series defeat looks imminent for India as of now.

The wily Jimmy Anderson (2/23) equalled Glenn McGrath's 563 Test wickets and is expected to break the record on Tuesday while Stuart Broad (1/17) with 433 wickets is just one short of Kapil Dev's (434 wickets).

Dhawan's poor technique was once again exposed as he was adjudged plumb leg before to an incoming delivery from Anderson. Ditto for Pujara, who got a sharp incutter that breached his defence. He wanted a DRS but was late in appealing for one.

Skipper Virat Kohli, after a tremendous English summer where he scored 593 runs, finally got out for a duck as he nicked one off Broad to Jonny Bairstow, leaving India in tatters.

However, the day certainly belonged to Cook, who scored his 33rd hundred his last appearance to join a select band of players having scored a hundred on debut and final Test. He is fifth in the list after Reginal Duff, Bill Ponsford, Greg Chappell and Mohammed Azharuddin.

His 286-ball knock had 14 boundaries and it certainly overshadowed Cook's 190 ball effort that had 12 fours and a six. Their partnership literally killed the contest after Ishant Sharma's ankle injury had pegged India further back.

In the post lunch session, the duo looked to build on their partnership and further frustrate the Indian bowlers, bringing up their 200-stand off 303 balls.

Root, on 94, got a second life as Cheteshwar Pujara dropped him at first slip off Mohammed Shami (2-97) in the 77th over. He then went on to score his 14th Test hundred off 151 balls.

Thereafter, Root started attacking as England crossed 300 in the 88th over. India were a bowler short with Ishant leaving the field due to ankle pain.

Hanuma Vihari (3/37) struck twice in the 95th over. First, Root holed out and then Cook was caught behind, with the opener walking off to a standing ovation as well as congratulatory handshakes from the Indian team.

Shami then got reward as Jonny Bairstow (18) played on and Ravindra Jadeja (2-147) removed Jos Buttler for a duck as England looked to score some quick runs in sight of a declaration.

Earlier, Cook's hundred helped England reach 243-2 at lunch. Starting from overnight 114-2, first up he reached his half-century off 127 balls.

He and Root continued to plunder runs at an easy pace as 55 runs came in the first hour of play, and 129 runs overall in this morning session, the best of this fifth Test.

In doing so, the duo raised their 100-partnership off 171 balls as Cook started breaking records. First, on 76, he went past Kumar Sangakkara as the highest-scoring left-handed batsman in Test cricket history, and will finish as the fifth-highest run-scorer overall after Sachin Tendulkar, Ricky Ponting, Jacques Kallis and Rahul Dravid.

Meanwhile, at the other end, Root scored his half-century off 81 balls as England crossed 200 in the 63rd over. He had been dropped at slip by Ajinkya Rahane, on 46, off Jadeja in the 56th over.

The big moment then came in the 70th over of this innings as an overthrow from Jasprit Bumrah (0-61) gave Cook his 33rd Test century off 210 balls, surpassing Australia's Steve Waugh (32).

Further, this was his seventh Test hundred against India, more than any other English batsman, ahead of Kevin Pietersen’s six hundreds. He is now also the second-highest run-scorer in Test cricket after Ponting (2555 runs).

With 15 hundreds in second innings in Test cricket, he also over took Sangakkara (14 hundreds).

India seemed to have gone off the boil especially with one strike bowler short, as the duo ground them for runs.