The ironies in life make it all the more intriguing. That seems to ring true for a stellar event like the F1 finals too, as the Yas Marina Circuit delivered its final twists on Sunday, keeping some happy, some a tad disappointed but all on their toes till the very end! 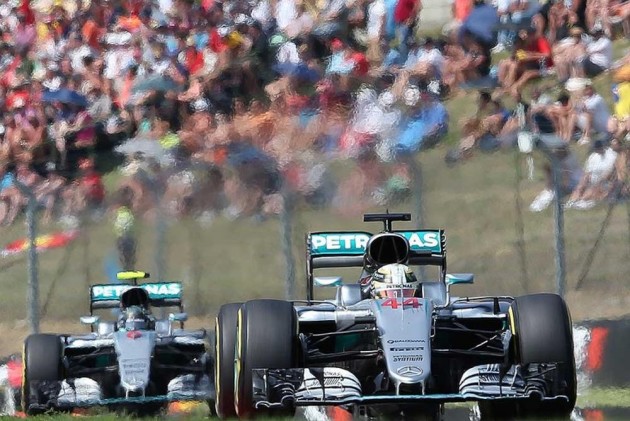 The ironies in life make it all the more intriguing. That seems to ring true for a stellar event like the F1 finals too, as Yas Marina Circuit delivered its final twists on Sunday, keeping some happy, some a tad disappointed but all on their toes till the end!

Drama is inevitable, when the showdown for the grand prize involves the duo that have won 19 out of 21 races in the 2016 Formula 1 season between them. It didn’t matter they raced for the same team, or that they were boyhood pals. This is the kind of situation when one would forge an invisible pact with one’s formidable enemies (still less threatening than the rival in the camp!). As Hamilton tried to hold back Rosberg’s racing line, leaving him to play the monkey-in-the-middle to Vettel and Verstappen who were hot on their heels, it was all fair play in a display of masterful racing strategy. Hamilton succeeded in slowing him down by going conspicuously slower himself, but as Rosberg held off the bullies, his otherwise equivocal claim to the title gathered some merit.

It was 12 points that separated Lewis Hamilton and Nico Rosberg on Sunday. At the end of the day, it was just five, and the world championship title! Well, the irony is when you end up losing the Grand Prix to the one who is trailing by podium count and race-wins but is ahead of you on the leaderboard, because he was runner-up on more occasions. Lewis had 17 podiums and 10 wins, while Nico had one less of both; yet Nico Rosberg had 385 points and Lewis Hamilton 380. Now, that is the point in a Grand Prix, where it is ultimately about the ‘grand prize’!

While five is a narrow margin, it doesn’t add much drama in Hamilton’s case. We shouldn’t forget that it was one point that determined his destiny when he lost to Kimi Raikkonen in 2007 and denied Felipe Massa the title the very next year. On the other hand, Hamilton has also recorded three of the most convincing ascents to the podium – with 11 race wins in the 2014 season, and 10 each in the following years.

The dual act from the Mercedes stable almost had the 2016 season all to themselves. If anything, the start of the series was prognostic with Rosberg winning the first four in an otherwise evenly dominated series. Hamilton prevailed in the final four. On the track, ‘turn in late’ is golden advice. But Hamilton’s luck turned in too late!

There is more to pick on their trail of irony. While the Briton was able to hold his head high in his homestead, the German hero disappointed his home crowd by failing to make the podium in Hockenheimring. Spain’s was the only race in which both the racers missed the podium, because Hamilton crashed out of the race, taking his own teammate along for company – talk about irony of the pathetic kind!

Sorting through the paradoxes, there are positives that emerge from the Formula 1 Grand Prix 2016. By winning the Abu Dhabi GP, Hamilton brought back the faith in fighting for the pole position at Yas Marina. Only two drivers on pole position had won out of the 7 races so far held there. Now, the odds have almost been evened out with 3 wins out of 8.

If victory is directly related to perseverance, then Nico’s recent record seems to take the irony out of his victory. After spending a whole decade in Formula 1, he has surely worked his way up to be clawing at the heels of the champion he has finally beaten after sharing two consecutive podiums.

Some might still argue that the margin is too thin to be convincing. Then again, there are scores to be settled and podiums to be celebrated.

Well, going by what I heard Jenson Button say of his own experience as the 2009 champion, winning the Grand Prix (race) is emotional, “it’s like living in the moment” at the end of 55 intensely fought laps. As for the series champion, he is not going to wake up the next day and think he won only 9 races only, but that he is the world champion! The debate can continue, but nobody can take that away from Nico Rosberg.

The reference to Button also brings up the greatest irony in Sunday’s finale. It was the way Jenson Button said goodbye to the F1 track – or to be more correct, it was the other way round. Talking to the small bunch of us at the party hosted by sponsor Hilton on race day eve, Jenson casually mentioned what he was looking forward to the next day. “The points don’t actually mean anything to the team or to me. The important thing tomorrow is to have fun! And we get to enjoy the race… and do some really big burnouts at the end!” He hoped Massa would join him in the burnouts.

Massa did the donuts, but Jenson had to finish his career with a Did Not Finish entry in his very final F1 race. And that too, during his 12th lap at a time when he was faring rather well at No. 9 in one of the most aggressive and exciting finals in F1.

Life doesn’t always give you those last donuts, even if you’ve been a good boy all along!

Sudeep Koshy is one of the world’s leading motoring bloggers. You can read more from him at drivemeonline.com