popular habitats of the great Indian one-horned rhinoceros, the Kaziranga National Park. The anticipation of spotting this great animal up close enlivens the otherwise peaceful drive to the park from Jorhat on the NH37. The highway is flanked by dense forests on one side and verdant tea plantations on the other. Kohora is the base most visitors make a beeline towards, but even before one reaches this gateway into Kaziranga, it becomes clear that this entire area is rhino territory. In fact, it is quite possible to spot a stray rhino grazing on the side of the road even before entering the park limits.

Men from nearby villages can often be found ambling by the pavement with binoculars hanging around their necks, which they offer on rent to the occasional tourist who stops to have a closer look. This unexpected sighting heightens the excitement and leaves visitors craving for more such eventualities within the park.

A great Indian rhinoceros with her calf

Locals claim that before the inception of the park in the early 1900s there were very few rhinos inhabiting these grasslands. The story goes that when Mary Curzon, wife of the then Viceroy of India Lord George Curzon, visited the area, all she managed to spot were three-toed hoof prints. It was her persuasion that led Lord Curzon to declare Kaziranga a reserve forest on 3 January, 1908 with an area of approx 400sq km. That opened the floodgates for attempts for the park’s conservation. Subsequently, the reserve forest was further expanded to include another 13,509 acres. On 10 November 1908, Kaziranga was declared a Game Sanctuary, but excessive hunting led to depletion of the park’s species. In 1938 the then Conservator of Forest, AJW Milroy stopped gaming of all sorts and opened the sanctuary to visitors. After independence, on 11 February 1974, Kaziranga was converted into a national park and more recently in August 2007, it was also declared a Tiger Reserve.

The great Indian one-horned rhinoceros may be the greatest attraction of Kaziranga but it also has the highest density of tigers amongst all protected areas of the world. Unlike the rhino, however, the Royal Bengal tiger is harder to spot amidst the thick undergrowth. Along with these two prized animals, the national park is also home to the elephant, Indian bison, sambar, leopard, hog deer, sloth bear and hoolock gibbon. Avian species found here include pelican, rose-ringed parakeet, serpent eagle, Bengal florican, bar-headed geese, whistling teal and red jungle fowl.

Kaziranga, in the language of the Karbi tribe, means ‘where the moun-tain goat has water’. Flat grasslands with streams and large, landlocked water bodies (beels) constitute Kaziranga’s terrain. Tall elephant grass covers most of the land, sometimes opening into foraging grounds with shorter grasses, a few tall trees and cane thickets. The low-lying terrain naturally rises southwards into the Karbi Hills; the transitional high woodlands were earlier a crucial part of this forest, offering safe ground to animals during the annual flood.

Almost every year in the monsoon, Kaziranga is submerged by the backflow of the Brahmaputra in spate – this flood helps rejuvenate the forest, recharges the wetlands with fish stock, clears hyacinth and other debris, and brings in silt to give the grassland new life. However, some-times when the flood level rises drastically (as it did in 1998 and also in 2004), there is widespread loss of wildlife as animals cannot get to high ground fast enough. Yet, the yearly monsoon flood is a natural cycle from which Kaziranga rises resilient, phoenix-like, every time.

Declared a World Heritage Site by UNESCO in 1985, Kaziranga is inter-nationally acknowledged for its importance as one of the last undisturbed habitats of the great Indian rhinoceros. Thanks to conservation efforts, today there are over 1,500 rhinos in Kaziranga. It is also home to over 70 per cent of the world’s swamp or wild buffalo population. The rare swamp deer is also found in plenty here. According to a recent census, Kaziranga sustains over a 1,000 wild elephants and 450 species of wetland, grassland and woodland birds, of which 18 are globally threatened. The huge number of rhinos in Kaziranga is actually worrying conservationists, who feel that an epidemic could wipe out the entire population. They suggest that some of the rhinos be moved to other parts of Assam.

A monitor lizard sunning itself

Kaziranga spreads over 480sq km; it stretches east to west with the Brahmaputra as its northern boundary, and is fringed by the Karbi Hills in the south. The south of the park is very easily accessible as NH37 runs right through it. This area has many villages, fields and vast tracts of tea estates; in fact, all the tourist entries into the park are past villages and fields. Kaziranga National Park is demarcated into three main tourist ranges – Kohora, Baghori and Agaratoli. All these routes wind through the southern sector of the park, which teems with wildlife. Kohora (Tel: 03776-262428) is the central range, and most tourist facilities and park entry formalities are based here. Early morning elephant rides begin from Kohora every tourist season (these have recently been introduced at Baghori as well), offering people a close-up feel of the grassland at dawn – rhino sightings are almost assured on these rides. Forest Department jeeps are hard to come by for a jungle safari so it is advisable to hire a vehicle from the chowk at Kohora. This might prove to be cheaper than hiring one from your hotel. The latter’s charges will be around ₹4,200 for the whole day or ₹1,900 for Kohora, ₹2,100 for Baghori, ₹2,300 for Agaratoli and ₹500–600 to go to Panbari.

Tip You are not allowed to travel on foot in Kaziranga. Guides can also be hired from established hotels and they usually carry binoculars. In any case, it is best to have your own. It’s also important to have a personal survival kit, comprising a torch, medicines and toiletries

A baby elephant follows its mother on a safari

There are three tourist routes that you can opt for inside Kaziranga. Both jeep and elephant safaris are possible here. A safari assures you a glimpse of the spectacular wildlife.

The jeep and elephant safaris are a must in Kaziranga. In the right season, you can spot many animals in just two days. As Forest Department vehicles are generally not available for tourists, jeeps can be hired at the Kohora Chowk or arranged through your hotel. Safari timings are monitored strictly by the Forest Department.

The longest of the tourist routes, a three to four-hour safari in this range offers almost a complete sense of Kaziranga and its wildlife. You may see rhinos, elephants and wild buffalos. Huge ficus trees laden with fruit in season often have majestic pied hornbills feeding on them; owls, and serpent and fishing eagles peer through wooded stretches, monitor lizards blend into tree trunks, and sometimes elephants and rhinos lurk in the tall grass.

The northern end of this route runs along a rivulet through a wooded stretch – here turtles of various sizes sun themselves on branches lodged in the water, otters frolic in a pond fringed with sunlit cane fronds, and if you look closely into the trees, you can catch colourful minivets darting between branches. The unusual khaleej pheasant or the vibrant jungle fowl could suddenly dart through the undergrowth. The large beels here offer different sights in different seasons.

In winter, there are grey-lag geese feeding furiously and calling in unison as they take off in majestic flight, only to resettle a little distance away. Catching elephants at play in these beels is about the most rewarding experience in Kaziranga. Tiger sightings are uncommon, but there are stories of the occasional visitor who, on a typical spin around the park, came back with the rare trophy that eludes the most dogged wildlife enthusiasts – a tiger sighting in Kaziranga!

Almost every afternoon, the domestic elephants at the Mihimukh Camp (which is located at the beginning of the Kohora circuit) are given a bath in the nearby stream.

This is in the western end of the park. This circuit is known for guaranteeing sightings and its strategic watchtower. An evening trip on this route is almost always a gift for the wildlife tourist – shrikes prance about on burnished grass stalks and herds of elephants graze within clear viewing distance. Head to the watchtower before sunset to take in the view of the large clearing beyond the water, bathed in a golden light. You might be lucky enough to spot swamp deer, rhinos, and even some elephants.

This is the easternmost of the three routes and is 21km from the Kohora Base. This range is more wooded than the other two and animal sightings are slightly less frequent. Birds are abundant along this route. Forest guards report tiger sightings here quite often and there’s a pelican colony towards the end of the circuit.

A lesser-known fact about Kaziranga National Park is that it is also a birdwatcher’s paradise. It is second only to Corbett National Park in the diversity of bird population that is found here.

There are over 450 species of birds here, with the usual wetland resi-dent and migratory varieties. The endangered Bengal florican, the pied hornbill, raptor and owl species can all be sighted in Kaziranga National Park.

Accommodation at IORA The Retreat

Accommodation at IORA The Retreat

Near the Bagori Police Outpost lies Diphlu River Lodge (Cell: 09207042330/ 31; Tariff: ₹9,000 per person, with meals) by the picturesque Diphlu river. The rooms are spacious and comfortable. The food that is served here includes Chinese, Assamese and north Indian.

All the hotels listed here have restaurants.

When to go November–early April. Best sightings end of March to early April

Location This national park is spread over Golaghat, Nagaon and Sonitpur districts

Route from Jorhat NH37 via Sokholatinga and Rajabari

Air Nearest airports: Rowriah Airport at Jorhat (88km/ 2hrs), connected to Kolkata and Guwahati by Jet Airways. But arrival is after 1.00pm, so you can’t plan safaris the same day. Taxi costs about ₹2,500. Guwahati (215km/ 5hrs) is convenient for visitors from Delhi and Mumbai. Catch a morning flight if you want to do a safari the same day. Car hire to Kaziranga is about ₹4,000 for a drop. Resorts also arrange pick-ups

Road From Guwahati, take the well-maintained NH37 to Kaziranga NP via Dispur, Nagaon, Jakhalabandha and Hathikhuli. Jorhat is further ahead on NH37 Bus State as well as private buses, leaving from ISBT, Guhawati for Upper Assam stop on the way at Kohora

Diphlu River Lodge: Enjoy The Call of the Wild In Assam 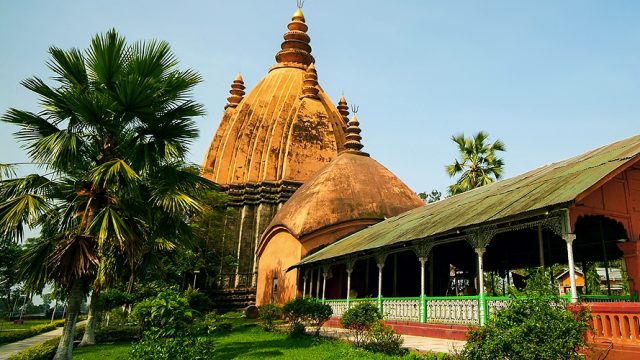 Do a heritage tour of Assam to learn about the state’s glorious past, strong culture and history. Here’s our round-up of Assam’s best heritage 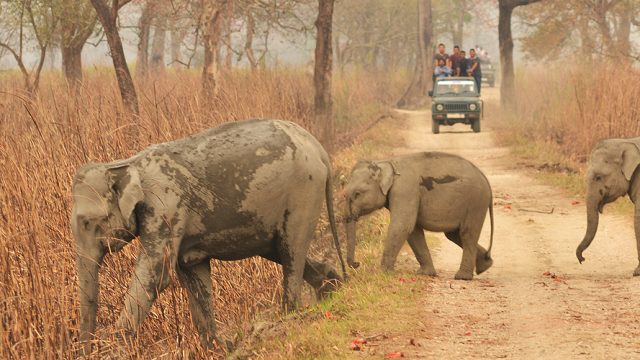 From dense forest to rare and endemic flora and fauna, these national parks in Assam give the Indian wildlife scene a touch of unique and a reason to be on your wildlife bucket list