Lothal is located between the Sabarmati River and its tributary Bhogavo, in the Saurasthra region.

The sea is today over 19km away from Lothal, but at one time, boats from the Gulf of Cambay could have sailed right up to the spot. Exploration of the Sabarmati Valley in the mid-1950s led to the discovery of Lothal and several other Harappan sites, thereby adding a new province to the extent of the Indus Valley Civilisation. Excavation was carried out at Lothal between 1955 and 1962, after which the site as well as the on-site museum were set up for tourists.

Things to See & Do
The car drive to Lothal will seem like you’re heading to the middle of nowhere, and it is indeed hard to grasp what a crucial role Lothal has played in the history of the subcontinent, having connected the region to glorious and admittedly more popular civilisations westwards, such as those of Mesopotamia and Egypt. Archaeologists have dated this site to as far back as 2450 BCE, wit the Harappan period ending around 1900 BCE, transitioning into what is known as a ‘Red Ware Culture’ in 1300 BC.

The modest-sized settlement was roughly rectangular in plan, surrounded by a wall that was initially made of mud and later of burnt bricks as well. There was a burial ground in the northwest section of the settlement, outside the enclosing walls. The main citadel included an elevated area where you can now see remains of residential buildings, streets, bathing pavements and drains. Walk around the complex to admire the surviving structures.

Lothal would have been an important part of the Harappan civilisation not only for its rich cotton and rice-growing areas, but also for its bead-making industry. The beads and semi-precious stones found in Lothal attest to a great level of artisanal skill, and many of these beads have been found in Mesopotamia, evidence of robust trade. Over time, a neatly planned town-ship was constructed, a quintessential feature of the Mature Harappan phase, along with a dock for ships. Though only a small portion is now visible, the original town was divided into several blocks of one or two metre-high platforms made of sun-dried bricks. These platforms served as common plinths for a group of 20 to 30 houses, and a mud-brick wall of 13-m-thickness gave protection against floods. Some of the houses in the main area were quite large, with four to six rooms, bathrooms, a large courtyard and a verandah.

The unique characteristic of urban Harappan settlements is in the division of the city into a citadel or “Upper Town” and a “Lower Town”. It is assumed that social differentiation existed in Harappan society, and that the ruling class would have lived in the Upper Town, where the houses included paved bathing spaces, underground drains and a well for potable water. But the Lower Town was also equipped with crucial civic amen-ities. In fact, drainage and water facilities in the Harappan civilisation are stunning examples of early urbanisation in the Indian Subcontinent. The streets would have been paved with mud-brick, and gravel. Houses belonging to artisans such as coppersmiths and beadmakers have been identified on the basis of the presence of brick kilns, raw materials and artefacts.

The most distinctive feature of Lothal is the dockyard, which is on the eastern edge of the site. The structure’s design shows a clear understanding by its architects of tides, hydraulics and the effect of sea water on bricks. The mechanisms of the dockyard are truly impressive for its time, with provisions for maintaining a regular level of water by means of a sluice gate and a spill channel. There is a mud-brick platform on the western embankment that may have been where goods would have been loaded and unloaded.

Archaeological ruins of the Harappan Civilisation

The piecemeal discovery of Harappa and Mohenjodaro, in present-day Pakistan, during the first half of the twentieth century, led to the discovery of an extremely important and exciting part of the Indian subcontinent’s past. The count of Harappan sites is over 1,000, of which over 400 are found in present-day Pakistan and 600 in India. However, the number of these sites that have been excavated and analysed is woefully low. It is important to note that the geographical area covered by the Harappan culture zone is expansive, with some sites found in Afghanistan, in the Punjab, Sindh, Baluchistan and Northwest Frontier Province of Pakistan, in Jammu, Punjab, Haryana, Uttar Pradesh, Rajasthan and Gujarat in India. In Gujarat, two of the most prominent sites are Lothal and Dholavira. The Harappan culture is into three phrases – the early Harappan, mature Harappan and late Harappan. The early phase was the formative one, with the beginnings of urbanisation; the mature phase was the urban, full-fledged civilisation-mode phase, while the late Harappan was the post-urban phase, when the cities declined.

The civilisation was South Asia’s first urban culture. Archaeological evidence has shown us a great deal about the civilisation, such as its vibrant craft traditions, urban planning and extensive trade networks, but many lacunae in knowledge still exist, not least the non-decipherment of the Indus script.

Archaeological Museum
Set up in 1976, this museum hosts a large display of artefacts found during the excavations. You can also look at archaeologists’ conjectural plans for the town, including the bead factory, and the original expanse of the dockyard. Displays include terracotta ornaments, beads, seal replicas, shell, ivory, copper and bronze objects, figurines repres-enting animals and humans, painted pottery, as well as objects recovered from burials in the cemetery site. One of the most fascinating finds in Lothal was a burial of two people together in a brick-lined grave; a replica of the same can also be seen in the museum.

When to go All year round, but October–February is most pleasant

Rail Ahmedabad Junction is connected to most cities in India including Delhi, Mumbai, Bengaluru, Kolkata, Pune, Indore, Jaipur, Jammu, Chennai, Goa, Kozhikode and Kochi through Shatabdis, Rajdhanis and express trains. It is also well connected with major cities in Gujarat by daily passenger and express train services. Taxi as above 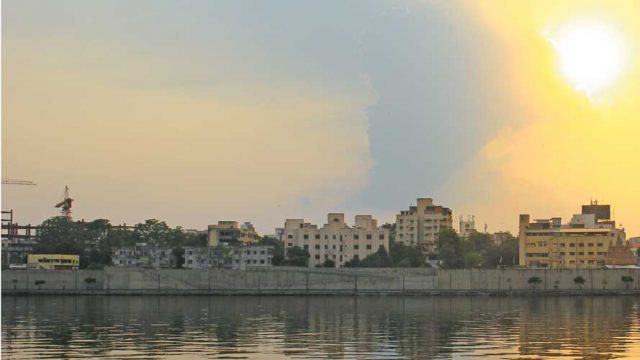