Gazing at a quiet peaceful meadow, while sitting next to the ever so still mountains

under a motionless mottled sky must be the closest one can ever be to heaven. Auli, a tiny picturesque town situated in Uttarakhand makes you feel just the same way. This ethereal place, which is now the best ski destination in India, was hardly known until the state of Uttarakhand was carved out of Uttar Pradesh in the year 2000. Afterwards, Auli was promoted as a tourist destination much to the delight of all.

Situated at an altitude of 2,500–3,050m, Auli offers views off some of India’s highest peaks including the Nanda Devi (7,816m). The panoramic views of these spectacular snow-capped moun-tains, that you get to witness here, are simply breathtaking. Auli is a gateway to the Nanda Devi and the Valley of Flowers National Park. The national park is home to a multitude of species. Animals such as the snow leopard, Himalayan bear and musk deer can be found here. Apart from the diverse range of flora and fauna, the national park is a climber’s treat. The Nanda Devi and Valley of Flowers National Park consist more than 20 peaks and 40 trekking routes. The ITBP (Indo-Tibetan Border Force) has a training facility at Auli and there are many soldiers posted higher above in the national park region as the area is close to the border with China. Famous trekking destinations such as Kuari Pass, Pangerchulla Summit, Tapovan, etc. can all be accessed through Auli.

Skiiers gathered atop a slope

To reach Auli, one needs to either hire a cab or use the ropeway. The ropeway that starts from Joshimath is Asia’s second longest ropeway and arguably the most beautiful one. The ropeway gains an elevation of 1,100m in about 15 minutes. Soaring above the high mountains, you can see a large number of people skiing their way down the slopes in different areas depending on their skill level. One can also see a large man-made lake, which when frozen becomes suitable for ice skating.

Other than the cable car there is also a chairlift and a ski lift. The cable car is an enclosed arrangement, whereas the chairlift is an open arrangement in which you are seated with your legs hanging mid-air. It’s an adventurous beautiful experience and anyone can do it as it doesn’t require any skill or physical effort.

I was still a student when I went skiing in Auli. I found it more exciting to pack my bags and travel around the country whenever I got a few holidays, instead of undertaking the 1,000-km long journey back home. I’m more of a mountain person and love to trek whenever I can. But this time, I wanted to try something different; so after long hours of planning I set out with a friend on a road trip to Auli – the skiers’ paradise.

None of us had ever skied before; probably the only experience of skiing that I had was that at Rohtang Pass in Himachal Pradesh. I was eight years old back then and the only thing I could remember was that of unsuccessfully trying to stand on the skis. Well that was in the past, and I was hoping for a better experience this time around.

Let me be honest – the way I was visualizing myself skiing was no less than any professional. In my head I was skiing down the steepest of slopes at high speeds, making the swiftest turns and braking at will. I was already proud at the thought of it all but the other more sensible side of me was cursing myself for being an optimistic fool.

So we started our road journey on a motorbike from Delhi. We covered a distance of around 500 odd kilometres over a span of two days. The road to Auli is just fine; one can witness landslides through-out the journey from Devprayag to Auli depending on the weather conditions. We went to Auli in the early part of February and the weather was bearable, we did witness few landslides but that was because of unexpected rains.

The last stop by road for us was Joshimath, a road does connect Joshimath to Auli but it is not advisable to take your own vehicle all the way up due to the slippery conditions. It is better to avoid the risk of taking the road. As suggested by the locals, we used the cable car. The cable car runs at fixed intervals and we caught the earliest one to reach the government-run resort there in a mere fifteen minutes. It turned out that we were the only tourists boarding the cable car but what surprised us even more was the fact that we were the only tourists, even in the resort.

The only other people were locals running food stalls, students learning to ski and their instructors. It felt a bit odd at first but then we cherished the fact that we were the only ones here. We found a guy who worked at the GVMN resort and expressed our interest towards skiing. He escorted us to the resort where all the equipment was stored. We were handed over ski boots according to our sizes, ski poles and skis. This is not the complete set of gear that a skier is expected to be wearing but the local instructor found it sufficient enough for us first timers.

The spot where we had to learn skiing was at a distance of only few paces from the resort. Our instructor suggested we wear our ski boots and walk up to the practice spot. As easy as it would sound, it was quite a daunting task. The ski boots must have weighed at least 4kgs each. Now you can imagine how difficult it can get to move uphill with eight extra kilos of weight on you.

The sensible part of me that was cursing the dreamy part of me earlier was now mocking it. My illusions were gradually diminishing and I was getting closer to reality. I was probably as bad as I was as an eight year old. We walked towards the practice area with evident difficulty. We could sense a touch of derision in the looks of the local students who were skiing with great ease. It didn’t affect us though as we were busy sniggering at one another.

We were inducted to the world of skiing with basic techniques – our instructor taught us how to use our skis as brakes and how to use our bodyweight and ski poles to steer around on the snow. All we did for a good hour or so was walk uphill with our skis on and ski downhill up till a certain point where we had to apply brakes. During that one hour all my dreamy instincts were mutilated beyond repair. Amongst the students practicing their ski moves were a few 10-year-old kids. As much I felt tragic upon seeing them wizz past me, I was equally filled with a strong sense of admiration towards them.

The magnificent peaks of the higher Himalayas tower above Auli

After a two-hour-long session, we took a break. We had eggs and Maggi noodles with the most scintillating view ever. The small group of kids sat right next to us. Fascinated that I was, I asked them a few questions. I found out that they were preparing for an annual winter sports event organised by the GMVN. In fact all the students present there were preparing for the various competitive events. There was also a group of ITBP soldiers honing their skills at a steeper and more technical stretch.

To add on to my misery and to lay the last nail in the coffin of the dreamy me, two young lads were snowboarding! That to me was the best of all the activities that were going on there. They were racing past all the skiers at breathtakingly high speeds with the cold whining winds burbling at their ears and snow popping out at each turn or pause. Their magnificence though was directly proportional to the difficulty levels. So without thinking of emulating them, I started practicing whatever little I was taught in my first class.

Due to the lack of time, we could not learn and practice much but whatever we could was amazing. Treading the Himalayas is a dream for most, skiing is upping the levels of that dream. I was fortunate enough to ski the slopes of the most famous skiing destinations of India. Though I couldn’t learn enough, I decided to take an advance skiing course here sometime in the future.

Skiing being a seasonal sport has limited courses. For those really keen on learning professionally, there is a government run course, the dates of which are decided according to the snowfall patterns. It is a 28-day course that is inclusive of all meals, accommodation, ski equipment and coaching. Since there are limited seats it is advisable to enrol a year in advance. The other courses usually run by private operators are 6-day-long and range between ₹12,000–25,000. Thrillophillia and Euttaranchal are two prominent private course operators at Auli.

For those who just love to admire the beauty of the sport, there is an annual winter fest which usually takes place in the month of February. It is a grand event which sees seasoned skiers from India as well as a few European countries. The event takes place over a a period of four days. There are special compe-titions organised for beginners who in most cases are tourists or locals. The villagers exhibit their skills on indigenous wooden skis. There are competitive races at junior and sub-junior levels as well but the highlight of the event is undoubtedly the Slalom race. Slalom is a kind of race in which the skiers have to move at high speeds in a zigzag track defined by obstacles in the form of flags.

With the advent of professional skiing courses, one can expect a larger footfall at Auli over the coming years. The potential that Auli possesses as a global skiing destination is immense. For me the two days of skiing was a priceless experience. I would love to undertake a trip like this year-after-year. A skiing trip to Auli is not a mere adventure activity but a perfect blend of exhilaration, rejuvenation and tranquillity. I went there as an inquisitive person with child-like insouciance, and after the trip I developed a veneration for the might and exquisiteness of the Himalayan mountains here.

Auli has a host of excellent resorts. From the warmth of your room at Cliff Top Club Resort (Cell: 09756813311, 09411107939; Tariff: ₹8,000–12,000), gaze at the 180˚ view of Nanda Devi, Trishul, Kamet, Mana Parvat, Dunagiri, Bethartoli and Neelkanth. The resort, with 38 rooms, is located right on the ski slopes, below Tower 8. Apart from skiing, Cliff Top also organises rock-climbing, nature walks and hikes, jungle camping and indoor games. The resort has a restaurant as well as a café.

Mountain Shepherds, set up by locals from the villages inside the Nanda Devi NP, run Devi Darshan Lodge (Cell: 08191933300, 073511-46424; Tariff: ₹3,600) with 12 rooms near the helipad. Stay here to support low-impact tourism and local communities. They organise skiing, birdwatching, and will take you on some of the best treks within the national park.

Rail Nearest railhead: Haridwar Junc­tion (293km/ 9hrs) is connected to daily Delhi by the Dehradun Shatabdi. Taxi to Joshimath is about ₹5,000

Road Auli is 16km/ 40min from Joshi­math. Buses from Haridwar, Dehradun and Rishikesh to Joshimath leave in the early hours reaching there in about 9–10 hrs. From Joshimath you need to take the 4-km ropeway to the GMVN resort in Auli. Timings 9.00am–5.00pm. Chair car ₹300 (return) 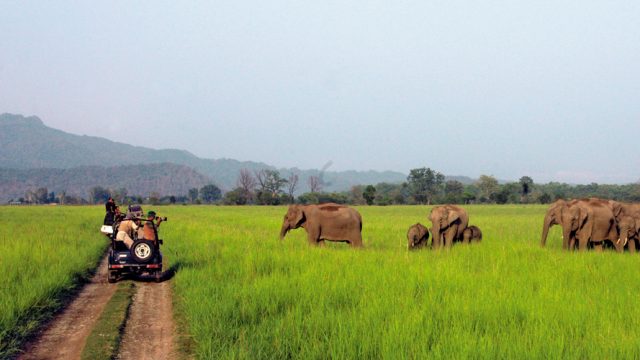 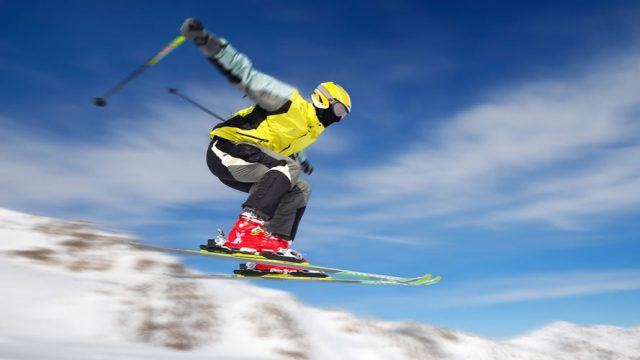 With the long weekend coming up, here’s your chance to make the most of winter