Over a 100 km away from Aurangabad, past the arid topography and volcanic

provinces of the Deccan Plateau, lie the Ajanta Caves – remains of a Buddhist monastic complex of enormous proportions and significant historicity. Once the abode of hundreds of monks, whose quest for truth and learning led them to these mountain halls, today the complex is awash with pilgrims and tourists, who come to bear witness to the greatest example of classical Buddhist art and architecture in the world.

Hidden away from civilization, the caves at Ajanta were constructed to facilitate a peaceful environment for Buddhist monks. Location was key for the monks who wished to remain undiscovered and undisturbed. A horse-shoe-shaped rock scarp overlooking the rippling Waghora River Valley was chiselled to carve out the caves. Indeed, each of the caves is believed to have had its own private access to the river below, by way of a staircase. The steps no longer exist, having been eroded over the millennia. Today, a terraced pathway runs the length of the arena, making it simple for visitors to explore the chronologically labelled caves.

The murals at Ajanta, still aglow after centuries

Historians believe that the caves were built from between 2nd century BCE to 5th century CE, with two distinct periods of construction, separated by several centuries. The first phase started in the 2nd century BCE during the Hinayana era – the earliest phase of Buddhism, and the second was between 460 and 478 CE under the patronage of the Vakataka dynasty. As Buddhism retreated from this part of the world in the 5th century CE, the caves were gradually abandoned. The wild forest that was kept on the fringes now consumed the site and it was lost from memory. They were finally discovered in 1819 by a British cavalry officer, John Smith, who was leading a hunting party in this area, and were quickly accredited as the apogee of Indian Classical art.

It is believed that a total of 30 caves were hewn out of the rock face. Although period of construction is the accepted basis of categorization, functionality also divides the caves into two broad groups. According to the latter, five caves (9, 10, 19, 26 and 29) are chaityagrihas (prayer hall) and the rest are viharas (monastery). Out of these, chaityas 9 and 10, and viharas 8, 12 and 13 belong to the Hinayana phase. The most significant trait of this phase was symbolism, where the Buddha was manifested in the form of a stupa. Despite efforts at preservation, many of the original wall paintings in these caves have not survived. Only some vestiges remain in caves 9 and 10.

The second period of construction was during the Vakataka era. The Vakataka dynasty and their feudatories frequently dedicated or gifted the caves to the monks. This was the busiest period when several caves were constructed and the flourishing complex was mentioned in the writings of Chinese traveller Hieun Tsang. Caves from this era are markedly different in their clear departure from the Hinayana tradition of symbolic depiction. The Buddha statue in all its glorious mudras is ubiquitous in the caves, as are the many scenes from the Jataka (religious canon concerning the incarnations of the Buddha), which are painted ‘dry fresco’ on the walls. This technique involved 3 stages. First the rock surface was prepared by marking grooves and indentations so that it would hold the material applied. Then, clay mixed with various materials such as sand and husk was used to paint the walls, which was topped by a coat of lime wash. Once this surface was completely dry, it was painted on, using natural pigments for colour.

Although the terraced pathway takes you past all the caves, there are some that demand more than a cursory perambulation. Cave 1, a vihara, is one of the largest caves and also one of the most handsomely ornamented. The ground plan is typical, comprising a large hall, inner sanctum with an antechamber and residential cells. The Buddha statue in the sanctum is in the vyakhyana mudra (gesture of explanation) with bodhisattvas (the Buddha in his previous lives) on either side. It is believed that the scene is a representation of the sermon at Sarnath.

Cave 2, also a vihara, is similar to Cave 1, with the addition of two sub-shrines as well as chapels. The doorframes and pillars are elaborately carved and the ceiling is extensively painted.

Cave 4 is the vihara that was left unfinished, but still attracts visitors for its sheer grandeur. It houses a massive Buddha statue in the sanctum.

Cave 9, the oldest chaityagriha, has an apsidal layout. It has a nave, an apse and aisles, which are divided from the main area by a colonnade of 23 pillars. In the centre stands a globular stupa balanced upon a cylindrical base. There are paintings on the pillars and the ceiling, depicting the Buddha.

Caves 16 and 17 are renowned for the most number of tales from the Jataka painted on the walls, while Cave 26 is magnificent owing to its massive representation of the Buddha in the parinirvana mudra (gesture of salvation) and the outstanding statuary that covers every inch of the walls and ceiling.

The historical value of the complex is unprecedented. However, time is gradually catching up and signs of wear are more evident that ever. Even so, the caves of Ajanta are a corpus of art boasting unparalleled magnitude and a visit here is a no-brainer.

Although constantly outshone by its counterpart Ajanta, Ellora still holds a certain appeal to the discerning traveller, as it is one of the largest rock-hewn monastic-temple complexes in the world. Located about 30 odd kms away from Aurangabad, the caves of Ellora were carved out of the step-like formation of volcanic deposits in the Western Ghats. There are 12 Buddhist viharas, 16 Hindu and five Jain temples in Ellora. However, the most astonishing of the lot is Cave 16, renowned as the Kailash Temple – a giant monolithic excavation.

If Ajanta exudes a still, unassailable peace, the Kailash Temple is a celebration of thunderous power, often associated with Lord Shiva. An 8th-century structure, created under the patronage of the Rashtrakuta dynasty, the temple was conceived as the mountain home of Shiva and his consort, Parvati. Kailash is a free-standing monolith carved from the top down, literally brought into being from inanimate mountain rock.

The temple stands tall in a huge court, guarded by two elephants and two ensign staffs. The base plinth is carved with statues of elephants, lions, tigers, Sphinx-like beasts, and dragons with bulging eyes which bear the temple on their backs like a chariot. Sculptures of goddess Lakshmi and two dwarpals (doorkeepers) oversee the entrance. The surrounding two-tiered galleries swarm with 10-ft-high reliefs of the gods.

Statue of Budha flanked by bodhisattvas at Ellora Caves

There was an intense surge of activity in Ellora that began in the 6th century CE and continued for over 500 years. It is interesting to note that the initiation of these establishments in Ellora almost coincides with the abandonment of Ajanta. The Buddhist Caves (1–12), at the southern end, are the oldest, dating back to 500–750 CE.

While the comparisons with Ajanta will never cease, Ellora is an architectural marvel in its own right. It is a wonderful conglomeration of the symbols and iconography of three different religions, and therein lies its uniqueness.

The MTDC Holiday Resort (Tel: 02438-244230; Tariff: ₹1,850–2,500) is on Fardapur-Jalgaon Road, 5 km from the caves. It has a restaurant with a bar. Ajanta T Junction Resort (Cell: 08879222035; Tariff: ₹2,600) is another MTDC property located close by. Though it is wiser to eat at your hotel, you can try MTDC’s Kanhaiya Kunj situated near the bus stand or the Vihara Restaurant, a multi-cuisine restaurant near Holiday Resort, Fardapur.

MTDC’s Ellora Restaurant has moderately priced dishes, thalis and hey, cold beer. Heritage Restaurant at Hotel Kailas serves Indian as well as Chinese dishes. Nearby, Milan Restaurant, is a snack stop. Then there are roadside stalls that sell bhajias. 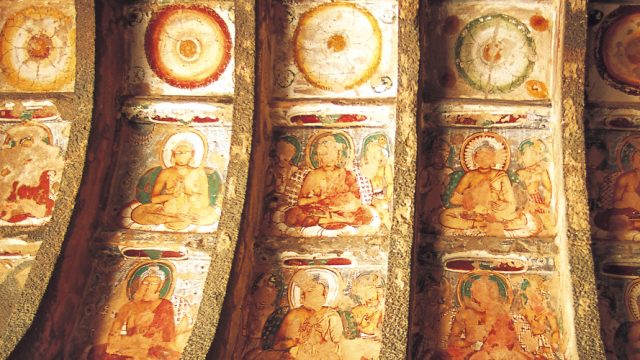 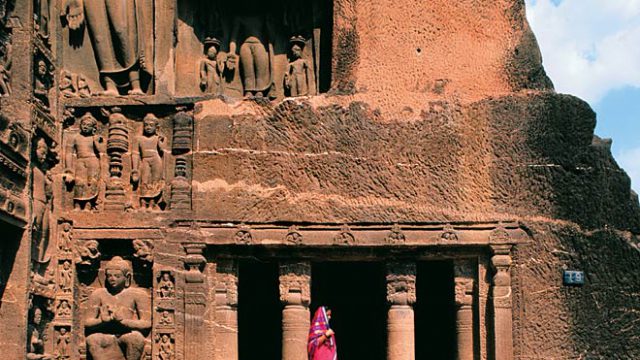 From wildlife-spotting at close quarters to marveling at the magnificent rock-cut caves of Ajanta and Ellora, here’s why a trip to Maharashtra beckons