There is something magical about Jodhpur. I knew that when I first set foot here

as a child and my most recent visit only confirmed that belief. Pink sandstone and clear blue skies greeted me once again as I stepped out of the train into the hustle and bustle of the Station Road. A lot had changed and yet, in many ways, nothing had. Jodhpur was no longer as green as it used to be, and the winds of modernity had taken away some of its delectable small-town feel. But, like a reassuring constant, the Mehrangarh Fort loomed over the skyline, as it did in my memories.

I had lived in Jodhpur for a few years a decade ago, and on this return, waves of nostalgia swept me over. A part of me felt like a tourist, marvelling at angles and perspectives hitherto unexplored, discovering treasures amidst everything I had taken for granted when I was a resident of the Blue City. A part of me rejoiced at what I knew was indeed my homecoming and I savoured every part of the trip, exulting in the rediscovery of Jodhpur’s architecture, colours and history.

Rao Jodha of the Kanauj family founded the house of Jodhpur in Marwar, the Land of ‘Maroo’ or death, thus named because of the region’s extremely hostile living conditions. Their first capital was at Mandore, an honour which went to Jodhpur after the Mehrangarh Fort was constructed towards the end of the 15th century. The fort was built with defence in mind, and the slopes and the sudden twists and turns in the structure were meant to hinder the movement of enemy elephants. There was good reason for this too – the state was often at war with the neighbouring Rajputs and Mughals.

Nevertheless, the Rathore clan managed to hold on to its possessions and expanded over time. It eventually rose to become one of the strongest and biggest kingdoms of Rajasthan, along with Mewar and Amber.

It is said that at the time of Independence, Jodhpur was so prosperous that it was slated to be the capital of the new state of Rajputana in the Union of India. However, because of its distance from Delhi, and assorted political factors, it lost out to Jaipur.

Jodhpur is Rajasthan’s second largest city. The Old City that lends it the name Blue City is to the north, around the Mehrangarh Fort. It opens up into what is now the main city via the Sojati Gate and the Jalori Gate in the southern walls of the fort. The original capital of Mandore lies to the north of the town. The Station Road is the hub of all activity. A good place for shopping, it has a number of budget hotels and several travel agencies. The Station Road leads on to the Sojati Gate and Nai Sarak areas, which are the important commercial hubs. The airport is situated near Ratanada, 6km from the main town.

Jodhpur has good local transport, comprising buses and autos (for some reason, more popularly known as taxis). The main bus stand is at Raika Bagh and the local buses take you almost anywhere within Jodhpur and also to Mandore and Kaylana Lake, on the Jodhpur-Jaisalmer Road. Autos don’t run on meter and what you end up paying will mostly depend on your bargaining skills. Ideally, the fare should range between ₹75–100 for a short distance and ₹10 per km for a full day-trip around the city.

The most comfortable way of moving around is to hire a taxi from a travel agency or hotel. The average fare is ₹2,500–3,000 for a day.

The palace is a magnificent structure representative of the Indo-Saracenic style of architecture. It is made of sandstone that has been put together without the use of mortar.

Umaid Singh, the then Maharaja of Jodhpur, ordered the construction of the palace in order to provide employment to the people affected by the famine of the late 1920s. The project took 15 years to complete and gave employment to 3,000 artisans. In 1977, following the abolition of the princely states’ privy purses, the current royal Maharaja Gaj Singh converted a part of the palace into a hotel. Today, the palace is divided into three sections: the royal residence, the hotel that is now run by the Taj Group and a museum. The royal wing is closed to tourists. To enter the hotel, one has to pay a cover charge of ₹6,000 per head, which is then adjusted against the expenses of eating and drinking inside the hotel.

The museum has a display of royal artefacts collected over the years, such as crystals, clocks, crockery and anything else that might have caught the royal fancy. The clock collection is perhaps the most interesting of all.

Location To the east of the town, adjacent to the cantonment Museum entry Indians ₹30; Foreigners ₹100 Timings 9.00am–5.00pm Photography Not allowed

The most imposing structure in Jodhpur is also the biggest fort in Rajasthan. Built atop a 150-m-high hill in 1459 by Rao Jodha, the fort has withstood many a battle, as is evident today from the marks of cannonballs on the fort walls. The entrance ticket has to be bought at the main entrance at Jai Pol, built by Maharaja Man Singh. From here you can either climb up or take the elevator service. For me, the best part of any visit to the fort is the walk up to the ramparts, and beyond that to the temple located in one corner of the fort. The view from here, of the entire city, is simply breathtaking. To the south you can see the Umaid Bhawan Palace and closer to the fort, the Old City, famously painted blue to ward off Marwar’s terrible heat.

Swords on display in the fort’s museum
Gireesh GV

There is a museum here with an exquisite collection of artefacts, including some very fascinating war booty and even more fascinating armoury (perhaps some of the deadliest looking swords one might ever get to see). The first several rooms of the museum are arranged around a courtyard called Sangar Chowki, where coronations were held until 1952. Inside, in the delicately worked sandstone apartments, there is a wonderful collection of palanquins and elephant seats (howdahs), the outstanding one being a silver howdah gifted by Shahjahan. It is decorated with a relief of lions, whose faces look peculiarly like shocked Rajput warriors. Up one level is a room full of excellent miniature paintings in the Marwar style of the 18th and the 19th centuries. After this comes a series of apartments decorated with gilded wood, Murano glassware and Chinese tiles – an opulent mix-and-match from different regions and historical periods that covers every available square inch of space. The royal splendour of the first family of Marwar is evident in the spread of costumes on display.

The Zenana Mahal and the Phool Mahal have frescoes and stained glass. If you want to pick up souvenirs, the museum gift shop has designer items as well as stalls run by local craftspersons.

When you’re done with the museum, turn left and take a 500m walk past the Chamunda Mata Temple to catch wonderful views of the Old City. Return to the right of the museum to exit the fort via Loha Pol, where you can see handprints of Raja Man Singh’s widows, who committed sati in 1843. On your way down you’ll pass Rao Jodha Ka Phalsa, where folk musicians will greet you. This used to be the last point of the old fort in the times of Rao Jodha. Walk past Fateh Pol and turn right for Jai Pol to exit the fort. To get to the Old City go straight down from Fateh Pol.

This is a beautiful marble cenotaph built by Sardar Singhji in the memory of his father, Maharaja Jaswant Singh II, who ruled over Marwar in the latter part of the 19th century. Jaswant Singh tried to set up a welfare state and was known for his reform measures. The grounds around it became the crematorium for subsequent rulers.

The erstwhile capital of Marwar, Mandore lies on the outskirts of Jodhpur, about 9km north of the main city. The Mandore Gardens today are better known for the cenotaphs of the former rulers, built not in the style of chhatris, but like temples. The Hall of Heroes and the Shrine of the Three Hundred Million Gods here are worth a dekko. Further ahead lie the ruins of the abandoned Mandore City, which today serve as the stage for a number of cultural programmes. Also at Mandore is a temple dedicated to Mirabai.

The best mid-range option in town is Devi Bhawan (Tel: 2511067; Tariff: ₹3,285–3,725), a guesthouse set around a spacious garden. The rooms are large and clean, with antique wooden furniture.

The Chokelao Mahal Terrace is an evening restaurant at the Mehrangarh Fort. You can enjoy a beautiful view of the lit up city as you enjoy a traditional Rajasthani thali on the ramparts. The non-vegetarian thali is highly recommended. Booking in advance is mandatory to get a table.

Nirali Dhani, on Chopasani Road, is another option if you want a traditional menu and ambience. The cover charge per person includes an unlimited supply of food. The Gypsy restaurant chain is very popular. Their chhach and thalis are worth trying. On the Rocks, near Ajit Bhawan, has a bar and a discotheque and boasts of lovely confectionery. Don’t miss the kachoris, samosas and mirchi vadas served at Sojati Gate.

When to go October to March

Road Travellers from Delhi should turn off NH48 on to NH25 at Beawar. At Bar, turn right onto NH112 for Jodhpur via Nimaj 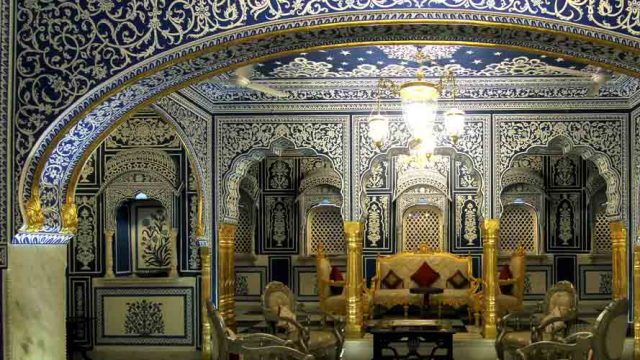