Home to one of the wonders of the world, the Taj Mahal in Agra is

a sneak peek into the architectural history with -other structures such as Agra Fort and Fatehpur Sikri nearby. It makes for a must-visit destination for tourists and locals alike. The monuments of Agra hide in their penumbra numerous stories about the mighty Mughals: tales of their loves and passions, their devotion to the arts, their tremendous energy and lust for power. Agra became the theatre where this fascinating dynasty played out an entire range of human emotions on a titanic scale. However, their most enduring legacy remains the monuments they built, which continue to spellbind their audience to this day.

If you want a serious look, spend at least four days exploring Agra and Fatehpur Sikri.

Commissioned by Mughal emperor Shah Jahan, the Taj Mahal was built to house the remains of his wife, famously known as Mumtaz Mahal, who died while giving birth to their 14th child in 1631 CE. Construction began in 1631 and material was sourced from all over India and overseas. While the signature white marble was ordered from Makrana in Rajasthan and jasper from Punjab, other precious stones came from far and wide – the jade and crystal were brought from China, carnelian from Arabia, lapis lazuli from Afghanistan and so on. In choosing the very best of everything, Shah Jahan left no stone unturned. The mausoleum was completed in 1648 and the out-lying structures such as subsidiary tombs, waterworks as well as the gardens five years later, in 1653.

The complex can be reached via three entrances, namely the Western, Eastern and Southern gates. The latter, in the middle of the chaotic lanes of Taj Ganj, is relatively less crowded. Once you enter the mausoleum complex, it is a short walk to the impressive Darwaza-e-Rauza or royal gate. This gate is 105- ft-tall and features 22 chhatris at the top that are said to represent the 22 years of construction of the complex. Made of red sandstone, the royal gate is adorned with intricate marble work and imposing archways and framed with inlaid verses from the Quran. The central arch here offers a full view of the entire complex – the mausoleum, its four minarets and the ornamental Persian gardens.

The Taj Mahal is set in a vast garden divided by walkways and water channels into four smaller parts). The base structure of the Taj is a cubic building with chamfered corners that creates an octagonal architectural footprint. Each of the 180-ft long sides of this octagon is embellished with an iwan (vaulted hollow space, walled on three sides) framed by a pishtaq (arched gateway to the iwan). Two similar pishtaqs, one stacked above the other, flank the iwan on either side. The short, chamfered sides of the building replicate the stacked pishtaq design, thus making the building appear symmetrical from all directions. The base is crowned by a large onion-shaped dome, 58ft in diameter and 213ft in height, perhaps the most defining feature of the mausoleum owing to its sheer scale. Four additional domed chhatris, much smaller in size, are placed on the main dome’s four corners, and do well to underscore its massive proportions. All five domes are topped by distinctive gilded finials. Four 163-ft-tall minarets frame the raised plinth that the mausoleum rests upon. These pillars, each topped by a chhatri, maintain the general sense of balance and add three-dimensional detail to the edifice. They are tilted about four degrees at an external angle to prevent destroying the central structure in the event of an earthquake.

The graves of Mumtaz Mahal and Shah Jahan

In its use of harmonious decorative elements the Taj Mahal has no parallel. Quranic verses are inscribed in various sections of the mausoleum’s outer walls, in an ancient Islamic calligraphic script known as Thuluth. Made of inky jasper and inlaid in marble, the calligraphy presents an arresting black-on-white contrast. The lower walls are adorned with dados (marble panels) with carved depictions of blooming flowers that break the monotony of a plain expanse of marble. However, the most notable architectural attribute that is repeated throughout the complex is pietra dura (a formalised inlay technique). Although the art originated in Italy, its most sumptuous expression can be found in the Taj Mahal, where semi-precious stones such as lapis lazuli, jade, crystal and amethyst are embedded in geometric and floral designs on the marble surface.

The interior of the mausoleum is far less ostentatious, organized as it is around an octagonal chamber adorned with low-relief carvings and a lapidary of gemstones. However, the tranquil simplicity of the hall seems to be an ideal setting for the cenotaphs of Mumtaz and Shah Jahan, which are surrounded by a delicate filigree screen. Beneath these cenotaphs, at garden level, lie the true sarcophagi. Try arriving at the Taj at the break of dawn so that you are one of the first few to enter the complex.

Tip Buy shoe covers before you enter the Taj. You will not be required to take off your footwear if you don these. Carry water with you. Eatables are strictly prohibited here and security checks are strict – even diaries/ notebooks are not allowed! Deposit your belongings, for free, at counters near the ticket offices.

Agra Fort’s Diwan-e-Khas, with the Taj Mahal in the backdrop

This fort is a testimony to the Mughal Dynasty’s unparalleled aesthetic and architectural sense. Built over time by Akbar, Jahangir, Shah Jahan and Aurangzeb, it has the impression of all the four emperors’ preferences and styles. However, only 25 per cent of the fort is accessible – the rest is occupied by the Indian army.

It was during Shah Jahan’s reign that the fort took on its current shape. When he was deposed by his son Aurangzeb, Shah Jahan was imprisoned in this very fort, in a tower that overlooked his beloved’s mausoleum, the Taj Mahal.

An imposing 70-ft fortification wall encloses 94 acres of land within. The entrance gate is inlaid with mosaic work, with elaborate patterns on the floor, and was reserved for the royal entourage. As you climb up, to the left are the quarters now used by the Indian army. Ahead is another grand gate, with the Jahangir Palace to its left. There are sprawling lawns near the army quarters as well as the Jahangir Palace.

Built by Akbar, the façade of the Jehangir Palace has religious symbols of Christians, Muslims and Hindus, in alignment with his secular doctrine Din-e-Ilahi. The palace has been constructed in the Indo-Islamic architectural style; the façade made of red sandstone has two chhatris at both ends. The sandstone walls kept the interiors warm and hence Jehangir Palace was the designated winter residence of the rulers. You will find remnants of the temple that Akbar built for Jodha Bai, which was later destroyed by Aurangzeb.

Next, head towards the Hawa Mahal. The hollow walls of the building allowed water to trickle in the gaps, which kept the room naturally cool.

Further down is the Sheesh Mahal, now inaccessible to visitors; you can only look through the grills. This palace is actually a Turkish bath made by Shah Jahan for Mumtaz Mahal. The interiors are of limestone, with pieces of glass fitted on the walls.

A little ahead of the Sheesh Mahal is the Noor Palace. Originally made of sandstone, it was trans-formed by Shah Jahan into white marble. This is where Shah Jahan was imprisoned for the last eight years of his life. The smooth marble walls of the palace are inlaid with lapis lazuli, granite, black onyx, coral and turquoise that glow in the light, making for a mesmerising sight on the night of full moon.

The passage ahead leads to a hall, which was used by Shah Jahan as a prayer room. This room directs one to the beautiful Diwan-e-Khas, or the special court pavilion. The magnificent slab of black onyx, imported from Belgium, where the king used to sit, is still present. Known as Takht-e-Jahangir (Seat of Jahangir). On the other side of the courtyard are the administrative halls, accompanied by a colonnaded corridor. At one end of the corridor is what used to be a prayer room for the ladies of the harem. Enclosed with intricately patterned jalis, the limestone walls kept the temperature low.

This prayer room opened up to the Diwan-e-Aam. The king used to sit on a pedestal where the Peacock Throne, bedecked with precious gemstones and the Kohinoor diamond were kept. This colonnaded court is currently the venue for the Sound and Light Show.

Akbar built this city in the little village of Sikri, west of Agra, owing to the hallowed presence of Shaikh Salim Chishti, the Sufi saint who told the heirless king that he would soon be blessed by sons. Akbar chose red sandstone to minimise the stylistic clashes arising from the mixing of Timurid, Persian and Indian architectural styles. An astonishing city took shape: pavilions and courtyards, domes, balconies, gardens, cupolas, tanks, pools and baths. The architecture sheltered the occupants from the harsh north Indian sun, but also allowed for the play of filtered or refracted light and air through latticed windows and doors. Fourteen years after its construction, Akbar and his court left Fatehpur Sikri forever, moving the capital to Lahore. You can follow the spirits of Akbar, his wives, his Nine Jewels, ladies of the harem through Buland Darwaza – the highest gate in India, Jodha Bai’s Palace, Maryam’s House, Birbal’s House, Daulat Khana, Diwan-Khana-i-Khas, Diwan-i-Aam and Pachisi.

When to go In the cold season (November to March)

Air Agra’s Kheria Airport is connected to Delhi by Air India, which operates flights only in winter 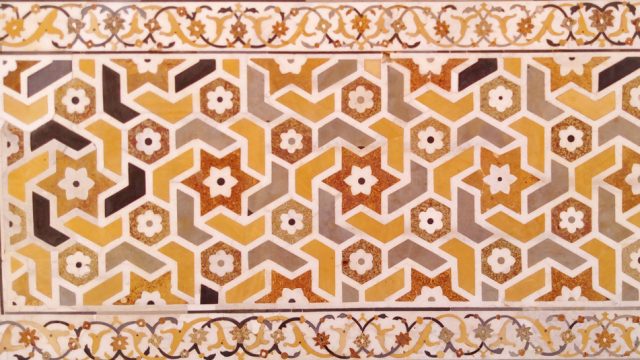 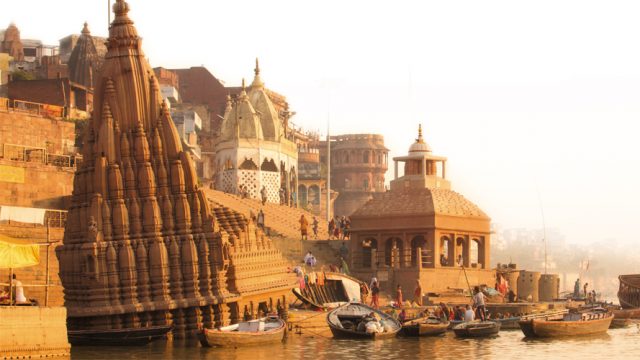 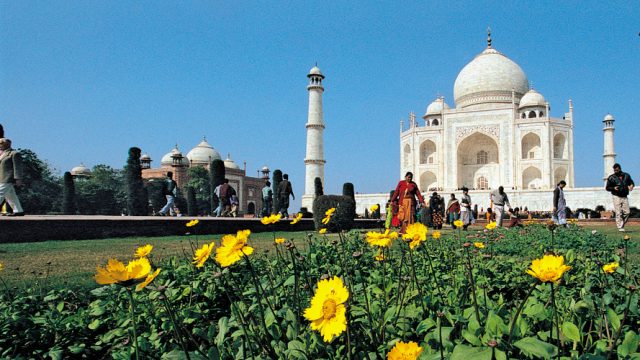