The Festival of Colours, known as Holi in rest of India, is called ‘dol-jatra’ in Bengal. In

Bengal, it is celebrated on the full moon day (March 1 this year). Here are three places where you can enjoy the festival in different moods.

Amadpur
Head to Amadpur, tucked deep inside Burdwan district of West Bengal, if you want to celebrate Doljatra with a traditional flourish. The picturesque setting and a chance to play with colours with the local people adds to the festive fervour. The Chaudhuri family, the former zamindars (landlords), have not only beautifully maintained their nearly 400 year-old family home but also observe all the major festivals. The Chaudhuri home, which sits on the edge of a lake with a paved bank and steps going into the water, is fronted by four terracotta temples dedicated to Shiva and a ‘dol mancha’ (a stage for celebrating doljatra). Radhamadhav, the family deity, resides in another old terracotta temple nearby. The temples, over two centuries old, reflect typical old Bengal architecture and contain carved terracotta panels on the outer walls. The Dol Mancha, also a reflection of typical Bengal architecture, backs on to the bank of the lake.

The Dol Mancha is in the centre
Uttara Gangopadhyay

On the eve of Doljatra, the ‘Lakshmi Janardan shaligram shila’ is carried to the Dol Mancha prior to the holding of the bonfire or the ‘chanchor’ festival. After the festivals, the ‘shaligram shila’ is taken back to the temple. On the day of Doljatra, the deities of Radha Madhav are carried in a procession to the Dol Mancha. Among several rituals performed here, one is the ‘Deb Dol’, where the deities are believed to play with coloured powder or ‘abir’ among themselves. Subsequently, the family members and the local people offer coloured powder to the idols. It also customary to apply the coloured powder to the feet of any senior first. Then begins the play of colours in earnest. You may participate in the ritual or watch it from the safety of the Choudhuri home.

Bolpur
Noble Laureate poet Rabindranath Tagore, the great visionary that he was, introduced season-based festivals, shorn of any religious association, to Viswa Bharati, the school and university founded by him in Shantiniketan in West Bengal. So on the day of Doljatra, Shantiniketan observes ‘Vasantotsav’ or the Spring Festival.

The day dawns with students and teachers performing a ‘prabhat feri’ or a ‘morning procession’ singing songs penned by Tagore. Then students, teachers and other residents start gathering at the university complex. While men usually don white attire, women wear a yellow sari with red borders. Earlier, women would use the abundantly found red Palash flower to make floral ornaments but the practice has stopped over the past few years. Singing and dancing, to songs penned by Tagore, is the highlight of the day. The coloured powder or ‘abir’ is first applied to the feet of elders and then everyone begins smearing each other with colours. As the day lengthens, the participants break into smaller groups and spend the day through more singing and dancing. Earlier, visitors too could join the celebrations but, according to some local residents, the rowdy behaviour by some visitors in the past has put an end to that.

Bolpur can be easily reached by road and rail from Kolkata. By road, it is about 60km and by train takes around 2.5 to 3.5 hours. Accommodation is aplenty but advance reservation is advisable because Doljatra is a popular festival here. If you are looking for a low-key holiday, there are several resorts and luxury homestays set back from the town (The Garden Bungalow, Raktakarabi Karuangan, Raater Tara Diner Rabi Guesthouse, Mark &amp; Meadows, etc).

Or you can book a package to celebrate Doljatra/Holi in Tepantar, about an hour’s drive from Bolpur. Located at a place called Satkahania (near Panagarh), it is a sprawling eco-friendly theatre village set up on a four-acre campus and run by a commune of theatre activists. While the festival is celebrated by day, cultural programmes are held in the evening. For more details and booking, contact Tour East, the travel arm of Kolkata-based Banglanatakdotcom (toureast@banglanatak.com).

The little known village of Nimdih, located on the border of West Bengal and Jharkhand, has a predominantly tribal population. It is also your window to observe Dol/Holi celebration by the local people.

The most convenient way to visit Nimdih during Holi, especially if you are a solo female traveller or a women’s group, is to avail a three-day package trip (starting 28 February and ending on 2 March afternoon) organised by Tour East (toureast@banglanatak.com; 8420106396 — 10 am to 7 pm). Simple but clean accommodation is provided at the Loksevayatan complex located within the foothills of the Dolma range. Here too, while you celebrate Holi by day, the evening is devoted to cultural programmes by the local people.

Nimdih can be reached by road from Purulia (West Bengal) or Jamshedpur (Jharkhand) depending on where you are coming from. You may also ask to know more about the Loksevayatan institute that provides the economically disenfranchised, underprivileged children with education, and promotes local folk culture. The institute was established in 1948 in the memory of Mahatma Gandhi by freedom fighters Subodh Kumar Roy and his wife Basanti Roy. 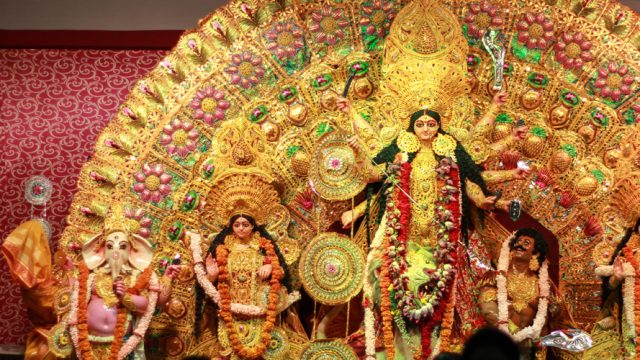