Round the year, hundreds of Hindu and Jain pilgrims visit Pavagadh, around 55km from Vadodara, the third

largest city in Gujarat. But only a handful know that they are entering a UNESCO World Heritage Site.

Known as the Champaner-Pavagadh Archaeological Park, the area won the honour in 2004.

According to UNESCO, ‘the site is the only complete and unchanged Islamic pre-Mughal city’, ‘a living cultural heritage’.

The area contains prehistoric (chalcolithic) sites, a hill fortress of an early Hindu capital, and remains of the 16th-century capital of the state of Gujarat as well as ruins of fortifications, palaces, religious buildings, residential precincts, agricultural structures and water installations, from the 8th to 14th centuries.

The Kalikamata Temple attracts numerous Hindu devotees throughout the year

The Kalikamata Temple on top of Pavagadh Hill an important shrine for the Hindus. At first glance, it looks no different from popular Hindu pilgrimage centres of north India. But accompanied by a local historian, you will be able to see ruins of former palaces and temples. Pilgrims either walk up the hill or take the cable car.

The Jain temples mostly belong to the Digmabar sect and are scattered in groups in Pavagadh and Champaner. The twin towns are located about five km apart.

It is said that Champaner was founded in the eighth century by King Vanraj Chavda. According to historians, along with neighbouring Pavagadh, it formed an important buffer between Gujarat and Mandu in Malwa (now Madhya Pradesh). The Chauhan Rajputs, who conquered the area around 1300 AD, ruled here for nearly two centuries. Although several Gujarat Sultans tried to capture Pavagadh, it was finally Mahmud Begda who managed to capture it, made it his capital and patronised a spate of constructions.

The Jami Masjid served as a model for later mosque architecture

One of the key criterion that earned the region its World Heritage Site status is the perfect blend of Hindu-Moslem architecture seen in many of the buildings. The Great Mosque (Jami Masjid) is said to have served as a model for later mosque architecture in India.

Conquered by Moghul emperor Humayun, the region slowly lost its importance and faded away. Pilgrims continued to visit to the Kalimata Temple but the ruins were overlooked. During the British rule, surveyors mentioned the ruins strewn here and some preliminary studies were made.

Maharaja Sayajirao University of Baroda initiated a seven-year study of the region in 1969, which brought light the growth and identity of the city.

Today, one can see part of the fortification, including the giant catapult stands apart from ruins of palaces, lakes and stepwells, gateways, granaries, etc.

Getting There: Champaner is 45 km by road from Vadodara, the nearest airport and rail link. Ahmedabad is around 190km from Vadodara by road.

Gujarat Tourism (https://www.gujarattourism.com) runs a Toran tourist lodge in Pavagadh. If you are looking for a luxury option, try Jambughoda Palace (http://www.jambughoda.com/index.html). You may stay at Vadodara and make a day-trip to the World Heritage Site. Carry sun protection gear, drinking water and snacks. Proper shoes must. November to February is the best time. 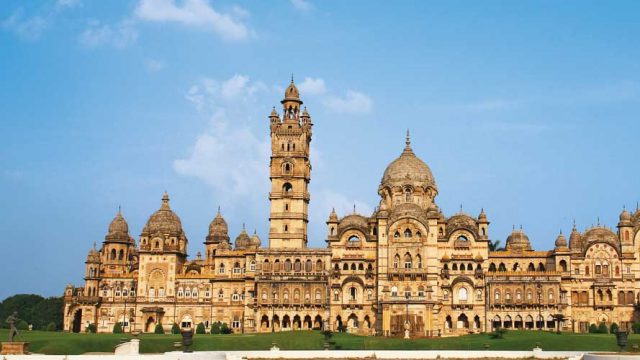 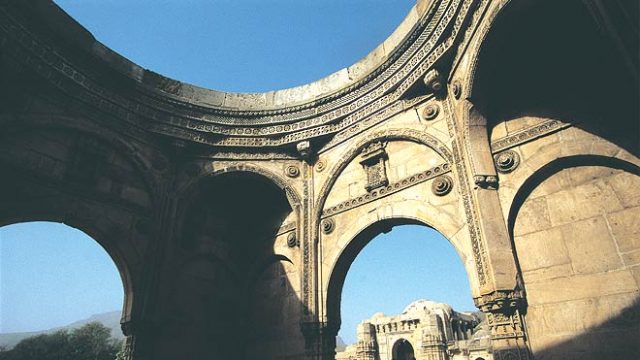